Like millions of viewers, I’m a big fan of The Walking Dead. If you haven’t seen it, check out the first episode of season one. Even if you’re not into zombies or grimace at the sight of the undead chewing on a leg like it’s smothered in seven herbs and spices, chances are you’ll be drawn in by the compelling story lines. If need be, just do as my wife does and cover your eyes at the particularly gory stuff.

Why bring up the zombie series? Nostalgia. Back in March of 2011, I wrote just my third piece here at The Hockey Writers about Dustin Brown, and it had a decidedly zombie-esque theme to it. Bringing back the zombie theme is my way of paying homage.

Judging by the Slava Voynov saga, present and future salary cap problems and the team’s on-ice performances, there are plenty of story lines to go around on this year’s Kings team. One of the overarching subplots is the ever-polarizing Brown.

Dustin Brown: love him or hate him

Dustin Brown is one of those guys destined to elicit strong opinions no matter what his demeanor. He plays a hard-nosed game, one that involves hitting first and asking questions later. Although just 41st overall this season with 66 hits, Brown was 9th in the NHL last year with 266, and has finished in the top five the majority of his nine-year career.

It’s not just the number of hits, it’s the timing of many of them, along with how truly devastating they can be. Brown’s infamous hit on Michal Rozsival during the 2012 Western Conference Finals led to this heated on-air exchange between Jeremy Roenick and Mike Milbury:

He’s at his best when employing a north/south style of play, handling the puck only as much as absolutely necessary and doing the dirty work around the net. When he strays from those tenets, he has a tendency to turn over the puck or otherwise get lost in the flow of the offense.

The Kings’ captain has been in a prolonged offensive slump

Minus a few games here and there, Dustin Brown has not been the same player since the start of the 2013-14 season. Some say it’s because he’s been bounced up and down the lines, ending up on the third line more often than not. Others point out that he was a top-six fixture until his struggles, demoted only after his slump became untenable. No matter what the reason, Brown managed just 27 points in 79 games last year, his lowest full-season total of his career.

The slump carried over to this season, with Brown recording just two points over his first eighteen games. It wasn’t for lack of opportunity: he put 41 shots on net during that span, averaging about 17 minutes of ice time while doing so.

The whispers grew louder. Maybe Brown’s age had something to do with it. After all, he’s now 30, and with all the games played and rugged on-ice battles he’s endured, there’s some pretty high mileage on that chassis.

Think #DustinBrown is tired of being asked if being 30 feels any different? #GreatQuestion #lakings… http://t.co/JWKTEzRRwG

Since the Panthers game, the old Dustin Brown is back

At the very nadir of his slump and despite playing a season-low 14:02, Brown scored a power play goal against the Florida Panthers on November 18th, sealing a 5-2 Kings win. That tally seemed to spark the venerable power forward’s offense, to the tune of four goals and four assists in his past nine games.

Why has his game picked up? For one, he’s putting more pucks on net. In the eight games prior to his Florida goal, he had just 16 shots on net. In the eight games since, he’s got 20. He’s also doing a better job sticking to his north/south strengths, and as a result, he’s getting more ice time. After hovering near the 14 minutes/game mark earlier, he’s up to 18 again.

Lastly and perhaps most importantly, he’s not clutching his stick tightly like he was before. Despite being a long-time veteran, Brown isn’t immune to the tricks the mind plays during a slump. After all, as Yogi Berra once famously said, 90% of the game is half mental. 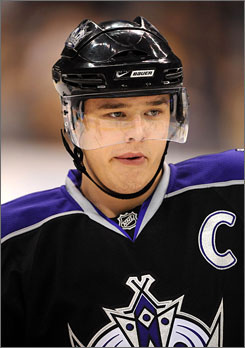 Brown has a big contract to live up to

Speaking of the mental aspects of the game, it’s possible that living up to the eight-year, $46 million contract extension Dustin Brown signed in July, 2013 is weighing on his mind.

Whether it is or isn’t, the fact remains that he does need to perform for the big contract to payoff for Los Angeles. Sure, he’s led the Kings to two Cups in three years, but seven more seasons is a long, long time in hockey years, and that’s likely how long the Kings captain will be patrolling the ice at the Staples Center.

Yes, his regular season last year was the worst of his career, redeemed in the best way possible by a Stanley Cup championship. And yes, his start to the 2014-15 campaign was poor. However, judging by the past nine games, the old Dustin Brown has finally returned. And in about two more months, so will The Walking Dead.