In my previous post, I proposed a few questions to the Los Angeles Kings fan base; primarily whether Darryl Sutter or Dean Lombardi, or maybe both, are to blame for the team’s struggles the past few years.  The Kings might have been officially eliminated from playoff contention after Sunday night’s loss to the Arizona Coyotes, but let’s examine just how good this year’s team really was despite missing the playoffs.

Looking at the Kings’ individual player stats, the first thing one should notice is the lack of point production; there are only four players who have reached the 40-point plateau, and only one who has reached 60-points. Two of the top five players are defensemen, and three of the top ten. Based off nothing more than point production and knowledge of Peter Budaj’s goaltending statistics [2.12 GAA; .917 sv%; 7 shutouts], I initially deduced the following:

Stat Kings: Cards On The Table 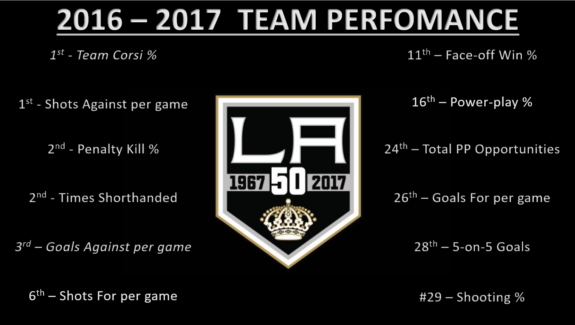 What’s missing from this graphic is that the Kings have scored twenty-four percent of their goals on the power play – top-3 in the league.

What Are The Odds?

Given Budaj’s statistics, I expected to see the fantastic defensive rankings. What caught me by surprise were some of the phenomenal offensive rankings: 1st in team Corsi-rating, 6th in shots for per game, 11th in face-off win percentage. (For anyone unfamiliar with Corsi-rating, on its most basic level, it’s a way to interpret team puck-possession.)

If the Kings are typically generating more shots towards the opponents’ goal than they are giving up, but they are still not scoring and are losing games, it makes perfect sense that the team suffers from a low shooting-percentage (29th in the NHL). This is an issue that neither the coach nor the general manager can really fix, and in fact, it can be argued that this may have been one of the better teams Dean Lombardi has assembled in his 11-year tenure with the Kings, and they just somehow all ran cold; though at the same time it can also be argued that this is the one of the worst.

In analyzing all of these team statistics, if the Kings had even the league-average in shooting-percentage, then they would have scored 35 more goals to date – good for 13th in the NHL, up from 26th. These additional 35 goals would also increase their goal differential to +34, good for 6th in the NHL, 1st in the Pacific Division, and only one goal behind the Chicago Blackhawks for 1st in Western Conference.

It’s likely that with just a league-average shooting percentage – even with all else remaining the same – that this Kings team may have won the Pacific Division for the first time since Lombardi took the reins in 2006. Unfortunately, they couldn’t put the entire puzzle together.

And remember, all of this was without Jonathan Quick for 59 games of the season. Quick’s absence was most felt, however, on the practice ice. The difference between shooting against Jeff Zatkoff compared to Quick, may not have pushed the players’ limits on a daily basis the way the team needed.

That being said, many fans in Los Angeles have been questioning Lombardi following what appeared to some managerial missteps. Fans, past and present, have also been questioning Sutter’s ability to coach in the regular season. Given this deeper analysis of the Kings’ season, I would not favor a coaching move to John Stevens at this time. Jonathan Quick’s absence as a leader and the team’s inability to find the back of the net are not a result of Sutter’s coaching. The fact that it took 78 games for the Kings to be eliminated from playoffs could make this one of Sutter’s best regular-season coaching performances of his career.

Weigh in with your comments below.