Whether or not to dethrone head coach Darryl Sutter is the question Los Angeles Kings general manager Dean Lombardi must be asking with seven games left in the season and the Kings sitting 11 points back of the St. Louis Blues for the second wildcard spot in the Western Conference. The Kings begin a three-game Western Canada road trip this week with six-of-eight remaining games against teams currently in playoff positions.

Barring a miracle, the Kings will miss the playoffs for the second time in three seasons. Sutter must be feeling the warmth emanating from his coach’s room chair after Lombardi was a buyer at last month’s trade deadline and Sutter was unable to turn those moves into a successful playoff push.

Sutter previously led the Kings to two Stanley Cup championship runs (2012 and 2014) despite entering those playoffs as an eighth and a sixth seed, respectively.  It is clear that he is a playoff coach, but proving as much requires the team to actually make the playoffs. What is unclear is if the Kings’ regular season woes are a result of poor coaching or an inevitable result of the teams Lombardi has put together.

To me, in reality, Lombardi should probably be eating the blame for the King’s woes, but when was the last time you saw a team President/GM fire himself? Now in his 11th season as the King’s GM — Lombardi was hired in April 2006 — the Kings have yet to win a Pacific Division title. Even in their two cup-winning seasons, the team finished third in the Pacific Division. Under Lombardi, the Kings have missed the playoffs five times. 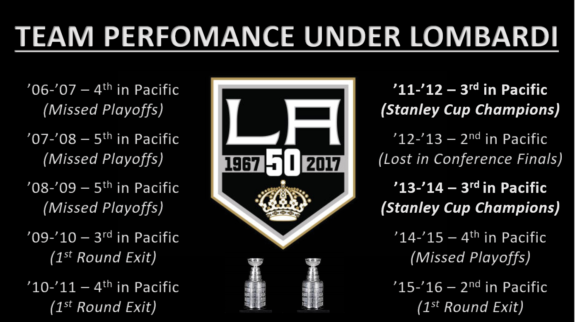 Additionally, the King’s AHL affiliate, the Ontario Reign, is full of older players past their NHL prime, such as Devin Setoguchi, Rob Scuderi, Paul Bissonnette, Teddy Purcell and TJ Hensick. In today’s NHL, you need an AHL affiliate full of young talent and prospects, not players who are holding onto careers that have passed them by. In other words, it’s not like the organizational future is that bright for the Kings, and that lies purely on the shoulders of the GM.

Lombardi’s performance has been quite a quick change since THW writer Cole Querry described him as a transactional genius back in 2015. It’s not that Querry was wrong in his analysis and commentary at the time — it’s that Lombardi has seemingly lost a major step or two.

He failed to re-sign Milan Lucic following last season, and he’s made a number of other failed signings and questionable trades. Further evidence that Lombardi is not performing up to the standards that Kings fans had become accustomed to was his performance as the GM of Team USA during last year’s World Cup.

I think most hockey fans will remember the following controversy:

Just sitting around the house tonight w my dog. Felt like I should be doing something important, but couldn't put my finger on it.

Kings Assistant Coach, John Stevens, has long been a commodity wanted by other NHL teams to fill their vacant head coaching positions. However, the Kings have consistently prohibited those teams from entering into talks with Stevens or his agent. It’s been speculated that he’s in line to take the reins if/when the Kings’ throne becomes available, but with Sutter having signed a three-year extension following last season it is anyone’s guess when that might be.

Stevens, who is in his sixth season with the Kings, has head coaching experience in both the NHL and AHL with the Philadelphia Flyers organization. He lead the Flyers to an Eastern Conference finals in 2008 while winning The Hockey News coach of the year award. He also lead the Flyer’s AHL affiliate to a Calder Cup championship in 2005 and is an AHL Hall-of-Fame inductee.

Would you be in favor of a coaching change to John Stevens?  Comment below.