These days, there is not anything special about the Arizona Coyotes.

In fact, their special teams, once a fundamental part of the Coyotes’ arsenal, has failed miserably. Not only is the power play ineffective, but their ability to kill penalties has been the subject of recent concern. While coach Dave Tippett said the penalty killing execution needs to be revamped, the power play has also fallen on tough times.

At this point of the season, the offense, in general, needs a desperate shot of adrenaline. After dropping a 2-1 decision to the Buffalo Sabres before 11,134 in Gila River Arena, the Coyotes have scored just once  since captain Shane Doan scored at 18:50 of the second period Jan. 14 against Detroit. That’s over two games plus an overtime in the Red Wings games.

Given the ebb and flow of a protracted 82 game schedule, there appears to be little concern on the part of the participants. If the Coyotes are having difficulty finding the net these days, things, tend to balance out. That’s the belief of Tippett, who offered a rather casual explanation after the recent defeat to the Sabres.

“We go through cycles in this game,” he said. “Also, we’re getting into the second half of the season. Teams are scrambling for points and playing a tougher game. For us, we need to find ways to score.”

While goaltender Louis Domingue was creditable in net, the team in front of him allowed two power play goals. Those tallies were in concert with the Coyotes’ inability to shut down their opponent’s power play. Coming into the Sabres game, Arizona was 27th overall in killing penalties, and 28th at home. They have also allowed eight short-handed goals, and that’s worst in the league.

For the game, the Sabres were 2-for-2 with the man advantage, and the Coyotes were 0-for-5.

“(On killing penalties), we’re doing what we’re supposed to be doing,” said defenseman Michael Stone, who was on the ice for both Sabres power play goals. “We have a good structure to our PK, but need to be more consistent. Also, we’re taking more penalties and that always puts pressure on your PK.” 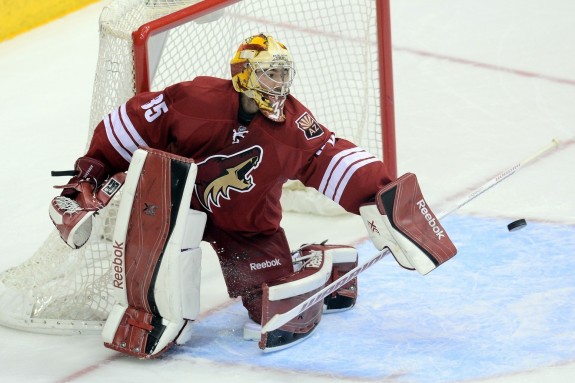 For the most part, the Coyotes appear satisfied with their play and their ability to generate chances. In the course of the season, there will be highs and lows and, right now, this is a considered a low point.

“I thought we generated good chances,” said Antoine Vermette, who was credited with the only Arizona goal. “We have the momentum, but some nights, you have to find a way to score.

Vermette’s tally was a fortunate break for the Coyotes. Down 2-0 mid-way through the final period, Vermette’s shot from a sharp angle on the right side, deflected off of goalie Chad Johnson and found its way beyond the goal line. From that point, Johnson frustrated the Coyotes down the stretch, and ended up turning away 26 of 27 Arizona shots. In the process, he evened his season mark to 12-12-2.

Because the Coyotes have scored one goal in their last two games, that is little reason for concern. This appeared to be the consensus in the Arizona dressing room after the loss to the Sabres. Then again, Domingue’s observation seemed to be especially right for the moment.

The Need To Score

“We won’t score five goals every night,” he said after stopping 26 of 28 Buffalo shots. “We can take the frustration from (Monday night) and use that into positive energy. We have two big games coming up, and need to be ready.”

The reference here is contests with the San Jose Sharks at home this Thursday night and the L. A. Kings, also at home, on Saturday.Going into play Monday night, the Kings held an 11-point lead over Arizona atop the Pacific Division.

With the loss Monday night, the Coyotes remained one point ahead of the Sharks, who played Ottawa Monday night at home, and in second place in the Pacific Division. Both the Coyotes and Sharks are off until Thursday when they meet in the Gila River Arena.

With one goal in their last two games and hanging precariously into the second spot within the division, there is no time like the present for Coyotes to shake the cobwebs and create some thunder.

After the final horn, the Coyotes and Sabres engaged in a clash of armor.

The Sabres appeared to be going after rookie Anthony Duclair for most of the game, and Duclair was a major combatant after the final whistle. In all, five players were given misconduct penalties and the Sabres’ Zach Bogosian was given a game misconduct. Duclair escaped with a roughing minor,  but teammates Oliver Ekman_Larsson, Shane Doan and Vermette were all given misconduct penalties. Bogosian was hit with a roughing minor, a fighting major on top of the game misconduct. Also, the Sabres’ Rasmus Ristolainen received a misconduct.