The Tampa Bay Lightning fell to the Nashville Predators 6-1 in to end the team’s five-game home stand at Amalie Arena on Thursday. For the Lightning, it was a disappointing ending to a home stand that saw them go 2-2-1, including a big win over the Atlantic Division leading Montreal Canadiens on Dec. 28.

The Lightning outshot the Predators 28-19 on the night and had 69 shot attempts to Nashville’s 35. However, the Predators blocked 24 of those attempts — a telling statistic for a Lightning team that couldn’t seem to find their rhythm in a game where earning two points was crucial given the current playoff picture in the Eastern Conference.

Andrei Vasilevskiy made 13 saves on 18 shots, while Pekka Rinne stopped 27 saves in the winning effort. The Lightning converted on 1-of-4 power play opportunities and the Predators converted one time with the man advantage on three attempts. 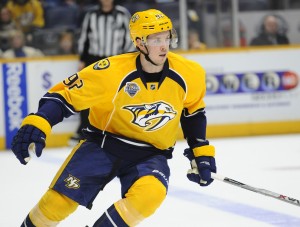 After the Lightning fell behind 2-0 early in the second period, they received a jolt when Tyler Johnson beat Rinne on the power play, but the momentum was short-lived as the Predators tallied two more goals late in the period to make it a 4-1 game going into the final session. The Lightning pulled Vasilevskiy with just over seven minutes to play and Colton Sissons scored his second of the game on the empty net. Vasilevskiy returned to the net and Sissons capped the hat trick late in the period to give the Predators the 6-1 lead with minutes to play.

The Lightning have dropped to 19-17-4 on the season and their 42 points are three behind the Philadelphia Flyers for the final wild card playoff spot in the Eastern Conference — a team they will face on Saturday in the first of back-to-back contests this weekend.

Let’s take a closer look at how things played out on Thursday:

The game got off to a slow start before Tyler Johnson was called for slashing at just past the two-minute mark of the period setting up the Predators’ first power play. The Predators made quick work of the man advantage, as Ryan Johansen fed a pass in front of the Lightning net and Mike Fisher fired it past Andrei Vasilevskiy for a 1-0 lead.

The Lightning did not register a shot on goal until their first power-play opportunity at the 10:47 mark while on the power play. After the Predators were called for too many men on the ice, the Lightning began their second power play of the contest but they were unable to smoothly enter the Predators’ defensive zone and were kept off the board.

With less than three minutes left in the period, J.T. Brown dropped the gloves with Austin Watson — earning the biggest cheers of the entire period from the fans at Amalie Arena. Each player was given a five-minute major for fighting, but Brown received an extra two-minute penalty for roughing, giving the Predators their third power play of the period.

The Lightning held off the Predators power play and the period ended with the Lightning trailing 1-0, but leading in shots, 5-4.

Filip Forsberg gave the Predators a two-goal lead when he fired a puck towards the Lightning net from the right boards and it snuck past the glove side of Vasilevskiy as the period approached the four-minute mark. It looked as though Vasilevskiy may have been shielded briefly by Victor Hedman, as it was the kind of shot the Russian netminder would have normally stopped.

The momentum shifted in the Lightning’s favor for a time after Tyler Johnson ripped a wrist shot past Pekka Rinne on the power play for his 12th goal of the year, making it a 2-1 game at the 6:12 mark.

Late in the period, however, the Predators scored a pair of goals in just 43 seconds, as Colton Sissons and Ryan Ellis each found the back of the net. Nashville carried a 4-1 lead into the intermission, despite being outshot by the Lightning, 16 to 11.

The Lightning tallied 12 shots on goal during the final frame, but were unable to beat Rinne. With the team down 4-1 late in regulation, Lightning head coach Jon Cooper opted to pull Vasilevskiy for an extra attacker with around seven minutes left.

Sissons tallied his second goal of the game on an empty-netter and Vasilevskiy returned to the crease for the Lightning. Less than three minutes later, Sissons registered his third goal of the night for the hat trick — as he put an end to the 12-game goal drought he had carried into the contest.