The mayor of Quebec City Regis Labeaume will make a major announcement later today pertaining to the construction of a new arena. The press conference is scheduled for 1PM EDT at the City Hall on Sunday where all the main actors such as Mayor Labeaume, Quebecor’s Pierre-Karl Peladeau, Sam Hamad, the minister of Transports, and Michelle Courchesne, the minister responsible for Government Administration, will be present.

The presser will not be about the transfer of the Phoenix Coyotes to Quebec City, albeit the announcement will be a key step in bringing a professional hockey team back to the home of the defunct Nordiques. It is also reported that the new arena would be named Centre Quebecor and that Peladeau’s company would take care of the cost overruns of the construction of the arena, if any. The cost of the new arena is currently estimated at $400MM. 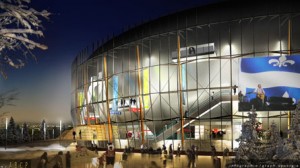 Last week, Darren Dreger of TSN tweeted that: “Unless progress is made this week in sale of Coyotes. NHL will begin Plan B investigation next week. Seattle, Qc City, Vegas and KC in the mix.” This news prompted Mayor Labeaume to accelerate the process regarding the planning of the next arena’s construction slated to begin in the fall of 2012 in order to be ready for the 2015-16 NHL season.

In the meantime, NHL representatives were seen at the Old Colisee Pepsi on March 22, 2012 where they were reportedly checking if the old arena would meet the NHL standards regarding air conditioning, ice conditions and standardized boards among other things.

The city is planning to retrofit the Colisee Pepsi as soon as the city’s junior team, the Quebec Remparts are eliminated from the QJMHL playoffs, in order to host a professional hockey team until the new area is ready in the fall of 2015.

The Remparts are currently leading their first round playoff series 1-0 against the Drummondville Voltigeurs. The attendance for the 1st game of the playoffs was almost 11,000 fans, which is more than what the Coyotes attract on average this season at their home games.

STAY TUNED AS I WILL UPDATE THE ARTICLE AS SOON I RECEIVE NEW INFORMATION ON THIS MATTER.

***The construction of the new arena will begin on the second week of September 2012, and the seating capacity will be around 18,000 seats, comparable to the new Penguins’ arena. A budget of $25MM has also been planned for cost overruns.***