Prior to last night’s loss in Boston, the Toronto Maple Leafs played what was easily their most impressive stretch of this season – perhaps dating back to before the 2004-05 lockout.

It wasn’t so much that they put together a four-game win streak – they’ve had many of those since that time, especially the last two seasons – but how they won them. Of the four victories, three were on the road, and two were played on the second night of a back-to-back, an area the team has struggled mightily in over the last number of seasons. Perhaps the best part of their run was that every game had a theme; a river through which their success in each individual game flowed.

Willy Walked It off in the Windy City

The streak started back on Jan. 24 in Chicago. The team was coming off a difficult loss to the Colorado Avalanche in which they were the better team and had a questionable goaltender interference call deny them the go-ahead goal in the second. Although they would get it moments later, the Avs would tie it up under two minutes after that and then pot two goals in the third (including an empty-netter) to take the game, 4-2.

Despite the fact the Leafs did deserve the win against Colorado, they didn’t get it. And with that, Mike Babcock put his lines in the proverbial blender the next day ahead of their game in Chicago. It would pay immediate dividends, as Mitch Marner – moved up off the fourth line to join Kadri and Marleau – scored the Leafs’ first goal and tied it at one in the first.

After being outshot 17-7 in the first, the Buds would carry the play carry the play through the second half of the game, outshooting Chicago 11-7 in the second and 13-12 in the third. The game was tied at two after 60, and the Leafs were heading to overtime again – something they had become quite familiar with in recent games. Right off the opening face-off of the additional session, Willy Nylander got in behind the D and was hooked onto by Duncan Keith and awarded a penalty shot. Nylander promptly moved in and made a beautiful move to the backhand on Jeff Glass, beating the journeyman netminder to give Toronto a 3-2 win.

This game was less about Nylander, though, and more about the refigured threesomes up front. Kasperi Kapanen entered the lineup for Toronto, as did Dominic Moore. Both were solid in their roles on the fourth line. Moving down to join them was Leo Komarov, who played the most minutes on the line at 12:27. These lineup changes – something I said needed to happen – allowed the Leafs to roll four lines and receive strong play up and down the lineup, limiting wasted minutes and maximizing their personnel.

Next, it was onto ‘Big D’ to tangle with the Stars on the backend of a back-to-back against a Dallas team that had been rolling. It would not be an easy task.

However, it was the Leafs who came out rolling. Nazem Kadri netted his first of two goals on the night, from about two feet out, late in the first (he added another in the second) to make it 1-0. Early in the second, Zach Hyman would drive to the net and finish off an odd-man rush on a pass from Nylander that he directed past Ben Bishop to make it 2-0. That would be followed by Kadri’s second on the night – a shot from the top of the left face-off circle that went in off Dallas’ Mattias Janmark by a stunned Bishop to put the Leafs up three, and give Kadri three goals in two games after having that many total points in the previous 21 contests.

Dallas would get one back late in period two, and most Leaf fans were probably thinking, “Oh no, not again,” in reference to blown third-period leads rearing their ugly head once again in previous games. But, the next Leafs’ captain would put those worries to bed, as he scored his 22nd of the year to put Toronto up 4-1, a lead they would hold for good, earning them their second straight win.

Is Curtis McElhinney more important to this team than they realize? (Dan Hamilton-USA TODAY Sports)

The biggest story that night, though, was the play of Curtis McElhinney. His role as the Leafs’ backup since his arrival off waivers from Columbus last January has been clearly defined: the starter in the second of back-to-back games. He put together easily his best performance of the year that evening. ‘Mac’ turned aside 39 of 40 shots, including some big saves early, and in the latter half of the second, to keep the Leafs ahead. They didn’t carry the play as much as they had the night prior, but McElhinney’s play made it feel as though they were always in control on the scoreboard – exactly what you need from your backup, especially given the circumstances.

After their second five-day break of the month of January, the Blue & White returned home to host the New York Islanders in the first of another Wednesday-Thursday back-to-back, and two straight games against clubs from the Big Apple.

They didn’t waste any time taking it to the Isles. The Leafs led 2-0 after 20 minutes on goals from Kapanen (his first since his recall and reinsertion into the lineup) and Auston Matthews. More impressive than the lead for the Leafs in the first period, however, was their shots advantage, 13-3. Many people, including McElhinney, were worried another extended break for Toronto would set them back, and see them lose their rhythm, but that was most certainly not the case.

They would pile up another 19 shots in the second (while surrendering 11) and 18 in period 3 (while giving up 14), for an edge of 50-28 in the final shots. Even more noteworthy than the shots were the goal-getters for Toronto. The average age of their goal scorers on the night was 21.6, which includes Justin Holl (26), who, along with Travis Dermott, scored his first NHL goal. In doing so, he became the second defenceman in franchise history to score in his NHL debut (the other was Ron Wilson in 1978). 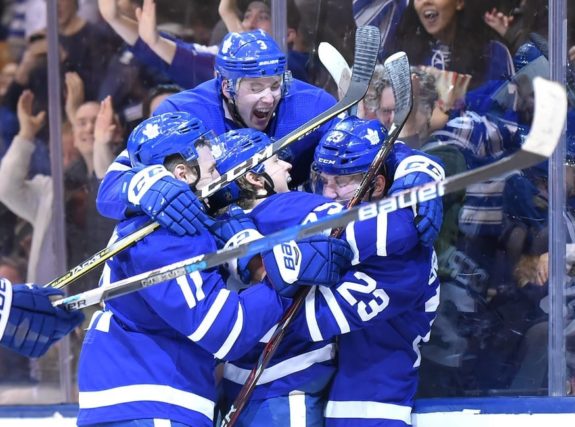 The latest sterling performance from the Buds came Thursday when they battled the other New York-based squad – the Rangers – this time on the road at the World’s Most Famous Arena. Curtis McElhinney was back between the pipes for the second time in three games after only playing once in the previous 16 contests.

The Leafs took it to the Rangers early on and were rewarded for his efforts. Holl took a seeing-eye shot that clanged off the post and in past Henrik Lundqvist. With his second marker in as many games, he became the sixth defenceman in NHL history – and first in Leafs’ history – to notch a goal in each of his first two NHL games. They weren’t done there, as, before the first period was out, James van Riemsdyk would take a pretty feed from Connor Brown and waltz in alone to score his 20th goal of the year, making it 2-0 for the visitors after one.

They would add two more in the second. First, less than a minute into the frame, Patrick Marleau hammered home a fortuitous bounce off a Nazem Kadri shot that hit a leg and went right to the 39-year-old, who made no mistake. Then, less than three minutes later, Hyman took a pass from Nylander, cut to the front of the net and made a sweet move to the backhand, sliding it past ‘The King’ for perhaps the prettiest goal he’ll ever score. That made it 4-0 Leafs and chased Lundqvist from his cage for a second time this year against Toronto (the first coming October 7 at Toronto) and the second game in a row.

The Leafs would do a great job of protecting the lead for the remainder of the game. They played one of their best defensive games of the year – if not their best – relinquishing very few quality scoring chances. The score remained 4-0, giving McElhinney his second shutout of the season (the other was back on Dec. 10 vs. Edmonton, a 1-0 Leafs win) and the Leafs their fourth straight win.

A Prime Example of Winning Hockey

Although the streak ended last night in Boston with a 4-1 loss to the Bruins, it doesn’t take away from what the Leafs did during their win-streak. It was a prime example of how to win games consistently. You’re not going to average four goals a game for an entire season as they did during the four-game run, but their attention to detail defensively and the lockdown mentality – allowing only three goals over the four games – is exactly what is needed to win playoff games.

As last night showed, there is still some work to do, but – and I don’t want to sound cliché here – you aren’t going to play your best all the time. That said, they were a step or two slow against the Bruins, and you won’t win a seven game series playing the way they did against the Bruins.

The Leafs are dealing with injuries to Zaitsev and Matthews. (John E. Sokolowski-USA TODAY Sports)

Monday’s game vs. Anaheim will be an important one for Toronto. Do they bounce back from a game they were vastly outplayed in? Or do they let this loss grow into a two or three game losing streak? The best teams, more often than not, find a way to rebound from a tough loss and not allow it to get to their head. The start of Monday’s game will be crucial. If the Leafs can carry the play – even if they don’t score – early in the game, that will be key. If they come out flat and fall behind by a goal or two early, that could mean trouble.

The Ducks are tied for eighth in the West, but are only five points worse than the Leafs; so, it won’t be easy, but they’ll have their home crowd behind them as they look to pick up their fifth win in six games and sixth in eight against a hungry Ducks’ team looking to halt a three-game skid of their own.