Over the recent history of the NHL, most if not all of the playoff teams bring up a group of AHL players in their system to be the “Black Aces” for the franchise. This practice has been in vogue for some time and it gives these young players an opportunity to experience the playoff atmosphere of the parent team. It also provides the chance to work out in the event of an injury to be ready to step up.

While some of the names of this year’s Aces might be familiar to the Lightning faithful, only the real die-hards will recognize names like Adam Wilcox, Tanner Richard, Matt Peca, and Adam Erne. Sure, there are guys who have been seen in a Tampa Bay Lightning sweater over the past couple of seasons like Luke Witkowski, Slater Koekkoek, Tye McGinn, and Kristers Gudlevskis. There are also names that are more famous than the faces in these parts like former number one draft pick, Anthony DeAngelo, Brayden Point, Joel Vermin, and Dylan Blujus.

Most of these young players will be calling Amalie Arena home in the next two to five years. The fan base will know all their names by then. The 2016 Black Aces for the Tampa Bay Lightning are here in town and are having the experience of their young professional careers.

Obviously, there are practices and team functions around town, some meet and greets, and of course, the Lightning playoff games. These young players have a front row seat to the atmosphere of the NHL playoffs. As the franchise continues to be one of the league’s top echelon teams, young players in their system must develop especially in this salary cap era. 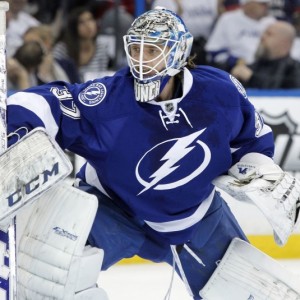 Wilcox and Gudlevskis are the goalies in this group of Aces. Both spent the season in net for the Syracuse Crunch. Gudlevskis was the number one goalie and posted a record of 16-12-2. Wilcox in his first year in the AHL was 9-12-2. Sure Ben Bishop and Andrei Vasilevskiy are probably the best goaltending tandem in the NHL and at 28 and 21 years-old respectively, there isn’t an urgency for either of the two Ace goalies. But it does provide a certain level of confidence knowing the franchise has this much depth at this key position.

The defenders in this bunch are a couple of guys in Koekkoek and Witkoski that have had a couple of cups of coffee here in Tampa over the last couple seasons. Enough for most fans to find what they like about their game. There are also a couple of guys who Lightning fans know more by name than by sight in DeAngelo and Blujus.

The blue line is one area that gives most fans trepidation. Sure, there is Victor Hedman and Anton Stralman as the top defensive pair but after that are a few veterans that work hard, play smart but every once in a while get beat by speed. There are also a couple of young D-men in Tampa that are still learning the game and the four defenders are close to pushing the guys in the NHL sooner rather than later.

All four of these Aces played over 60 games for Syracuse. DeAngelo led this group with 43 points in 69 games. Not bad for the 20-year-old in his first AHL season. He may be ready for the NHL in another year or two but this kid has got the goods to impress. Blujus and Koekkoek are  a couple of up and comers after completing their second year in Syracuse.

Witkowski is the hitter in the group. At 6’3″ and 215 pounds, he is a physical tormentor. Being a right-handed shot increases his value but he won’t speed by anyone. However, if he gets you in his sights it would be a good idea to bite down hard on your mouth guard because he will issue a teeth-rattling hit. Witkowski is the oldest of the Aces and has some NHL experience which could lead to a spot start in these playoffs if one of the Lightning defenders need to heal from a minor injury.

The Black Ace forwards are most of the top scorers from the recently completed Syracuse Crunch season. The exception is Point, the 20-year-old who spent this past season with his junior team, the Moose Jaw Warriors. In 48 games, Point scored 35 goals and 53 assists for 88 total points. It has been a banner year for the young right-handed center as he was named the captain for Team Canada in the 2016 World Junior Championship tourney.

The other forwards include the top Crunch point scorer in Richard along with two others in the top five in Peca and McGinn. The two remaining forwards are Vermin and Erne. These five averaged over 12 goals and over 25 assists this season for the Crunch. This is a group of highly skilled offensive players.

For NHL experience, McGinn is the leader of the pack with 89 games while Vermin has dressed for six games in the show. For the rest of them, this time as part of the Aces is the closest they have been to the life of an NHL player.

In the next season or two, Richard, Erne, Vermin, and McGinn should compete for a Lightning roster spot. Point and Peca certainly have tremendous upside soon.

As more fans become familiar with these younger players in the Lightning organization, one thing is certain is that Steve Yzerman and Al Murray, Director of Scouting have filled the talent pool throughout the organization. As the Aces complete their time with their NHL counterparts throughout these playoffs, they will have the experience of their professional lives.

It is kind of like muscle memory. Athletes repeat certain tasks on the ice thousands of times so when game time comes, their bodies know exactly what to do without thinking. The Black Aces for the Lightning this year are here for the duration of the playoffs so in the next year or two or three, their bodies will know exactly what to do because they have already been here.