In my last two articles I used a Monte Carlo algorithm to make predictions on how the Pacific and Central Division will look at the end of the season. This Monte Carlo is based on data and information we know about teams as they are today. Today we will move on to the Eastern Conference and look at the Atlantic, a fairly top heavy division, and make predictions on the final ranking of all 8 teams within.

As a reminder, the Monte Carlo uses Score-Adjusted Corsi, to model the strengths of each team, research from my thesis, and random numbers to iterate over the remaining schedule over 10,000 times to come up with the probabilities. This information is based on what we know about the teams and major change ups, such as injuries, trades, and a high PDO run, can affect the final results.

Without further ado, let’s look at how the Atlantic Division is likely to fair. 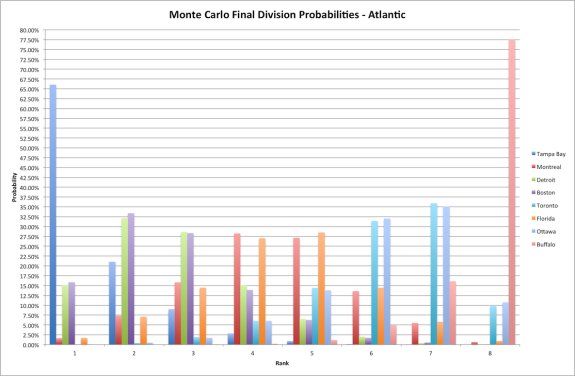 The Tampa Bay Lightning have started off the 2014-2015 season by being the clear-cut best Eastern Team; by Score-Adjusted Corsi (SAC) they are controlling 53.9% of possession. The Lightning are currently sitting at first in the Eastern Conference with 36 points in 25 games played which is a result of above-average shooting and save percentages and a 101.5% PDO. Barring major disasters to their rosters the Lightning have by far the best probability of finishing 1st in the division.

Montreal Canadiens have been a team of smoke and mirrors this season. They might be sitting at second in the division currently with 36 points in 26 games; they have been doing that on the backs of excellent goaltending. Their possession numbers are 6th worst in the league, at 25th they are a 48.9% possession team. Given their early season success it should carry the Canadiens into the playoffs but expect them to drop to 4th in the standings.

Only a few months ago people were thinking that Detroit was no more and that they are going to end their 20+ year playoff streak as they were old, injured and crawling into the last playoff spots. Much like Red Wings fashion they have replenished their talent on the fly and are the 7th best possession team at 53.2%. It’s unlikely to see the Red Wings jump past the Lightning but they are most likely in the fight for the next two spots with them having a higher probability of finishing third.

The Boston Bruins have taken a step back from the elite team they were, which you can’t be too upset about when you have won a Stanley Cup. This year the Bruins are the 8th best possession team at 53.1% and are sitting in 4th place in the division with 29 points in 25 games. Boston will also be most likely fighting for the second and third rankings with Detroit with the Bruins having the upper hand in finishing in second place.

The Toronto Maple Leafs are currently sitting at 5th in the division with 27 points in 23 games, this is the good news. The bad news is that Toronto is still the 4th worst team by possession rankings, at 45.9% and has gotten to this division ranking due to above average shooting and save percentages which will not likely continue. Give the other teams in the division are statistically better than them it is most probable the Maple Leafs will fall to 7th in the division, but could be fighting for sixth with the cap-floor Senators.

Florida is quietly in 6th place in the division having earned 24 points in 22 games but they are the 19th best team by SAC at 50.1%. The recent injury to Roberto Luongo could hurt them in the long term; however, it is currently most probable the Panthers will be able to jump a spot in the rankings and finish 5th. Given how weak the Metro Division is, at best it would not be out of the realm of possibility to see the Panthers finish with the second wildcard position.

In the NHL you don’t need to spend to the cap to win, but you do need to be spending. The Ottawa Senators continue to be an experiment in seeing how little a team can pay for an NHL roster. By SAC the Senators are the 24th best team in the league at 47.1% which has placed them at 7th in the division with 24 points in 23 games. Forecasting ahead 59 games it would be a surprise to see Ottawa move much the rankings in either direction but they should be in the fight for 6th place with the Toronto Maple Leafs.