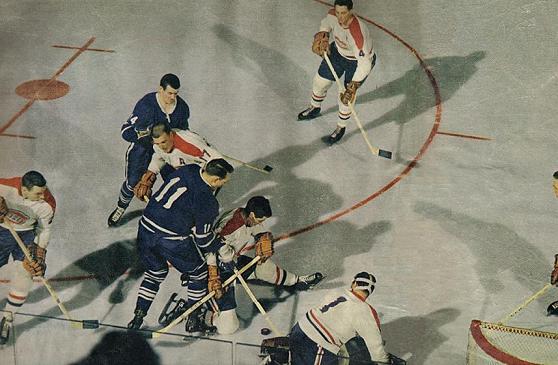 Le bleu-blanc-rouge vs. the Buds; the Habs vs. the Leafs; French vs. English; Quebec vs. Ontario.

However you put it, the rivalry between the Montreal Canadiens and Toronto Maple Leafs is one that’s purely Canadian.

For over 70 years these two teams have battled for the hearts and minds of Canadian hockey fans. It’s the NHL’s oldest rivalry and cuts right through what makes Canada, well… Canada. It’s so much more than which hockey team is better or even which city is better. Because this rivalry can be traced back all the way to the Plains of Abraham in Quebec, where the English army led by General Wolfe defeated the French led  charges of General Montcalm. Both died in action. It was fitting. Unfortunately history failed to record the final score.

I think it’s safe to say though that James Reimer did not get a shutout.

But seriously, there can be no mistaking it: in the days of the Original Six if you were a hockey fan in Canada, you were either a Habs or a Leafs fan. There was no in-between. And believe it or not, the Leafs once had the advantage over the Habs where championships were concerned. And you may be surprised that no matter the apparent dominance the Canadiens have had over the Leafs, their playoff series record is 8-7. Pretty even eh?

A Cup in Colour?

It’s pretty well known the Leafs haven’t won the Stanley Cup since 1967 which is — interestingly enough — the last time they defeated the Canadiens in a playoff series. The running joke is, the Leafs haven’t won a Cup in colour. They hold the longest championship drought in the NHL. And they haven’t made the playoffs since 2004.

Which is why they probably won’t end up facing each other in this year’s playoffs.

Could history repeat itself? For starters both teams need to make the playoffs at the same time. The Habs are coming off one of their worst seasons in franchise history where they finished 15th in the East.

The Leafs? They haven’t played playoff hockey since Jeremy Roenick scored in OT to send them packing back in 2004. And we all know (or you should know) about Toronto’s practically-epic slide of last year.

But in this sideshow lockout of a year, it looks like things are finally going to change.

As I write this, the Canadiens sit 2nd in the Eastern Conference after clinching a playoff spot with a 5-1 win over the Buffalo Sabres. They can still theoretically finish at the top of the conference, but it looks more like they will finish 2nd or 4th given the NHL’s current playoff structure which reserves the top three conference spots for the division leaders.

And the Maple Leafs have practically entrenched themselves in the 5th spot, barring a truly epic collapse on their part (which is of course still likely possible).

So, if the Canadiens can hold off the Bruins and win the Northeast Division, they will finish 2nd and face the 7th seed. Could be Ottawa, could be the Rangers, could even be the Islanders. But if the Bruins win the division, it sets up a Habs/Leafs showdown in the opening round.

And this was indeed the state of affairs when the Canadiens lost earlier this week against the Washington Capitals.

And that’s when things got a bit weird.

Something Funny Happened on the Way to the Bell Centre

The day after the Habs loss to Ovechkin’s Capitals this week I noticed something funny happening. Funny to me at least. Canadiens fans were all of a sudden worried that Montreal might face Toronto in the opening round of the playoffs!! And that maybe the Leafs would win!

Then be happy I’m here to soothe your rattled nerves Habs fans because let me tell you something right here and right now. Come a little bit closer, I don’t want to yell:

You have nothing to worry about. Okay? Everything is going to be alright.

For all intent and purpose, the Canadiens should win their opening round, no matter who they face. That’s the way things are supposed to happen. It’s not the way it always happens mind you but on paper, the team that finishes higher in the regular season should beat the team below them.

But that’s not the way it always happens. Teams match up better against some teams over others. Now there’s parity in the NHL where any team can beat another team on any given night. And it applies in the playoffs too. Canadiens fans know that. With all of their playoff surprises (usually in the Habs’ favour), upsets do happen.

I’m sure you all remember the 2010 playoffs which saw the upstart Habs knock off the Capitals and the Penguins. That was fun.

The Regular Season Means Nothing in the Playoffs

The Canadiens and Maple Leafs have been two of the more pleasant surprises this season. The Canadiens as a team have proven they were not as bad as their record last year and have also shown their strong early start was not a fluke. They’ve been able to maintain their strong pace throughout the entire lockout-shortened season. And how about this? The Habs’ 26 wins through 40 games are the most they’ve had since the 1978-79 season where they got off to a 27-8-5 start. And of course, they won the Stanley Cup that year. That’s the year they beat the Leafs.

For their part, the Leafs against all odds (concussions, broken arms and the fear of choking included) have stood tall and improved in many facets of the game that held them back for years — namely the penalty kill and defensive-zone play. Netminder James Reimer, though his numbers don’t tell the real story, has provided enough puck-stoppage at the right times to allow the Leafs to maintain their pace, even on nights where they haven’t been very good.

Look, hockey and sports in general can be won or lost with the mental game. Momentum swings can make or break a team. If you’ve got it, everything just flows. If you don’t, it’s like you can never get out of neutral. Confidence is the key to success. And both the Habs and the Leafs have it this year. You need to believe.

So far this season the Maple Leafs have the edge over the Canadiens, taking two games out of three with two more games remaining. But let’s break it down. The Leafs beat the Canadiens in Montreal to open the season 2-1. The Leafs played good enough to win, but from a Montreal perspective, the Canadiens did not show their true stuff. And it was the opening game after a long-winded lockout. Anything and everything was possible. So in the end, you can’t make much out of that game.

In the second matchup — also in Montreal — the Leafs had the Canadiens by the you-know-whats.  Then they got a bit cocky and made a big mistake.

Habs Now Have a Hate for the Leafs

In that second game, the Canadiens were embarrassed by the Leafs in a 6-0 loss. It was ugly. It was sad. It was demoralizing. But something very important happened. The Leafs — and I blame head coach Randy Carlyle — made a major strategic error. They not only beat up the Canadiens on the scoreboard – they beat them up on the ice as well. Which is fine; but by putting out their heavies late in the game, Carlyle gave Montreal a rallying cry. He awoke the beast.

It was often said about Hall of Fame defenseman Larry Robinson that it was best to leave the guy alone. Don’t wake him up. Just let him be. Because if you do wake him up and even worse, get him mad — he’s going to burn you. Burn you bad.

You see, although the Canadiens have the edge in their all-time series, the Leafs (in the regular season) have had the edge over Montreal since the two found themselves back in the same division in 1998-99. Now I don’t have the stats to prove it and I don’t believe it to be a major advantage but the perception is the Leafs give the Canadiens trouble. No matter how bad the Buds are.

The rivalry from a Canadiens perspective hasn’t been much of a rivalry since the sixties. For the Leafs, a game against the Habs is always one to get up for, just like it is for Montreal when they play the Bruins. Or the way it used to be against the Nordiques.

You see where I’m going with this? The 6-0 rout, the beatings, the Grabovski bite late when the game was out of reach — it all provided the Canadiens something to rally around now when facing the Leafs. The Canadiens found their hate for the Leafs. And so, the last time they faced each other this season back in February, Montreal soundly defeated Toronto 5-2.

But it all really means nothing. What really matters is that this historic rivalry is now officially back on. It’s always been on for the Leafs. But now it’s on for the Canadiens. And that’s not good for Toronto.

Tonight’s game in LeafLand has major playoff implications. For the Canadiens, a win allows them to keep ahead of the Bruins in the Northeast. For the Leafs, a win will give them that much more mojo going into the playoffs, especially if they face Montreal. But so long as Montreal plays its game, they’ll beat the Leafs in whatever round they should face them. It’s be tough. It’ll be exciting. It’ll be fun!!

So don’t worry Habs fans. I know, I know, there could be nothing worse than the shame that would entail from a defeat at the hands of the Leafs in the playoffs.

I just don’t believe that’s going to happen. So why all the worry?

Find me on Twitter where I can be quite entertaining. Handsome too: @HabsFanLeafLand