For a franchise with nearly five decades of history, the Calgary Flames have been very selective when celebrating it. Heading into the 2018-19 campaign, the club had retired only two jersey numbers and honoured two others – a surprisingly low figure given the number of Hockey Hall of Fame inductees that have worn the Flaming C over the years. 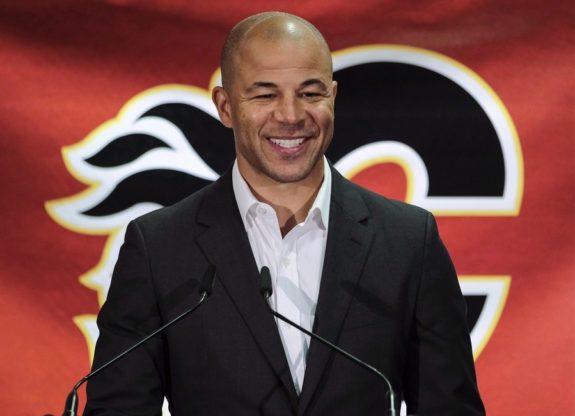 Jarome Iginla’s #12 jersey was retired by the Calgary Flames on March 2, 2019. (THE CANADIAN PRESS/Jeff McIntosh)

On Saturday, March 2, the Flames added another piece of history to their franchise when they retired Jarome Iginla’s #12 in front of a sold-out Scotiabank Saddledome crowd. By matter of circumstance, it was the perfect time and manner to celebrate the career of the most important player in their history.

The Right Prospect at the Right Time

Iginla joined the Flames under rather auspicious circumstances in December 1995. With star center Joe Nieuwendyk, their former captain and all-time leading scorer at the time, sitting out due to a contract dispute, the Flames had slid down the standings. The decision was made to resolve the dispute by flipping the future Hall of Famer for younger assets.

In a more macro sense, the crashing Canadian dollar had made it difficult for the Flames to battle dollar-for-dollar with their deep-pocketed American competitors. The Nieuwendyk swap came during a period of time where the Flames sold off several key pieces of their 1989 Stanley Cup team: Doug Gilmour became a Maple Leaf in 1992, Al MacInnis, Gary Suter and Mike Vernon were traded in 1994, and Joel Otto left as a free agent in 1995. The process would continue during the franchise’s “Young Guns” years, with Gary Roberts departing in 1997 and Theo Fleury in 1999, before some changes to the league’s financial structure gave the club some stability.

The Flames had many promising young pieces during the ’90s and early ’00s, but few turned that potential into on-ice results. Grabbing Iginla from the Stars – instead of the rumoured option of Todd Harvey – was a twist of fate that allowed the club to find a silver lining in Nieuwendyk’s departure. By an odd coincidence, the same thing happened a decade prior when the team sent star Kent Nilsson to Minnesota and used one of the draft picks they received to select Nieuwendyk.

The Right Superstar at the Right Time

While the club’s other Young Guns faltered during a tumultuous ’90s for the club, Iginla managed to adapt and find ways to contribute to keep the Flames competitive. He consistently could be relied upon for around 20 goals and 50 points through his first five seasons with the Flames, which was usually enough to put him in the running for the team’s scoring lead. But eventually his game would find an even higher gear, and he would be instrumental in the team’s very survival in their market.

Off the ice, things like the NHL’s currency equalization program and the salary cap instituted after the lost 2004-05 season slowed the financial bleeding for small market clubs like the Flames. But there wasn’t much excitement for the Flames at the ticket booth following roughly a decade of mediocrity. Iginla’s offensive eruption in the 2001-02 season, combined with his key role in the 2002 Olympic gold medal win for Team Canada, created some buzz around the Flames. That buzz turned into a frenzy during a 2003-04 season that saw the Flames improbably march to within one win of a Stanley Cup. The playoff run was a team effort, but Iginla was the player that the market rallied around.

Iginla paying special tribute to three of his longest-serving teammates: Robyn Regehr, Miikka Kiprusoff and Craig Conroy. When Iginla mentioned how Kiprusoff led them to within a win of the 2004 Stanley Cup championship, the crowd responded: "It was in. It was in." #NeverForget

As Iginla became established as the best player in the NHL at his position, or at least in the mix for that distinction, the Flames became the hot ticket in Calgary. Sellouts were a regular occurrence for the first time in years and the ownership was seeing strong cash-flows due to the fan frenzy. The Flames were able to spend to the salary cap and sustain themselves as a competitive market in the NHL – “Save the Flames” ticket drives were a distant memory. Without Iginla, or with a lesser version of him, the Flames don’t have nearly that level of success and could have potentially been in peril.

A Fitting End to a Magnificent Career

It’s often stated that time is nobody’s friend. Things happen when they happen. For the Flames, Iginla was the precise right player to acquire at the right time, and he happened to level up from being merely good into a superstar at the exact time the franchise really needed him to.

At the same time, Iginla’s retirement happened to coincide with the Flames’ best on-ice season in 30 years. The ceremony to commemorate #12’s career came with the Flames sitting atop the Western Conference standings, and in front of a crowd and team in the mood to give his career the fanfare it deserved. The hour-long celebration struck precisely the right notes and sent Iginla’s banner to the rafters in style.

The celebrations likely aren’t over. As he played his last NHL game in 2017, Iginla will be eligible for induction into the Hockey Hall of Fame in 2020. Given the nature of his contributions to the game, he seems like a shoo-in on the first ballot.