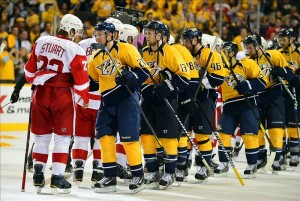 For the second straight season the Nashville Predators have made it to round 2, as they are set to take on the Phoenix Coyotes in the Western Conference Semifinals after ousting the Detroit Red Wings in round 1.

The match up with the Coyotes is expected to be a goaltending battle for the ages.  Vezina Trophy nominee Pekka Rinne lead the Preds through round 1 with stellar numbers, and emerging star goaltender Mike Smith did the same for Phoenix.  Both teams are built on defense and goaltending, which is sets this up as an interesting series.

The Coyotes knocked off the Chicago Blackhawks in six games in round one, and were led by Antoine Vermette as he tallied 4 goals and 5 points. Vermette played in all 82 games for Phoenix during the regular season, scoring 11 goals and adding 26 assists for a total of 37 points.  The native of St. Agapit, Qubec has 600+ games of NHL experience with the Ottawa Senators, the Columbus Jackets, and the Phoenix Coyotes, and was part of the Senators run to the Cup Finals back in 2007. 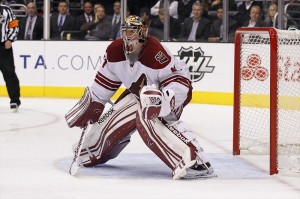 This off-season, the Coyotes lost goaltender Ilya Bryzgalov to free agency, and were in need of a replacement.  Coyotes General Manager Don Maloney decided to take a chance on Mike Smith,and it has paid off big for Phoenix.   Smith had spent the majority of his NHL career as a back-up with the Dallas Stars and Tampa Bay Lightning.  This season the Kingston, Ontario native proved he is a capable starter, leading the Coyotes to the Pacific Division title while going 38-18-10 and compiling a 2.21 goals against average and .930 save percentage.

During the regular season, the Preds were 3-1 against the Coyotes.  Heading into the series, Nashville needs to do a better job of converting on their power play opportunities and try not to rely on Rinne as much.  One thing is certain, this is shaping up to be an entertaining series.
http://espn.go.com/nhl/playoffs/2012/story/_/id/7851726/phoenix-coyotes-versus-nashville-predators
http://www.hockeydb.com/ihdb/stats/pdisplay.php?pid=50142
http://coyotes.nhl.com/club/player.htm?id=8468535