True to form, there are quite a few attractive NCHC matchups this season. 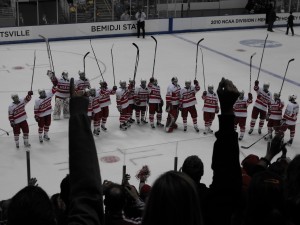 This will be the second season in a row that the Friars have opened their season against an NCHC team. Last season, UND beat and tied the Friars at Engelstad Arena.

Last season, the Bulldogs got the last laugh as they ended the Gophers season (4-1 W) at the NCAA Northeast Regional Championship in Manchester, New Hampshire. The Bulldogs return a majority of their core players from last season and should be one of the top teams in the NCHC again this season.

Since 2010-11, the University of Minnesota-Duluth and Notre Dame have played in eight games. UMD holds the edge 5-3-0 and has won the last two games in the series.

Last season, the NCHC and Hockey East were the dominant conferences in Division I college hockey. While the NCHC had the best non-conference record in the regular season. In the postseason, Hockey East claimed the ultimate prize, the NCAA National Title.

Finally, there will be a lot of college hockey fans paying attention to these important non-conference games. These games will have national implication in the Pairwise Rankings.