NASHVILLE — Jesper Fast scored two goals, including the game winner, and added an assist as the New York Rangers snapped a three-game losing streak with a 4-3 win over the Nashville Predators on Saturday night.

Chris Kreider had a goal and an assist, Marc Stall added a score and Mika Zibanejad had a career-high four assists for the Rangers, who earned their first road win in regulation this season. Henrik Lundqvist made 34 saves.

Nick Bonino scored a pair of power-play goals and Kevin Fiala also scored and had two assists for the Predators, who have lost six straight. Pekka Rinne made 18 saves.

The Rangers were trailing 3-2 entering the third, but Staal and Fast scored in just over a three-minute span early in the period, giving New York the lead. 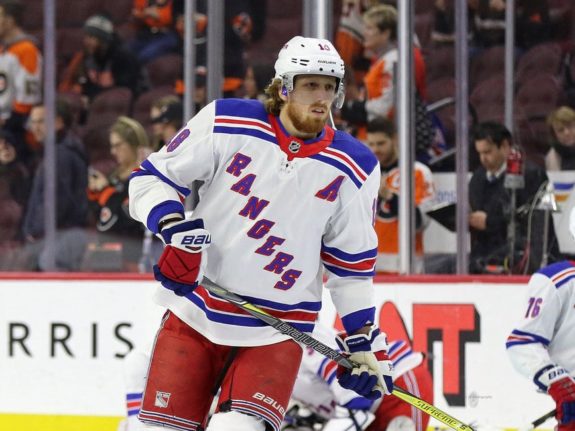 Lundqvist stopped a one-timer off the stick of Nashville captain Roman Josi with 23.2 remaining in the game to preserve the win.

Kreider scored the game’s first goal at 2:42 of the opening period on a power play.

Above the right circle, Zibanejad faked a slap shot and then sent a pass to Kreider, who was just above the goal line to Rinne’s right, where he was able to deflect the puck over the shoulder of the Finnish keeper.

Kreider’s 20 goals lead the Rangers. He has scored in four consecutive games and five of his last six.

From the left faceoff dot, Fiala sent a pass to Mattias Ekholm at the middle of the blue line. There, the Swedish defenceman sent a one-timer toward the Rangers net and Bonino was there to redirect the shot past Lundqvist.

New York made it 2-1 at 3:51 of the second. From behind the Nashville net, Zibanejad sent a pass to Fast, who was alone in the slot. He beat Rinne with a quick shot on the blocker side.

Fiala tied the game again at 4:44 of the second with an unassisted goal.

Driving down the right side on a 2-on-1, Fiala snapped a wrist shot low to Lundqvist’s far side.

Bonino’s second power-play goal of the game gave Nashville its first lead at 10:35 of the second after converting a rebound of his own shot at 10:35.

NOTES: Nashville C Kyle Turris missed the game with a lower-body injury. …The Predators sold out all 51 home games they played at Bridgestone Arena in calendar year 2018. … Rangers RW Kevin Hayes picked up one assist, extending his career-long point scoring streak to nine games. … New York is 9-6-6 when scoring first this season.