With a month remaining before training camps around the NHL open, fans of every team should be excited about the start of a new season. Instead, they are watching the ongoing negotiations between the NHL and NHLPA regarding a new collective bargaining agreement, wondering if as well as when the 2012-13 season will begin.

The current CBA expires on September 15th.   In spite of negotiations that have taken place throughout the off-season and the meetings that have dragged on for the  better part of the last month, there are still a number of differences that remain unresolved.

Both sides have reported there is common ground on some issues, but there is still a meaningful gap when it comes to the core economics of the league. According to Donald Fehr, the executive director of the NHLPA, the reason for the gap is the owners’ initial proposal to the union.

“There is a pretty substantial monetary gulf,” Fehr said to a group of reporters in Toronto on Wednesday. “When you start with the proposal the owners made, how could it be otherwise?”

In their initial proposal, presented on July 13th, the owners wanted to cut the players’ percentage of hockey related revenue from 57 percent to 46. This reduction would have cost the players $450 million, and financed all of the league’s revenue sharing.

On Tuesday, the NHLPA offered its alternative proposal to the NHL’s initial offer. According to Fehr, the union is willing to make a concession on hockey related revenue, a move that he estimates could cost the players $465 million over a three-year period, if the league’s growth is the same as it was since 2005-06.

Despite the concession, Fehr does believe that in the long run, the union’s proposal will benefit the league.

“We do believe the proposal the players made, once implemented, can produce a stable industry that going forward can give us a chance to move beyond the recurring labor strife that has plagued the NHL,” Fehr said on Tuesday.

NHL Commissioner Gary Bettman doesn’t have the same assessment that Fehr does about the union’s proposal:

“It (the union’s proposal) wasn’t particularly responsive to our proposal,” Bettman said. “We value the union proposal and what it means in terms of its economics differently than the Player’s Association does.”

With Fehr scheduled to make trips to brief the membership, he and Bettman won’t return to the negotiation table until Wednesday in Toronto, although they do plan to communicate in the interim. 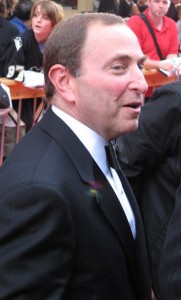 Bettman made it clear last week at the NHL offices in New York that there will be a lockout if no agreement is reached before September 15th,

“The owners are not prepared to operate under this collective bargaining agreement for another season,” Bettman said on August 9th.

Fehr has maintained that the players don’t view the expiration date of the CBA in the same way that the owners do:

“There’s only one party that’s talking about September 15th. Players haven’t threatened a job action; it hasn’t even been discussed. We don’t want to have to discuss it; hopefully we won’t.”

At this point, NHL fans around the world can only hope that the two sides can get a deal done in the next month.