With only about 72 hours before the February 27 NHL trade deadline, rumors are swirling all over the Internet, and especially on Twitter, as fake insiders try to get the attention of hockey fans by spreading out false trade rumors. I will try to dissect some of the hottest rumors around and tell you which players are most likely available.

Yesterday the first major traded happened when the Columbus Blue Jackets traded disgruntled center Jeff Carter to the goal-starving Los Angeles Kings in exchange for blue liner Jack Johnson and a 1st round draft pick in 2012 or 2013.

With their recent playoff push, the Anaheim Ducks are only looking to trade impending UFAs Jason Blake and Niklas Hagman, albeit they are not drawing much interest because of their lack of production and their high salary. The Ducks might trade veteran rearguard Tony Lydman who has drawn interest from the Chicago Blackhawks. Teemu Selanne, Bobby Ryan, Corey Perry and Ryan Getzlaf are not going anywhere.

With the uncertainty surrounding Nathan Horton (concussion-like symptoms) and the knee injury that will sideline Rich Peverley for four to six weeks, the Boston Bruins will like add a depth forward to an already potent forward group. Tim Thomas and Tuuka Rask are not going to be traded.

The Buffalo Sabres are actively trying to move Derek Roy and Brad Boyes. Pending UFA Paul Gaustad is drawing a lot of interest among the NHL as the Pittsburgh Penguins and the Vancouver Canucks are interested in his services. Overpaid veteran Jochen Hecht is off the market after he sustained his third concussion in a span of three months. The Sabres will not trade Ryan Miller during the season, but they might feel the trade market this summer.

Back in the thick of the playoff race, and following the acquisition of Mike Cammalleri and the departure of Brendan Morrison, the Calgary Flames will most likely be pretty quiet and add a depth forward in the next 72 hours as they will rather wait for their injured players to come back. Curtis Glencross who missed five weeks due to a knee injury made his return yesterday, giving the Flames an extra boost. All-Star winger Jarome Iginla will not be traded.

After re-signing rearguard Tim Gleason and forward Tuomo Ruutu to long-term contract extensions (boy did they overpay!), and trading forward Alexei Ponikarovky to the New Jersey Devils, the Carolina Hurricanes don’t have much to offer other than blue liners Bryan Allen and Jaroslav Spacek. Spacek is drawing interest from the New Jersey Devils, the Chicago Blackhawks and the San Jose Sharks, among others.

The Chicago Blackhawks are looking to trade for a 2nd line center to round out their top-6 and have interest in Derek Roy and Pierre-Alexandre Parenteau, as both players are extremely gifted players that would fit very well in the team’s up-tempo system. The Hawks are also looking to bolster their blue line with a veteran defenseman such as the Ducks Tony Lydman or the Canes Bryan Allen. The Hawks would also like to add a veteran goalie to the mix, but other than Nikolai Khabibulin, they are scarce this season as Evgeny Nabokov is reportedly off the market.

The Colorado Avalanche are desperately trying tu unload Paul Stastny‘s hefty contract of $6,600,000/year, but they are not finding any takers. The team is also dangling winger David Jones and gritty forward Daniel Winnik. The latter is drawing a lot of interest because of his affordable $950,000 contract. Impending UFA Shane O’Brien is also a good option for teams looking for a gritty and physical defenseman to round out their top six. 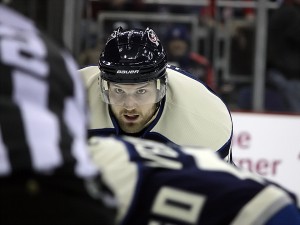 Will the face of the franchise, Rick Nash, be moved? (Dave Gainer/THW)

The Columbus Blue Jackets began their house clearing earlier this week when they unloaded underperforming center Antoine Vermette to the Phoenix Coyotes in exchange for a pair of draft picks. Then, yesterday they traded disgruntled sniper Jeff Carter to the Los Angeles Kings for defensive stud Jack Johnson and a 1st rounder. What about Rick Nash? While Nash is drawing interest from the New York Rangers, the Toronto Maple Leafs and the San Jose Sharks, I highly doubt the star winger will be traded before the deadline since the price is quite high now. He will most likely go at draft in June. As for pivot Derrick Brassard, he is not on the trade market anymore after recording ten points in his last ten games, but the Tampa Bay Lightning and the Montreal Canadiens have been sniffing around. The Blue Jackets are also trying to unload impending UFAs Samuel Pahlsson and Kristian  Huselius.

The Dallas Stars, who are in the thick of the playoff race, are likely to stand pat and only make minor moves such as unloaded pending UFAs Radek Dvorak and Adam Burish. The team already traded defenseman Nicklas Grossman last to the Philadelphia Flyers in exchange for two draft picks. However, the player who’s garnering the most interest is Steve Ott as the Vancouver Canucks, the Phidelphia Flyers and the Toronto Maple Leafs are kicking tires to acquire him.

The Detroit Red Wings already made their biggest move when they traded a 1st round pick to acquire blue liner Kyle Quincey from the Colorado Avalanche via the Tampa Bay Lightning. The team won’t make another big move, but will most certainly add a depth forward such as Daniel Winnik and Mike Knuble. The Wings could also trade Jiri Hudler, an impending UFA, who’s been on the trade market for the past two years.

Look for the next two editions of the Rumors Galore: trade deadline to be published in the next 48 hours.