NHL Commissioner Gary Bettman delivered his traditional ‘State of the League’ address prior to Game 1 of the Stanley Cup Final at the Prudential Center on Wednesday night.

During his prepared initial comments, Commissioner Bettman revealed that the league expects revenues from the 2011-12 season to be approximately $3.3 billion.  That figure means the salary cap could reach as high as $73.8 million in the offseason — nearly $10 million more than last year’s cap of $64.3m.

A salary cap of $73.8m would be 90-percent above the initial $39m cap ceiling instituted seven seasons ago: 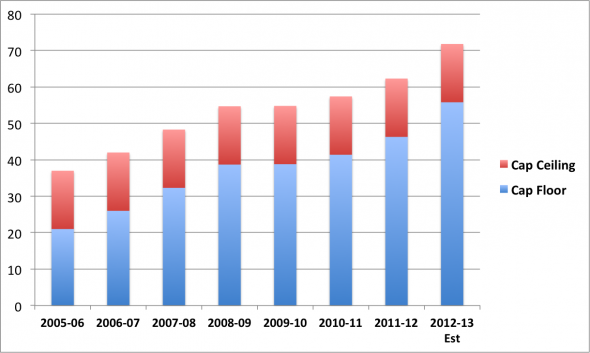 But it’s the estimated salary cap floor of $57.8m — now well above the initial ceiling in ’05-06 — that could prove problematic. Ownership groups from a number of smaller-market teams have complained in recent years that franchise revenue hasn’t matched the rapid rise in payroll demands.

The salary cap rise could be a temporary one, however, as Bettman also revealed the owners and players association are set to open negotiations on a new Collective Bargaining Agreement.  The owners recently notified the NHLPA that they do not wish to extend the current agreement (set to expire September 15, 2012).  Neither side has revealed what changes they plan to push for in the new agreement.

*Update: James Mirtle of the Globe and Mail reports that the salary cap will be temporarily set at $70.3 million, but that number is subject to change for the reasons mentioned above*