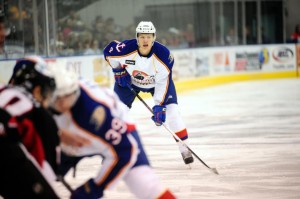 The trials and tribulations of a hockey season in the AHL can be compared to that of a roller coaster—big drops, peaks and valleys, and loops. The Norfolk Admirals, the AHL affiliate of the Anaheim Ducks, have seen a whirlwind season with big drops and huge peaks.

Norfolk ended its recent road trip skating away with seven out of eight possible points this weekend while playing three games in three nights. In the AHL three in threes are normal, but it can play tricks with an athlete’s mind. There is a saying that players use “don’t let the lows, get to low and don’t let the highs, get too high.”

With the recent victories, you can consider this a high point in the Admirals season. Norfolk currently sits in thirteenth place in the Eastern Conference with 48 points. On the flip side, they are in last place in the division. The fourth place team in the East Division is the Washington Capitals AHL affiliate, the Hershey Bears. The baby Caps have 55 points and hold the last playoff spot in the East.

Norfolk ranks twenty-third on the power play. The Ducklings are successful 14.5 percent of the time with the extra skater. Their penalty kill tells a different story. The club ranks twelfth out of all thirty teams with an 84.5 percentage.

The teams home record shows that the club likes playing at home sitting a little past the .500 mark, winning .560 of the time in front of the hometown crowd. While visiting other club’s rinks, Norfolk’s record reads 9 wins and 14 losses.

It’s a fact of life in the AHL, that players who prove themselves may get a shot to showcase their talents with the “big club”. Patrick Maroon is a prime example of hard work and determination paying big dividends. Ranking second on the team in scoring with 30 points, Maroon was recalled by Anaheim and has seen action in three games with the “big boys”. Maroon recently tallied his first NHL goal against the Nashville Predators. Maroon’s first NHL goal was a game tying tally. Maroon lit the lamp in front of his family and friends.

Another mention is Ducks goalie Viktor Fasth. The over-age rookie was signed to a one-year deal in late May. The Ducks thought that a stint in the AHL would pay off for the 30-year-old. Did it ever after three games with Norfolk! Fasth proved to be Anaheim’s bread and butter. Fasth is currently riding a 4 game win streak and was recently named second Star of the Week by the National League.

Norfolk looks to build on the performance they had this weekend.  The red hot Providence Bruins invade Scope arena hoping to collect two wins in the back to back contests. Norfolk has other plans.  They want to escape the bear’s den with two wins and add on to that .560 home record.

Projecting Oliver Kylington’s Next Contract With the Flames