UNIONDALE, N.Y. — Mathew Barzal scored on a power play in the third period and had the only goal in the shootout to lift the New York Islanders to a 4-3 win over the Red Wings on Saturday night.

Anthony Beauvillier and Casey Cizikas also scored in regulation for the Islanders, who beat the Red Wings for the fourth straight time — including a 3-2 win at Detroit last Saturday. Thomas Greiss finished with 18 saves.

Thomas Vanek had a goal and two assists, and Gustav Nyquist and Trevor Daley also scored for Detroit, which has lost six of its last eight and nine of the last 13. Jonathan Bernier stopped 45 shots through overtime.

Cizikas and Barzal scored less than three minutes apart in the third to give the Islanders a 3-2 lead with 6:04 remaining. However, with Bernier pulled for an extra skater, Vanek scored against his former team to tie the score with 1:03 left.

The Islanders outshot the Red Wings 46-15 in regulation, before Detroit had a 6-2 advantage in overtime.

The Islanders were coming off a 3-2 loss to Vegas on Wednesday in Brooklyn. They have won two of their three games back at Nassau Coliseum, where they will play of the majority of their remaining home games this season.

Barzal tied the contest with a power-play goal with 8:57 left in on the Islanders’ sixth man advantage of the game. It was Barzal’s fourth goal of the season and his first since Nov. 23. 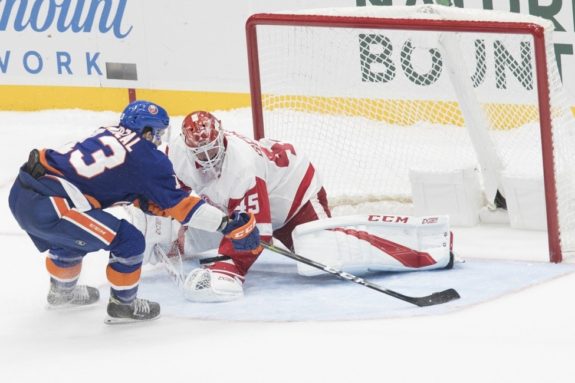 Cizikas shot the puck past Bernier 2:53 later for his eighth of the season.

Nyquist opened the scoring for the Red Wings at 5:03 of the first with his ninth of the season. Dylan Larkin had an assist on the play, extending his point streak to seven games.

Beauvillier tied it with 8:55 left with his 10th. He has scored in three straight games, and in each of the three games at the Coliseum.

Detroit went ahead 2-1 with 14 seconds remaining in the opening period as Daley scored when the puck just barely crossed the line behind Greiss. The goal was Daley’s second of the season. The goal also represented the 300th career point for the 35-year-old defenceman who spent the majority of his career with Dallas and also won Stanley Cups with Pittsburgh in 2016 and 2017. Daley is also four games from 1,000 in his NHL career.

The Islanders outshot the Red Wings 10-5 in the first and 15-6 in the second and kept the barrage going the in the third.

The game also marked return to Nassau for Frans Nielsen, who played 606 games for the Islanders before joining Detroit as a free agent in 2016.

Islanders: At Colorado on Monday night.