By now, the Boston Bruins should be used to this.

Tim Thomas. Andrew Ference. Shawn Thornton. Johnny Boychuk. Each returned to Boston with a different jersey, but came back to an acknowledgment of the time they spent as a Bruin. It’s a symptom of past success; a stiff reminder of the way things were.

There was a tribute for each—usually in between whistles during a TV timeout—and a standing ovation, followed by a polite nod or stick raise from the player. It’s all pomp and circumstance, yet a deserved chance for the players and fans to relive the past, distracting themselves for enough time to sift into the depths of nostalgia.

And then, Milan Lucic returned.

In the beginning with Boston, Lucic became a sort of urban legend. When he joined the team in an otherwise forgettable, 2006-07 season, he was a spark. He was the closest comparable to Cam Neely that the team had seen since the number 8 was raised to the rafters. He could shoot, fight, and change the pace of the game with a hit or a timely goal. Later, he was a big part of the turning of the tide in Boston that led to the Bruins’ 2011 Stanley Cup championship.

But that’s the thing about urban legends—they never end up quite like what you once thought them to be.

Before Tuesday’s game, Lucic wrote a poignant editorial for The Players Tribute on returning to Boston. He referenced the $10 student nights at the TD Garden in 2008, the team’s 3-0 collapse in 2010 against the Philadelphia Flyers leading to a Cup win, and his final few days as a Bruin. Lucic was one of those rare athletes who was totally self-aware of his own surroundings and the impact his and his team’s success had on those around him. He got it.

The fans did, too.

In his return to the TD Garden on Tuesday, Lucic received a roar of an ovation no less than five times before the game had even begun. He was easily one of the most popular Bruins in the last ten years not named Patrice Bergeron. Once the tribute started, it was hard to even hear the background music accompanying highlights of Lucic in a Bruins’ jersey. 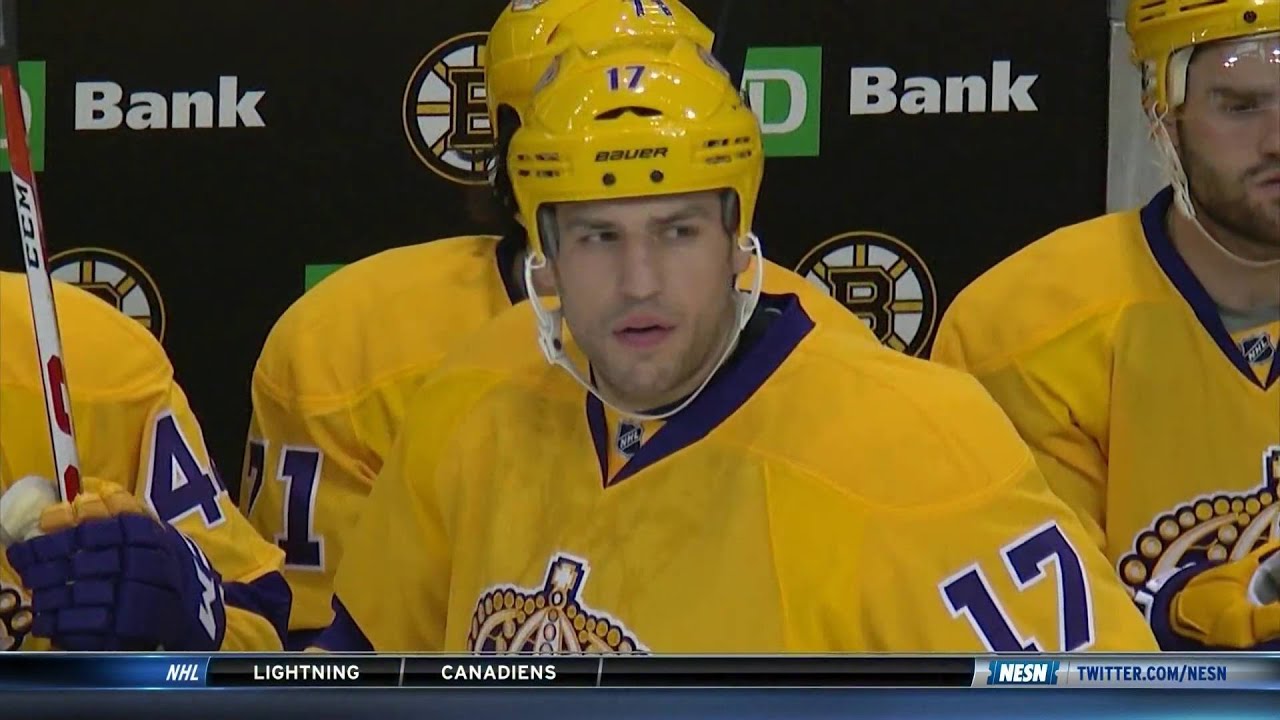 “It was pretty cool that I got to experience that,” said Lucic, who scored one of the Kings nine goals on Tuesday. “A lot of special things happened to me here in Boston, from the management, to the coaches, to all my teammates that I had here over the last eight years. Especially the fans, they really helped me to become the player and the person that I’ve become today. So to have that moment in that second TV timeout there was really special and it was definitely a pretty cool feeling.”

When the Bruins lost Boychuk, Thornton, and Jarome Iginla in two years ago, many players opined that the room grew quieter. You could make an argument that the same happened when Lucic was traded this past offseason. You could even say that the Bruins are missing Lucic. Some have even written that opposing teams are no longer afraid to play the Bruins because of Lucic’s notable absence.

That’s not totally true, but on a night where the Bruins got drubbed 9-2 by Lucic’s new team, maybe it holds a little weight. Though Lucic was shuffled up and down the lineup in his last two years in Boston, he always understood his role with the Bruins. Some might question his effort on shifts or call him a disappearing act during games, but Lucic was always aware of the team around him and what they meant to Boston.

Still, there was plenty of intrigue around Lucic’s return to Boston and how he’d be greeted after a season where many wanted him traded.

“It’s just, because of the timing of the trade and everything, I wasn’t here, there was no big press conference or anything like that that you tend to see when trades happen,” said Lucic. “It’s been a long time since I’ve been back here…I guess it’s kind of nice to have that closure and kind of get over, turn the page on that anticipation of this night coming.”

If anything, he’ll go down as one of the key players in Bruins history. He was a fan favorite, top six forward, and important cog coming onto the scene as the Bruins franchise were about to change their own course. Back then, Lucic fit the bill of the yearned, long-talked about blue collar, lunch pale identity that the Bruins once were. As time went on and the game evolved, tastes changed and with that, personnel did too.

But that time remains still in history.

During his return to Boston on Tuesday, fans cheered when he touched the puck and the few remaining wailed when he scored the Kings’ seventh goal of the night. Lucic reminded everyone of what happened back then—the highlights, the goals, the fights, the Cup.

He reminded everyone of what Bruins hockey used to be like. And on Tuesday night when he skated a lap around the TD Garden after a Kings blowout win, he reminded them of what it’s not anymore.