OTTAWA — Two exiles will return to Ottawa’s Canadian Tire Centre on Saturday: star defenceman Erik Karlsson and former super-fan Shaila Anwar, who hasn’t been to a game since the Senators traded him.

Anwar had season tickets for more than 20 years, paying $6,000 for a pair in the first row of the 300s. She’d forgone vacations in favour of winter-evening trips to the rink in Ottawa’s far-western suburbs. In the earliest days, she put off moving out on her own so she could afford the games.

“I used to think of the Canadian Tire Centre as my big, gigantic rec room,” Anwar says. “When you go to 35, 40 games a year, it becomes a part of your life.”

The Karlsson trade in September broke Anwar’s faith in the team. Now owner Eugene Melnyk is fighting on a second front, after the apparent collapse of a massive land deal that would have seen the Senators move to a new arena in downtown Ottawa.

RELATED: Erik Karlsson Trade: What It Means for the Senators & Sharks

That was for federal land called LeBreton Flats, right by Parliament Hill, that’s been fallow since an urban-renewal scheme in the 1960s stopped halfway through.

The deal with the federal government is officially on hold, but Melnyk is suing his main partner in the plan for $700 million, so nobody really thinks it’s coming back.

The feds are trying to figure out what on earth to do.

Through a spokesman, Melnyk declined to comment on his relationship with Ottawa and Ottawans.

“There’s no doubt that there’s a tension in the relationship, and has been for years, between Eugene Melnyk and the residents of Ottawa,” says Catherine McKenney, the Ottawa city councillor who represents the LeBreton Flats area.

The Senators are beloved. Melnyk, not so much.

“He’s the head of a popular sports team who has had billboards up asking him to leave,” McKenney says. “That obviously has an impact on how politicians see the relationship.”

Melnyk bought the team 15 years ago, rescuing it from bankruptcy. He was a swashbuckling figure: a billionaire who’d made his money in medical publishing and drug manufacturing, who lived in Toronto and Barbados, who bred racehorses.

Melnyk was visibly tickled to own an NHL team, the Sens were a playoff contender, and with their finances stabilized, everyone could focus on hockey. 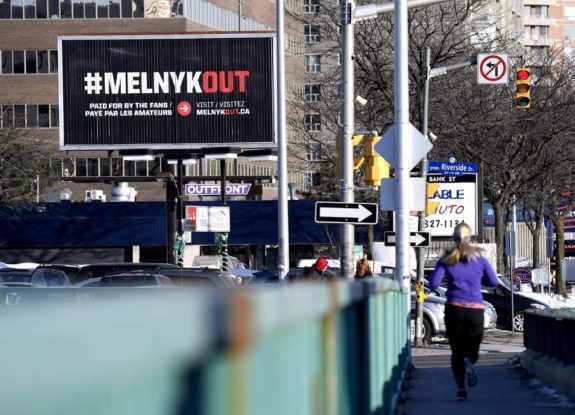 A billboard calling for Ottawa Senators owner Eugene Melnyk to sell the team is seen in Ottawa on Monday, March 19, 2018. THE CANADIAN PRESS/Justin Tang

Led by Daniel Alfredsson, the late-round draft pick who became a star in the Sens’ system, the team made it to the Stanley Cup final four years later. That turned out to be the peak.

Bryan Murray, from a town in western Quebec close to Ottawa, coached the team to the Cup final in 2007 and then moved up to the front office as general manager. Under Murray the team started going through coaches like chicken wings. The Sens’ budget tightened up, top players from 2007 left and big-name free agents stayed away.

In 2013, Alfredsson signed with the Detroit Red Wings, shocking not just fans but his own teammates. The Senators’ biggest star said publicly that he wanted a chance to win a Stanley Cup, but the deeper truth was that the Senators wouldn’t give him a payday he believed he was owed after playing at a deep discount the year before.

“He was like a god in Ottawa,” Anwar says. “He was my favourite player, without question.”

At least there was Erik Karlsson, another gifted young Swede, another product of the Senators’ farm system, busting out as a world-class offensive defenceman. The Sens made him their new captain.

Both Alfredsson and Karlsson were Ottawa folk heroes. They each moved to the city and said they intended to stay for good.

Alfredsson’s brother joined him in town and got a job with the police department. Karlsson married an Ottawa girl, Melinda Currey, who’d gone to Carleton University. When they got engaged, it wasn’t at some Swedish retreat; Karlsson Instagrammed the ring, embedded in a pizza from a trendy Ottawa restaurant.

The Karlssons bought an expensive but basically normal house in the old Glebe neighbourhood downtown. The city grieved with the Karlssons when their son was stillborn late last winter.

Melnyk himself had a nearly lethal bout with liver disease that led him to take up organ donation as a team cause. A fan saved his life with a live donation for a transplant in 2015, after a public appeal. Surgeons said 500 people stepped up to be tested.

The donor said all he wanted was for the Senators to win a championship.

In late 2015, it still seemed possible. Karlsson had won two Norris trophies as the NHL’s best defenceman and the Senators talked about building a team around him.

Melnyk’s bid for LeBreton Flats got the tentative go-ahead over a flashier but seemingly riskier bid backed by big money from Montreal.

Those plans were always going to move slowly but Melnyk himself started downplaying them after a few months of closed-door talks. Maybe the thousands of condo units supporting the rest of the project wouldn’t sell, he fretted publicly.

In January 2017, Melnyk dismissed popular president Cyril Leeder, who had been with the team since the start, without any real public explanation. That August, Murray’s cancer took him.

“Everything really changed when Leeder got fired and Bryan Murray died,” Anwar says.

The Sens’ on-ice performance tanked. Attendance sank. In March, up went those billboards, crowdfunded by angry fans, with the Twitter-friendly message “#MELNYKOUT.”

Last September, Senators traded Karlsson to San Jose before he could leave for his own big free-agent contract with some other team.

“They can do it once. But the second time… it’s a lot harder to forgive,” Anwar says.

Ottawa has handed Melnyk plenty of his own disappointments. In 2009, he pitched city council on the idea of adding a major soccer complex, complete with a top-tier MLS team, to his suburban hockey arena. Councillors said no, deciding instead to redevelop downtown Lansdowne Park into a home for a new CFL franchise.

In 2013, when the Ontario government was keen on opening new casinos across the province, Melnyk pitched for one. City council again said no.

LeBreton Flats was supposed to be the deal that made up for it all: a new rink in the heart of the city, on land Ottawans desperately want to be used for something great. Everyone was going to get what they wanted.

The city has put so many precious things in Melnyk’s hands and been hurt. Can the relationship be repaired?

“I think a lot of this is about money,” McKenney says. “If he gets his own way one day and gets to make money, I think that relationship could be repaired quickly. The truth is, I have very little sympathy for the millionaires involved.”

Anwar says she wants to be a fan who goes to all the games again, but “at this point, I really feel like it’s not happening until there’s new ownership.”

She hopes a failure at LeBreton Flats will help that happen.

“Maybe it’s a short-term pain for a long-term gain.”