Just when you thought Father Time might finally catch up with Pavel Datsyuk, he proves everyone wrong once again.

After battling a groin injury to begin the season, Datsyuk has been on a torrid pace. After notching a goal and two assists in a 3-1 win against the Carolina Hurricanes on Sunday, he has 12 goals and 10 assists in 17 games, including eight multi-point games (the Carolina game was his fourth multi-point game in his past five) and just five games with no points. [By the way, if you like this post you can subscribe to our free newsletter to receive others like it]

Datsyuk is now tied for the team lead in goals with Tomas Tatar and Gustav Nyquist with 12. At 36 years old, Datsyuk should be slowing down with his offensive production. However, he’s having one of the best starts of his 13-year career.

Datsyuk also is shooting the puck more than ever. Through his first 17 games, he has 45 shots on goal. Last year, he had 126 shots on goal in 45 games. If he continues the pace he is at 2.6 shots per game, he should easily break his shot total from last year.

Here’s the goal he scored against the Hurricanes.

This is a shot Datsyuk wouldn’t take in years’ past. Look at the setup of the play below. In the past, Datsyuk would attempt to pass it to Darren Helm, who is on the left side gliding toward the net, or Tatar, who is parked in front of the net. He might even try a point man who is offscreen back at the blue line. 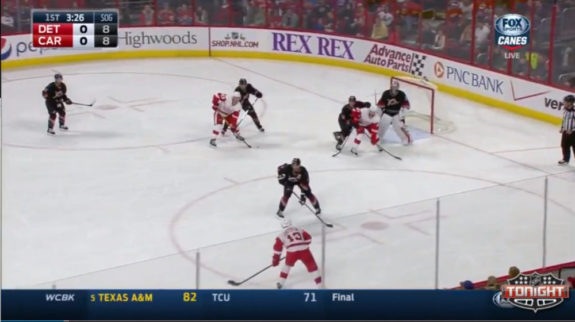 Instead, he uses three players as a screen and rips a shot through the legs of the Hurricanes defender and past Cam Ward for the game’s first goal.

Not only is he producing on the offensive side, but he’s doing all of the little things that make him one of the best two-way forwards in the NHL. He’s winning the majority of his faceoffs (57.6 percent), he’s creating turnovers (eight takeaways) and he’s racking up the minutes, as he is second on the team among forwards in time on ice per game (18:33).

These are the stats that don’t show up on a scoresheet, but they mean just as much to the team’s success as scoring goals and getting assists.

The Red Wings were doing surprisingly well with Datsyuk out of the lineup, going 8-2-2. However, Datsyuk’s presence adds a whole new dimension to this team. If he’s in the lineup, coach Mike Babcock can choose to put Henrik Zetterberg on Datsyuk’s line to create matchup problems for opposing teams, or he can separate the Euro twins, which means the opposition needs depth in order to combat them on separate lines.

Having Datsyuk in the lineup also creates problems on the power play. Generally, Babcock will put both Zetterberg and Datsyuk on the same line, but lately, he’s been splitting the two of them up, putting Datsyuk on the second power-play unit with Tatar, Riley Sheahan and Stephen Weiss.

Having two better-than-average power play units is no doubt one of the key reasons why the Red Wings are ranked in the top 10 in the league in power-play percentage.

So how long until Datsyuk starts to succumb to Father Time?

Who knows at this point. I thought for sure we were going to see the effects of his age start to wear on him, but Datsyuk has been better than ever. What will be key for him now, which is also key for the rest of the team, is to stay healthy and continue to build off the success he has had so far this season.