Defenseman Brian Dumoulin finally signed with the Pittsburgh Penguins on July 24, narrowly avoiding arbitration with a doozy of a contract. The six-year deal not only pays him over $4 million a year but also locks him on with the team for longer than any player other than Sidney Crosby himself. In the 2022-23 season, the Penguins will consist solely of Dumoulin and Crosby, which will be all they need to complete their historic eight-peat. You heard it here first, folks.

But let’s focus on the 2017-18 season: was the Dumoulin contract a good deal? His $4.1 million contract whittles down the Penguins’ available cap space to just over $6 million, with which they will presumably try to both sign Conor Sheary and a third-line center. But naysayers about this signing might not realize how much the Penguins have come to lean on Dumoulin, assigning him a role for which players generally get paid big bucks.

The first reason that the Dumoulin signing was a good idea is his age. Like many current Penguins players, Dumoulin has lifted the Stanley Cup twice despite only being in the NHL for two full seasons. That means he’s still relatively young. A six-year contract for a 25-year-old is a good range to lock a player up; Dumoulin will be just 31 when it expires.

In Dumoulin’s two full regular seasons with the Penguins, he’s played 149 games and scored just a single goal. His relatively low scoring rate—he’s totaled 31 points in 149 games—has made some observers balk at his $4 million-plus salary. But those people are underestimating just how much the Penguins have begun to lean on Dumoulin during their playoff runs. This salary is comparable to those received by similarly-used defenders on other teams across the league.

The Penguins have come to rely heavily on Dumoulin these past two years. During this past year’s playoff run, Dumoulin averaged the highest average time on the ice (ATOI) of any Penguins skater at just under 22 minutes per game.

Part of the reason for these extended minutes is because of the absence of Kris Letang, the Penguins’ usual top defender. Dumoulin averaged slightly fewer minutes in the 2016 playoffs alongside a healthy Letang, ranking third in ice time for the Penguins after Letang and Trevor Daley. (It should be noted, however, that Daley only played 15 games before breaking his ankle, as opposed to Letang and Dumoulin’s 23 and 25 games, respectively.) But in 2017, with Letang sidelined, Dumoulin stepped up into a key role on the first defensive pair.

Letang is often injured; Penguins fans know that all too well. He hasn’t played a full regular season since 2010-11. But in the past, he’s been an important part of the Penguins’ Cup runs. In the first two Cup wins of the Crosby era (2009 and 2016), Letang was an instrumental part of the team, playing 23 games in each run.

The 2017 Cup is the first time the Penguins have won in the modern era without Letang. And while doing it, they leaned on Dumoulin. That serves as an indication of how important Dumoulin’s role with the Penguins has become.

So let’s look at the other 15 teams that entered the 2017 playoffs, and at the defensemen that played the same kind of role Dumoulin did, to see how his new contract stacks up.

Defenders Across the League

Sixteen defenders shouldered the highest average ice time on their team during the 2017 playoffs. When comparing these 16 players with the highest ATOI on their team (all above 20 minutes per game), we see a noticeable similarity: none of them are making less than $4 million a year in 2017-18. Dumoulin, at a $4.1 million AAV, is towards the cheaper end of the scale. 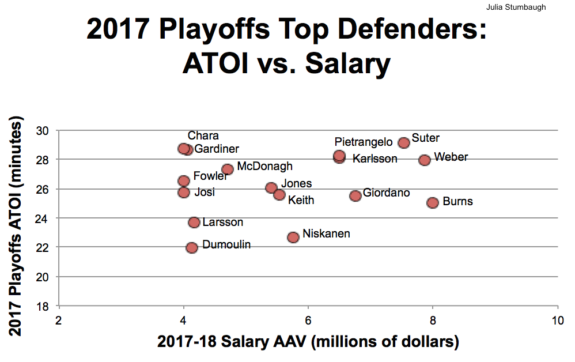 This isn’t an argument that Dumoulin is even near the same skill level as many of these other players. Sorry, Dumo, but you’re no Karlsson or Burns. And although having a stay-at-home defender on the team isn’t a bad thing, Dumoulin’s lack of offensive production keeps him from being an elite defender. This is an argument instead that Dumoulin has been playing a crucial role on the team as a top-pair playoff defender. And for that role, teams tend to pay a significant amount of money, as is indicated in the graph above.

Sure, the Penguins’ most skilled defenders are currently Letang and Justin Schultz. But Dumoulin served as a top-pair defender on a Cup-winning team, and if the Penguins wanted to keep him, they were going to have to pay him accordingly. His new salary is a reasonable deal for a team that had the cap space.

Dumoulin has been a reliable defender for the Penguins in an era when they’ve lacked such players. With Daley gone and Letang’s injury history, his role on the team will only increase more in the future. Locking him in for six years before a probable age decline is a smart move, and it’s very likely that a cheaper price wasn’t an option.

Julia Stumbaugh is a student at the College of William & Mary.