As strange as it may sound, the Pittsburgh Penguins have had a problem at the center position the past two seasons. Despite being blessed with two of the most dominant center icemen of their generation in Sidney Crosby and Evgeni Malkin, the lack of production from the rest of the centers has been a thorn in the Penguins’ collective side.

It was one the main reasons they were bounced out of the playoffs last season by a deeper Washington Capitals team and also why they started slowly this season as line changes proved ineffective and the Penguins lost 13 of their first 21 games.  Something had to be done and Penguins general manager Jim Rutherford was not going to sit back.

Brassard Out, Bjugstad In

Having watched his blockbuster trade for Derick Brassard yield mixed results last season, Rutherford went shopping for centers in the offseason, signing free agent Derek Grant from the Anaheim Ducks, re-signing another prospective third-line center candidate, Riley Sheahan, to a one-year deal and bringing back former Penguin Matt Cullen after one season with the Minnesota Wild.

Unfortunately, quantity didn’t result in quality, and with Brassard on-pace for his worst offensive performance since his rookie season and set to be an unrestricted free agent at the end of this season, Rutherford scoured the league for a replacement before finding a willing partner in the Florida Panthers.

With the Panthers out of the playoff picture and their general manager Dale Tallon wanting to clear salary cap space before this summer’s free-agent frenzy, Rutherford pried Nick Bjugstad and Jared McCann away from the Panthers in exchange for Brassard and another free agent-to be in Sheahan, along with a second-round and two fourth-round picks. 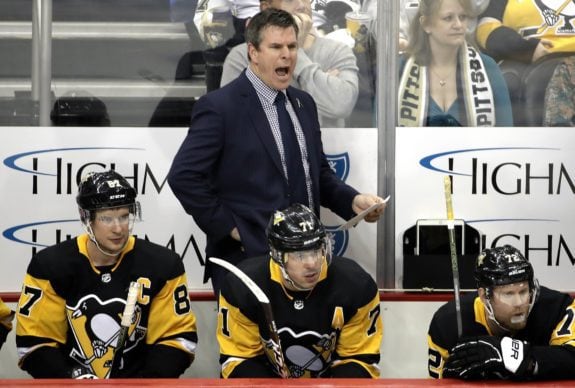 In doing so, Rutherford appears to have not only solidified the center position for this season and beyond, but has also given Penguins head coach Mike Sullivan flexibility which could lead to some intriguing line combinations.  While Bjugstad seems destined to begin his tenure with the Penguins playing alongside Phil Kessel and centering the third line, Jared McCann could also see some time in that role, as well.

Regarded as a “two-way center with outstanding hockey IQ” and possessing “intriguing playmaking qualities,” McCann plays the same type of 200-foot game that made Nick Bonino so effective during the Penguins’ 2016 and 2017 Stanley Cup runs when he teamed with Carl Hagelin and Kessel to form the “HBK line.”

In addition, Bjugstad’s 6-foot-6 frame, booming shot and recent experience on the right wing with the Panthers will make it all the more tempting for Mike Sullivan to occasionally pair him with Crosby or Malkin, which could prove to be a huge matchup problem for any playoff opponent.

Teddy Blueger Proves to Be Worth the Wait

While the arrival of Bjugstad and McCann on Feb. 1 was undoubtedly the biggest story surrounding the Penguins last week, seemingly forgotten was the long-awaited call up of Teddy Blueger from the AHL three days prior. However, with a goal in each of his first two NHL games, he will not be overlooked for long.

Like McCann, Blueger was originally projected to be “a skilled, two-way player who possesses a great hockey IQ” but, having been nearly a point-per-game player for the Wilkes-Barre/Scranton Penguins this season, he has shown the ability to do more than just chip in the occasional goal.

In addition, Blueger’s success in the faceoff circle and his tenacious pursuit of the puck will bolster the Penguins’ ability to kill penalties and reduce the workload on Crosby and Jake Guentzel who have recently been pressed into penalty-killing duty out of necessity. 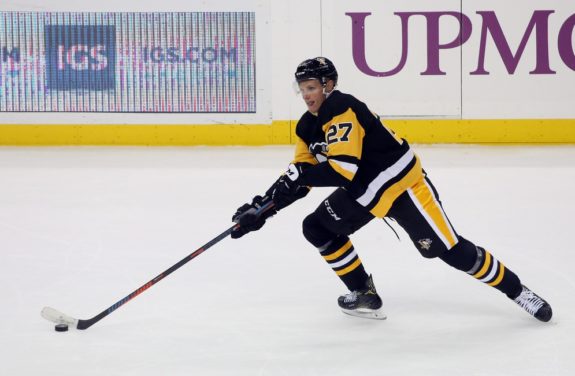 With this latest infusion of talent, the Penguins now have no less than seven centers on their roster so there will likely be an adjustment period as the coaching staff tries to find the best line combinations. In addition, with almost three weeks remaining until the NHL trade deadline on Feb. 25, there is still plenty of time to make additional roster moves if the need arises and the opportunity presents itself.

As demonstrated by the Brassard deal last season, no trade or call-up can guarantee success on the ice but the additions of Bjugstad, Blueger and McCann have turned a weakness into a strength and, at 26, 24 and 22 years of age, respectively, the Penguins should have a wealth of talent at the center position for the foreseeable future.