Throughout this historic playoff run for the San Jose Sharks, they have been the more skilled team and the faster team. The Sharks out-skated their bitter rival Los Angeles Kings, out-skilled the pesky Nashville Predators, and out-played the emotional David Backes and his St. Louis Blues. Yes, the boys in teal have been able to capitalize on special teams play and roll four producing lines when it counts.

It really rings true, though, that everything ramps up when it all is on the line. Since the drop of the puck in Game 1 of the Stanley Cup Final, the Sharks have not looked like the Sharks of the last three rounds. Instead, the Pittsburgh Penguins have come out as the superior squad, dominating four out of the six periods – plus the few minutes of overtime play – in this series thus far.

Top Sharks Being Kept at Bay

The Sharks’ studs have been too quiet in the first two games of the Final, as Joe Pavelski, Joe Thornton, Brent Burns and Logan Couture have all been unable to contribute significantly on offense. They have a combined -3 rating through two games, with no goals and only four assists on the stat sheets.

But the stats that standout the most are the zero points between the two Joes. Neither Pavelski nor Thornton have been able crack the code to Matt Murray and the Penguins’ defensive corps. Both have just three shots each on net through the first two games, and much of this can be credited to the Penguins’ ability to stay out of the penalty box. The Sharks have only had three opportunities with the man-advantage, and have only capitalized on one of them, which was their first goal in Game 1.

Martin Jones Doing All He Can

If it was not for Martin Jones, the Sharks would be in a much worse place than they are. The Sharks have been brutally outshot 71-48, and have leaned heavily on Jones to come up with some huge saves to keep his team in both games.

Sure, being down 2-0 in the Stanley Cup Final is not a desirable position to be in – as the hockey stats gurus will cite the 10 percent success rate of teams coming back from such a deficit – but when it comes down it, San Jose has remained in these first two games, and has had the opportunities to win both.

Each game has been determined by just a single goal, with Game 2 coming down to a sudden death overtime period that Penguins winger Conor Sheary secured with a smooth wrist shot past the glove of Jones. But don’t blame the Shark between the pipes for these losses, as he is barely getting any significant offensive support from his forwards.

Turn Up The Tank

San Jose is going to have to turn up more than just the effort on the ice. The San Jose fans are going to have to turn up the decibels if they want to see their ‘Team Teal’ avoid a quick exit. During this postseason the Sharks are 7-2 on home ice, and will certainly be looking to keep that winning record going. “It’s extremely loud, extremely intimidating and getting last change has definitely helped us,” said Thornton in a CSN Bay Area report. 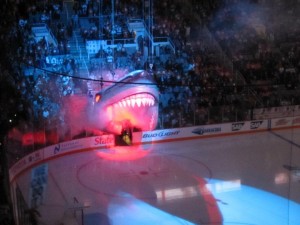 The return home could not come at a better time for the Sharks, who certainly need to find a boost and shift in their game. The speed of the Penguins has been a big contributor to their success, as the Sharks haven’t faced an opponent quite like Pittsburgh this postseason. Saturday’s Game 3 will determine whether the Sharks can come up with an answer for Sidney Crosby and his pack of Penguins, or if they will be looking into the eyes of one of their worst nightmares in history, that of going down 3-0 in their first ever Stanley Cup Final appearance.

Ben is a graduate of the University of Southern California with a degree in Broadcast and Digital Journalism. Hailing from the East SF Bay Area and raised on college football and basketball, Ben found his true sports passion in ice hockey, watching the boys in teal from San Jose. He covers the San Jose Sharks for TheHockeyWriters.