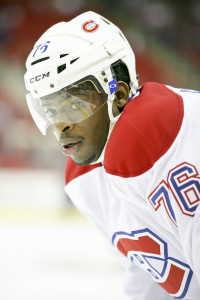 The media buzz surrounding the Montreal Canadiens’ locker room this week should have been about the four consecutive wins the team had strung together heading into last night’s matchup against the Ottawa Senators. It should have centered around the new team dynamic created by head coach Michel Therrien, or the rock-solid performance of two rookies who, by all accounts, were not even supposed to make the club out of training camp.

But instead, the headlines were once again dominated by a player who has yet to dress for a single game this season. Much to the chagrin of many Habs’ players, it was the status of PK Subban’s contract which demanded the lion’s share of the spotlight this week in Montreal, despite the team’s unexpectedly strong start to the season.

Social media outlets were set abuzz with whispers of dissent as conspiracy theorists seized upon a few exasperated comments, made by fellow blue-liners Josh Gorges and Andrei Markov, following a game day skate. The theory goes something like this:

Not many players sent congratulatory tweets after PK signed his extension, and two players were annoyed by constant questioning about a player they had yet to see in uniform this season. Therefore, PK Subban is a pariah in the locker room and will not be welcomed back by his teammates.

Here’s why all of that is complete nonsense:

First off, the perception that Subban was unfairly holding out couldn’t be further from the truth. Contract negotiations are simply a part of the process, and were it not for the lockout, this deal would have been completed quietly over the course of the summer. Instead, PK was in the unique position of being among the very first to negotiate a deal under the conditions of a brand new CBA. It makes sense that it might take a little extra time, and every player in the room understands this.

Another reason this deal became so convoluted is that the market is a mess right now.  Drew Doughty and the LA Kings saw to that when they agreed to an eight year, $56 million contract which essentially redefined the standard of how much – and how early – elite young defencemen get paid.

In Detroit, Jonathan Ericsson earns $3.25 million per season and has averaged 2.6 goals and 13 assists per year in his young career. Subban averages 10.5 goals to go along with 26.5 assists, and signed for an average of less than $3 million. Not only does he have higher ceiling than Ericsson, he is also five years younger, meaning he has much more left to give in the long run.

To say Subban was holding out unfairly is…well…unfair. When one comparable is making $7 million per year and another is making $3.25 million, where do you even start negotiations?

By the time he signed for less than either of them, all concerns of selfishness should have been laid to rest. So how does one explain the apparent backlash from teammates? I’ll be the first to admit that it’s just a theory, but my thoughts on the issue are pretty simple; it’s the media’s fault.

Desperate to stir up any kind of controversy surrounding the Canadiens, and PK in particular, this story was easy pickings for those who are too lazy to generate a real story. Jamming a microphone in someone’s face and asking them questions which are not only repetitive, but clearly irrelevant to the game at hand will eventually lead to an annoyed response. Once you’ve got that on film, it’s an easy spin that is guaranteed to garner some attention.

Look carefully at the tape of Gorges’ and Markov’s responses. Hear any mention whatsoever of either player being annoyed with PK? Or were both responses directly aimed at the fact that the questions being asked had little to do with the game for which they were preparing?

The fact is, Subban signed a fair deal with a team that sees him as a cornerstone for the future. He took an appropriate term with a very fair price tag, and will get his big deal two years from now, as is the industry standard. Negotiations took place during a difficult time, and so they took a little longer than usual. When reporters insisted upon asking annoying and inappropriately timed questions about the situation, a couple of players became annoyed.

It is literally a non-story… but non-stories are not acceptable here in Montreal. So a few desperate attention-seekers climbed up onto their soap-boxes and started shouting ‘fire’ in the crowded theatre that is the Montreal hockey scene. For nothing more than their own personal gain, they manipulated two players’ annoyance with their own line of questioning into an entire team’s disliking of a key young player.

PK Subban’s contract negotiations may not have been the most amicable in Canadiens’ history, but they were also nowhere near the worst. At the end of the day, a very good player signed a fair deal for a fair term. It may not sell many newspapers, but it’s the truth… regardless of what else you might read.