Whether you’re rooting for the team wearing dark jerseys or the team wearing white jerseys, it’s the men in stripes that seem to be getting much of the attention this spring. Referees have long been used as scapegoats by teams after losses, but are they finally starting to earn their grief? In just two weeks, the playoffs have provided us with a plethora of opportunities to complain about playoff officiating.

Before we get into the bad calls, player complaints, and conspiracy theories, take a moment to read up on how officials are chosen for the playoffs. Former referee Kerry Fraser recently shed light on how officials are judged through the regular season and into the postseason. Among his final takeaways:

“I had the good fortune to work the first round from the TSN studio with Paul Maurice, who coached in the KHL last season and GM Craig Button, who is no stranger to international competition and scouting. Both of them echoed my belief that the NHL officials are the best in the world at what they do!”

Now let’s take a look at just a few of the examples of questionable officiating this spring.

As a Stanley Cup favorite with a roster that surpasses a few Olympic teams, the Pittsburgh Penguins are frequently under the microscope for how they are treated by the NHL and their referees. At this point, many hockey fans around the league are sick of seeing and hearing about Sidney Crosby and the Penguins on national TV as one of the NHL’s darling teams over and over again. This general dislike of both the Penguins and Crosby can lead to some interesting viewpoints.

With the Pittsburgh Penguins and New York Islanders battling for a pivotal victory in overtime of Game 3, Sidney Crosby drove to the net with the puck and ended up on the ice. Islanders defenseman Brian Strait was called for a two minute holding penalty and the Penguins would score shortly thereafter on the powerplay to win the game 4-3 in overtime and take a 2-1 series lead.

The holding call was immediately the focus of controversy as NBC analysts questioned it and Islanders fans grew incensed. Some writers thought it was a necessary call because it prevented a scoring chance. Others saw inconsistent officiating as the issue…even if that point was lost in attacking Crosby as a diver.

I see Strait holding onto Crosby momentarily and then Crosby going down as their right skates collide (watch for how Crosby’s right skate goes outward). In the regular season, it would have been a no-brainer call. Despite being a Penguins fan though, and thinking that it was certainly a penalty by the rule book, I understood why Islanders fans were upset. Should that be a call in playoff overtime?

This led me to my next question, which was why am I questioning if a call should be different in playoff overtime than in the regular season. This is what years of watching the NHL has done to all fans. We have different expectations in the first period, the third period, overtime, and especially in the playoffs. Pens fans felt that was a penalty, and they were right based on the rules. Isles fans thought that shouldn’t have been called in overtime, and they were right based on experience.

Somehow, the NHL and their refs created this scenario where both sides had a legitimate point about whether the rules should be followed or not. Seth Rorabaugh of the Pittsburgh Post-Gazette alluded to that issue again later in the week during the Penguins-Islanders series:

Regular season, that’s a boarding call. But unlike other professional leagues, this league has two sets of rules.

With that, I quickly realized that fans have a legitimate argument about the officiating. Great calls, bad calls, inconsistent calls – the problem is that the rule book isn’t followed the same way in every circumstance. Inherently, our expectations for officiating have now become inconsistent. Holding in the first period is rarely called the same way that holding is late in the third period of a close game. There’s even less consistency going into overtime. Referees are caught between calling infractions by the rules and not wanting to have a hand in the outcome of the game. Maybe it’s time that refs admit that no matter what, they will always have a hand in the outcome of the game and they need to accept that.

Perhaps we have reached the point where players need a color-coded sign on the penalty box that makes them aware of the officiating level:

• Red – Everything will be called.
• Yellow – Obstruction is okay, but everything else will be called.
• Green – Do whatever you want as long as no one is injured.
• Gray – Calls will only be made if a player is injured, regardless of whether the referee sees it or not.
• Black – Injuries are fine too as long as a referee is not looking directly at you.

Sticking with the Penguins but moving on to the next series, Game 1 against the Ottawa Senators led to more questions about officiating. After a whistle had stopped play, Brooks Orpik opted to cross-check Cory Conacher directly in the jaw. Conacher was already on his knees, trying to get up, and disengaged with the play when Orpik felt that was necessary. I was baffled at how the Senators didn’t receive a powerplay for it and I was not the only one.

As we just saw with Orpik crosscheck on Conacher, the second round promises to produce the same shoddy officiating as the first. — Ken Campbell (@THNKenCampbell) May 15, 2013

Unfortunately, I couldn’t find a video clip on it because the NHL doesn’t make highlights available of “infractions that should have been called.” Okay, so if Orpik’s cross-check to the face is fine, then the referees are clearly going to let the players play. No, that’s not right either as James Neal found out later in the game (skip to 1:33:18 on the video).

Could that be a holding penalty? Yes, if it’s called strictly by the rule book – that is a holding penalty. How many times do forwards do that in the course of a game though when trying to beat a defender one-on-one? Should that be called over a blatant cross-check to the face? It’s becoming more and more difficult to determine what is going to be a penalty and it’s exasperating to watch the inconsistency and unpredictability. This is hardly limited to games with the Penguins though.

Moving back to the first round, the San Jose Sharks were on the verge of sweeping the Vancouver Canucks as they took Game 4 to overtime. While the Canucks hadn’t played well enough to earn a win necessarily, they surely didn’t expect to lose in overtime following a questionable call. Daniel Sedin was called for boarding in overtime on what was an awkward, but shoulder to shoulder hit.

The Sharks would score on the ensuing powerplay and that was it for Vancouver’s postseason. While I won’t go as far as saying there is a referee conspiracy theory going on with Vancouver, that’s a tough call to watch your season end with.

The Sharks would feel the other end of it just a week later in the second round. Late in the game with a 3-2 lead, San Jose committed a tripping penalty that gave the Kings a powerplay and a chance to tie the game. Making matters worse, defenseman Marc-Edouard Vlasic was then called for a delay of game penalty on the penalty kill to give the Kings a 5 on 3. 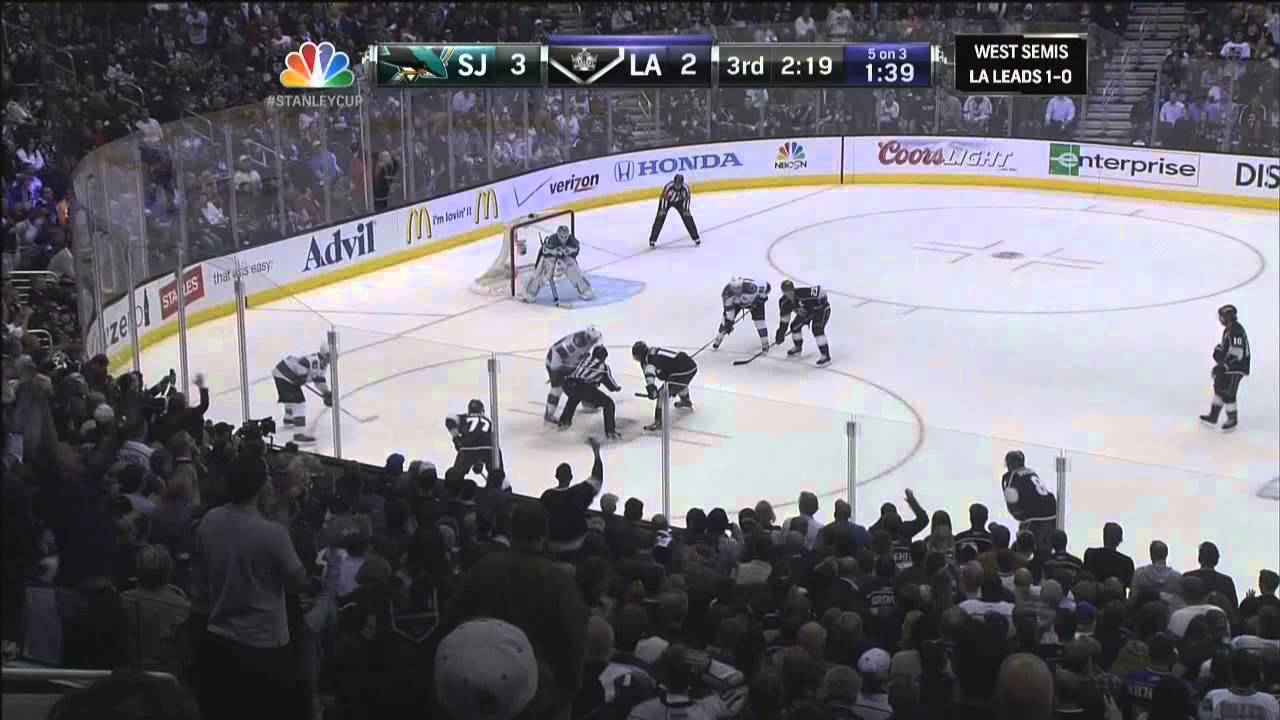 It certainly looks like the puck nicks Jeff Carter’s arm or jersey on its way over the glass, which by rule, should have negated the call. The Kings went on to score on the 5 on 3 and the remaining 5 on 4 to win the game 4-3 in regulation. While the Sharks certainly have to find a way to kill the penalties in that situation, a 5 on 3 that shouldn’t exist is a brutal shift in momentum to deal with. It prompted plenty of talk about the delay of game penalty in general, and furthermore, if there needs to be a safeguard against questionable calls.

Delay of game penalty at the end is why we need coach’s challenge in #NHL. looked like puck glanced off Carter’s sleeve #sharks #kings

But alas, even a coach’s challenge won’t fix all complaints.

While many teams and fans will point to individual plays and individual calls that are being officiated poorly, some teams go the blanket route and blame a whole series on it. That’s what General Manager George McPhee and captain Alexander Ovechkin opted to do upon the Capitals’ first round exit this season. Ovechkin started it off with the following,

“I don’t know whether the refs were predisposed against us or the league. But to not give obvious penalties [against the Rangers], while for us any little thing was immediately penalized.”

He then received reinforcement from McPhee:

“I don’t think there’s a league conspiracy, but it sure didn’t feel right. Alex wasn’t wrong,”

Do they have a valid complaint? Perhaps the difference is some teams and players know the tendencies of some referees while others are clueless. Maybe, the answer is that all teams should scout referees before the game to adjust to the officiating.

With the advancements in replays, social media, and fan knowledge, referees are under more scrutiny than ever before. The game has changed, the rules have changed, and the fans have changed.

Referees don’t have to be perfect. Any logical fan will tell you that perfection is impossible and there are understandable mistakes. The delay of game against San Jose is an understandable mistake. It was just unfortunately timed and brings about the question of why there is no safeguard (read: replay) to help referees in that situation.

Referees should be consistent though. The concept of “letting them play” or “putting the whistles away” late in games needs to disappear. Penalties are penalties no matter when they occur. The optional enforcement of rules is starting to get out of hand and it’s an insult to the sport, the players, and the fans. Not only that, but it’s confusing players and fans as well. We don’t need perfection. We just want to know why sometimes cross-checking someone in the face is okay but putting a hand on their jersey is not. The rule book seems to skip that part.