There is a consensus that the Sedin twins will remain in Vancouver until they decide to hang up their skates.

That is a scenario that many Canucks fans would be happy to see. The Sedins have been the two best players in franchise history. You could make an argument for players such as Trevor Linden and Pavel Bure, but no two players have given as much to the Canucks as the Sedins have for the entirety of their careers. They are two of the most talented and humble athletes to skate in the NHL this century.

The Sedins would undoubtedly love to stick around Vancouver until this team is ready to take another run at the Stanley Cup, but the mismanagement of this organization means that scenario is a distant possibility. With the Sedins unlikely to be on a Cup-contending team in Vancouver again, is trading them a possibility?

Linden refuted the possibility of trading the Sedins in an interview with Sportsnet earlier this month, citing that it would be “unfair” to the Sedins to completely rebuild this team.

What is unfair to the Sedins, is pretending that this organization is close to competing again when they aren’t even close.

Earlier this month, Jason Botchford mentioned in The Provies that he knew of at least two teams that would be willing to trade for the Sedins at their full $14 million salary. He mentions that other teams would be interested if the Canucks were to swallow some of that cap hit.

If the Sedins were to be traded, they would have final say on where they want to go since they both have no-movement clauses in their contracts. It is almost impossible to judge where the Sedins would accept a trade to since they have routinely stated that they want to remain in Vancouver.

For this article, let’s say that the Canucks would be willing to eat $7 million of that cap hit if they traded the Sedins during the offseason, in exchange for high draft picks and at least one young NHL-ready forward.

Any trade involving the Sedins is unlikely to happen until the offseason. Since this is all guesswork, I’ve included three possible teams, instead of two, that could be interested in acquiring the Sedins. Let me know if the comments below if you agree/disagree with these choices.

Could a reunion with Roberto Luongo fuel the Panthers to claw their way back to the Stanley Cup Final? The Twins almost won the Stanley Cup with Luongo in the crease, and maybe there’s an opportunity for them to do it in a secondary role for the Panthers. 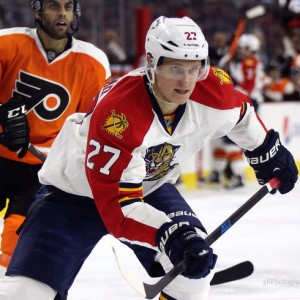 This franchise has a penchant for making interesting moves. They have already fired their coach and overhauled their defence since winning the Atlantic Division title last season. While the results aren’t there yet, this is still a team that could compete for the Stanley Cup if these bold moves pay off.

The Panthers are an interesting mix of young talent, complemented by veteran players. The Sedins would be the perfect second-line players behind the likes of Jonathan Huberdeau and Aleksander Barkov, especially if Jaromir Jagr decides to retire.

While most organizations would be hesitant to trade away younger players for veterans, Florida already made a move like that this year when they traded away Lawson Crouse to the Arizone Coyotes. Although they made that move for different reasons, it was an unusual decision to give up on a first-round pick so suddenly.

The Panthers are a bottom-10 team in terms of scoring this season, and surely could benefit from adding the Sedins. In terms of a young player the Canucks could acquire in return, Nick Bjugstad seems to fit Benning’s mold. The Canucks organization has been interested in Bjugstad since the Mike Gillis era. However, the big power forward has struggled mightily this season since returning from injury. Still, he’s only 24-years-old and his signed for $4.1 million through 2020-21. He seems like the odd man out if the Sedins were to join Luongo down in Fort Lauderdale. 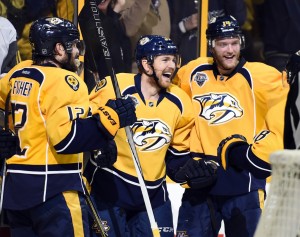 This seems like the least likely team the Sedins would accept a trade to, but having the Sedins join the Predators in the Music City would surely boost the Predators’ odds as Stanley Cup favourites.

Nashville, like Florida, has shown that they aren’t scared of making controversial moves. In the last year alone, they have traded away both Shea Weber and Seth Jones. It’s not too often you see a team trade away both their best defenceman and best young defenceman. I know what the Roman Josi fan club is thinking right now about Weber being the Preds’ best defenceman, but save that for another time.

The Predators are a top-10 team in scoring at the moment, and they would only be more dangerous by adding the Sedins to their lineup. The twins could possibly play with Filip Forsberg, one of the best young Swedish forwards in the game.

In terms of who could come back the other way, there probably isn’t anyone who is going to excite Canucks fans. Forsberg, James Neal and Ryan Johansen aren’t going anywhere. Could Nashville part with Craig Smith, Colin Wilson or the surprising Victor Arvidsson? Smith and Wilson seem like Benning’s kind of players, but it’s hard to ignore Arvidsson’s early success this year.

Seeing the Sedins wear mustard yellow jerseys down in Nashville would be strange, but the same could have been said about P.K. Subban. Look how that turned out.

Would the Canucks consider trading the Sedins to a division rival? It would surely help the proponents of Team Tank.

A trade to a team within the division makes sense for a couple of reasons. The Sedins would remain closer to home in Vancouver, for one. There are also teams in the Pacific Division, such as the Sharks, who have legitimate Stanley Cup aspirations.

The Sharks are known for employing veteran players, such as Joe Thornton and Patrick Marleau, who have become additions to the core of Logan Couture, Joe Pavelski and Brent Burns. With Marleau’s play declining and his contract expiring, is it possible that the Sharks would trade for the Sedins to make another run at the Stanley Cup in 2017-18? It would give the Sharks one of the most potent offences in the league.

They would have some serious money tied up in three aging players if that were the case, but a trade would be easier to swallow if the Canucks ate some of the Sedins salary. Look for Mikkel Boedker as someone who could come back in return. The Danish winger has gotten off to a sluggish start in San Jose, and the Sharks could be looking to get out of that four-year deal if things don’t turn around.

Just by evaluating these three possible trade scenarios, it seems even more likely that the Sedins will retire in Vancouver Canucks uniforms.

Judging on the Sedins’ desires along with Linden and Jim Benning’s comments, the Sedins will likely remain Canucks for the rest of their careers. If that’s what the Sedins want, then that’s where they deserve to stay.

It is almost impossible for the Canucks to get full value for the Sedins in any deal. You just don’t see many teams giving away quality assets for players that are considered to be rentals. Even if the Sedins were traded during the offseason, they would be considered “rental players” for the last year of their contracts.

It’s hard for Canucks fans to be pleased by giving up the best players in franchise history for the likes of Bjugstad, Wilson and Boedker. There is no way to get full value for the Sedins without a young roster player, blue-chip prospect, and a high draft pick. With an emphasis on drafting and development, that kind of return for the Sedins is almost guaranteed not to happen.

Unless there is an offer that blows the Canucks away, combined with the Sedins willingly waiving their no-movement clause, the Sedins should retire as Canucks. There are too many roadblocks and complications to see a deal like this becoming a possibility. However, if the Canucks finish their season as the worst team in the league, then a deal like this seems just a little more likely.