The Ottawa Senators were able to end their losing streak last night against the New Jersey Devils in a tight-scoring game. Now they will look to begin a streak of the winning variety as they visit the Islanders for the first time this season. Like against the Devils last night, the Senators will once again be facing a team that is on its own losing streak, as the Islanders have lost four straight.

Second in the Atlantic Division

Last in the Eastern Conference 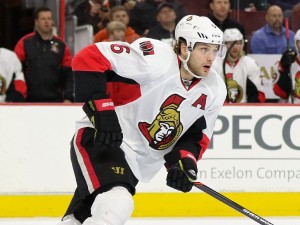 1) Bobby Ryan has been picking it up of late for the Senators. After going goalless for 16 games, he has scored two goals in his last two games, helping the team get three out of a possible four points. If the Senators are to stay in the playoff picture, they will need Ryan to continue producing.

2) Although the Islanders sit last in the Eastern Conference standings, the Senators will still have to be careful going into this game. John Tavares is always a threat when he is on the ice and makes whomever he plays with better. The Islanders have actually been one of the top scoring teams during their past 10 games, so Ottawa’s defensive system will need to be strong to contain them.

3) In terms of production, Erik Karlsson has slowed down during the past few games. He has one assist in his last four games, but he continues to do the things he does well to help win games. He has had very strong possession numbers, and that has spread out to the rest of the team. He continues to constantly provide clean zone exits, and the forwards have benefited. It may not be showing on the stats sheet recently, but Karlsson’s impact is still evident.

4) Ottawa will have a large advantage in the special teams battle, as the Islanders are among the league’s worst teams in both power-play (13.4%) and penalty-kill (78.6%). The Senators may feel that they can be a little more physical this game, as if they take penalties that they will have an easier time killing off the Islanders’ power-play and perhaps steal momentum.

5) New York’s main goaltender in Jaroslav Halak has not been able to deliver the numbers expected out of a good starter. Thomas Greiss has been playing better, but head coach Jack Capuano has decided to go with Jean-François Berube. This will be only his second start this season, though it will be his second straight, with his last game coming in an overtime loss against the Buffalo Sabres where he made 34 saves on 37 shots. Many Islanders observers believe that his time is now, so he will be looking to earn another start after tonight.

6) Andrew Hammond will get his first start since October, as Mike Condon will get the night off from playing the night prior. This game will be a statement game from Hammond to demonstrate that he is worthy of staying in the NHL and not spending the most of his career in the minors.

The #Sens talk about the challenge of playing back-to-back games and Andrew Hammond gets the start in goal tonight vs. the Islanders. pic.twitter.com/DtBNQVEjpI

As the Senators face another team that is hovering at the bottom of the Eastern Conference standings, they will look to start strong to try and take the wind out of New York’s sails. Like the Devils yesterday, the Islanders do not have much in secondary scoring, therefore shutting down John Tavares’ line will go a long way to winning the game.