For all the fanfare a first round draft pick gets in the NHL, there have been many star players that went unheralded throughout their junior career, not attracting much attention until blossoming into stars at the NHL level. From Pavel Datsyuk (171st in 1998) to Jamie Benn (129th in 2007), the league is littered with late-round picks that have blossomed into high-profile studs.

The Washington Capitals are currently atop the NHL standings due to their strong draft record, as several key contributors to their team were unearthed by the Capitals in the later rounds of the draft. Despite their success in recent seasons, the Capitals still possess a strong farm system relative to other organizations. One of the biggest names currently plying their trade for the Caps’ AHL team is Riley Barber, a 22-year old winger opening eyes with his impressive play in his first professional season. 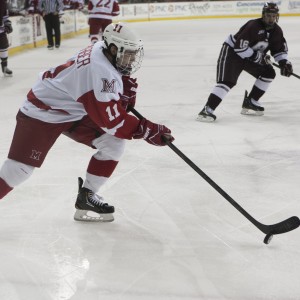 Playing for the famous Compuware hockey program in Michigan, Barber showed enough potential to become the first overall pick of the USHL’s 2010 Draft. Despite interest for him to join the United States National Development Program, Barber began the 2010-2011 season with the Dubuque Fighting Saints. There, he played 57 games, tallying 28 points and helping the Fighting Saints capture the first championship in team history. After the conclusion of the USHL playoffs, Barber joined the U.S. Under-17 Development Team in preparation for his 2012 Draft year.

Barber struggled the following season, only putting up 36 points in 60 games played with the US Development Team. However, he showcased his ability with a 3-point performance in the Under-18 World Championships as a member of Team USA. His promising offensive tools, paired with a strong two-way game were on full display, making Barber one of the more intriguing prospects in the draft. The Capitals saw enough potential in Barber to take him with the 167th overall pick of the 2012 Draft, a decision they are likely celebrating at this point in his career.

Barber joined the Miami University Redhawks for the 2011-2012 season, where he proceeded to far outperform expectations with 39 points in just 40 games as a freshman, leading first-year players in average points per game. This performance saw Barber named to USA’s World Junior Championship team, where he posted 6 points in 7 games against the best junior players in the world and captured a gold medal along the way.

Barber continued his high-scoring ways in the next two seasons with the Redhawks, tallying 39 goals and 84 points in just 76 games. Barber again played for the United States at the 2014 World Junior Championships, leading the team in goals (four) and captaining his team to a fifth-place finish. Following his third year with the Redhawks, Barber signed a three-year entry level contract with the Capitals. 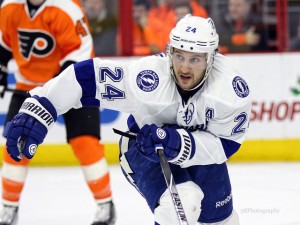 This year, Barber finds himself second on the Hershey Bears in scoring behind AHL scoring leader Chris Bourque with 15 goals and 35 points. Despite his impressive scoring numbers in his first AHL season, Barber is also cementing himself as a future NHL player with a mature two-way game that has him looking much older than 22 years of age and knocking on the door to the NHL. The Capitals have several free agents this offseason, Barber could make himself the front-runner for a spot with the Capitals with a strong rest of the season. With his leadership history, offensive tools, and NHL-ready defensive game, Barber could make a big impact with the NHL-best Capitals in the very near future.