Papa John’s Pizza better be ready to give out lots of discounted pizzas to New York Rangers hockey fans this season. The popular chain offers fans a half off coupon when the Rangers score three or more goals and after a big 5-2 win over the Winnipeg Jets, the Rangers are officially on a five-game winning streak in which they have not only won, but won by multiple goals in every one.

This string of scoring dominance is a surprising change in what fans are used to seeing and with legendary goaltender Henrik Lundqvist manning the crease, this Rangers team could be something extremely special if they can keep up this spectacular level of play.

Through 13 games, the Rangers have scored 55 goals.  One big reason why this is happening is the unique chemistry every line seems to have. With six players over nine points so far this season, the Rangers’ offense has clicked in nearly every game they have played in. With the pace of over four goals scored per game, there is something special carried throughout every line of forwards that has worked to perfection so far this year.

The way the Rangers have scored so far shows the insane potential that the team has. Most teams that have multiple fresh faces on their roster struggle out of the gate, but that has just not been the case so far this year. Every single addition to the roster has put up at least one point. With the offensive resurgence of 29-year-old Michael Grabner, who is currently leading the team in goals, the newcomers of the Rangers’ roster have all helped to make this team extremely scary.

Continually we see hockey teams that score in bunches but also get lit up on a nightly basis. The Rangers are leading the league in scoring so far through 13 games, averaging 4.2 goals per game. Defensively, they are only allowing 2.2 goals per game. That number would put them at third, just behind the Minnesota Wild and Columbus Blue Jackets. With an elite offense and good defensive work in their own third of the ice, the pressure is taken off of Lundqvist. As he ages, there is nothing better than relieving the pressure from a goaltender who has spent the good part of the last decade keeping the Rangers in games. 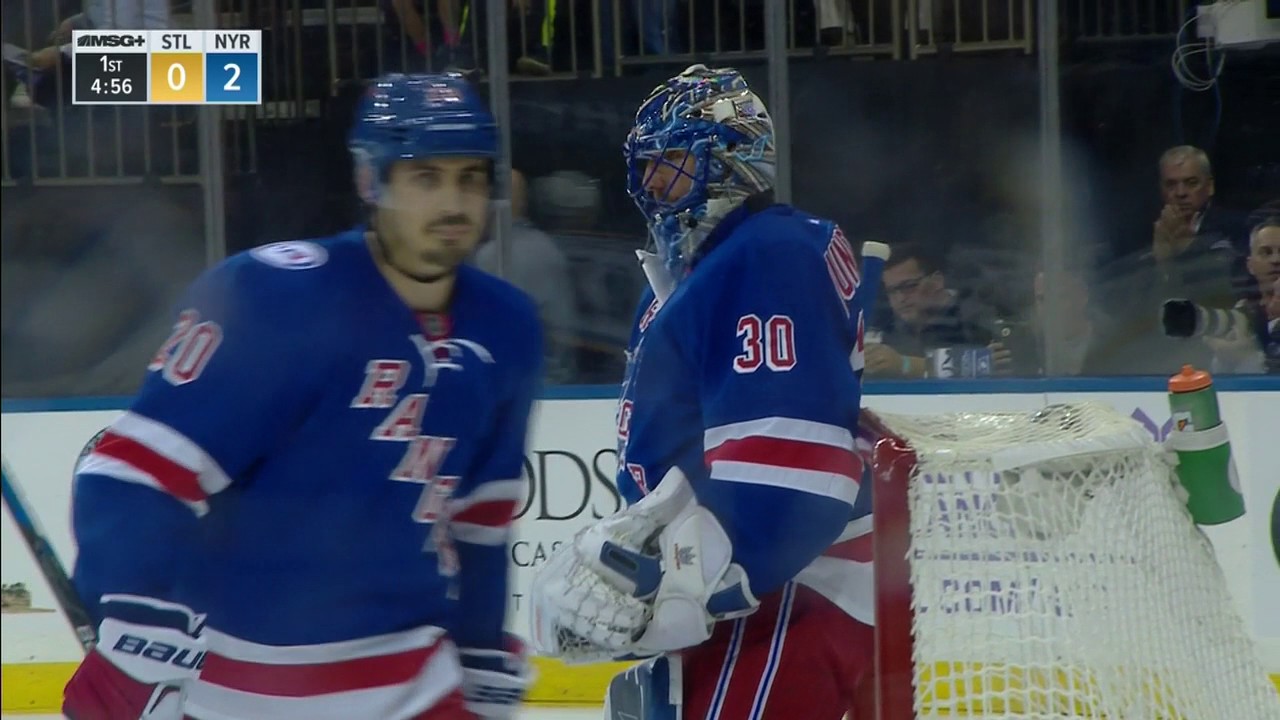 As an experienced goaltender, Lundqvist has been through many ups and downs in his career. When pertaining to consistency at the beginning of the season, he’s been known as one of the many goalies who have slow starts. With the offense being able to put up three, four, and five goals per game every time they step on the ice, the pressure is immediately lifted. Rangers fans know that Hank is best when the puck is not constantly close to his net and so far, through the first few weeks of the season, the Rangers have been able to be generally successful keeping shots away from Lundqvist.

Talented veterans like Derek Stepan and Rick Nash have been wonderful so far this year, but the beauty of this Rangers team so far is the insane production from the under-25-year-old’s on the roster. Jimmy Vesey, Kevin Hayes, and J.T. Miller all have over 10 points so far and it doesn’t stop there. Chris Kreider’s over a point-per-game, Mika Zibanejad has nine points and has been the trigger man on his line of the power play unit, and Brandon Pirri has four goals and three assists. Even Pavel Buchnevich has started to settle in, scoring a goal in each of his last two games.

Everything is clicking so far for the young forwards who have been absolutely spectacular as a group so far. That statement also proves true for Adam Clendening and Brady Skjei. Through five games played, Clendening has proved to be a solid option as a seventh defenseman. Skjei has also been great, appearing in all 13 games so far this year. In those 13 games, he has eight assists while playing shutdown defense in his own zone. The 22-year-old has blocked shots and has played extremely smart, safe hockey which can only help the team’s performance. The young players have all played their part so far in the Rangers success, showing they can keep a high level of hockey going for weeks at a time.

The Rangers’ schedule in November will likely reveal how good this team really is. Their next opponent is the struggling Vancouver Canucks before heading on the road to Western Canada to face the Calgary Flames, Edmonton Oilers, and Canucks over a four day span. They will then head to Columbus for a game against the Blue Jackets and just two days later, face Keith Yandle and the Florida Panthers. After two extremely important early season games against the Penguins, one in Pittsburgh and one in New York, the Rangers face the Flyers in Philadelphia and then play the Senators and Hurricanes in MSG to end their month.

With multiple perennial playoff teams over the next three weeks of hockey, the Rangers will need to prove that they can come out strong in back-to-back road games. Expect to see a lot of Lundqvist between the pipes over the next few weeks, as the Rangers attempt to keep up their offensive dominance as they travel through Canada and attempt to remain at the top of the Metropolitan Division.