The Ottawa Senators and the Columbus Blue Jackets faced off in the second of back-to-back nights for both teams. They met recently on Thursday, but this game played out very different. Instead of a 2-0 game that featuring solid goaltending performances, scoring began early and did not let up throughout the entire game. The teams traded the lead between them several times before taking it past regulation. The Blue Jackets secured the victory with a goal by Cam Atkinson.

Zack Smith took advantage of confusion beside the Columbus net and tucked the puck under Joonas Korpisalo to score 42 seconds in. Give credit to Mark Stone, who once again began a play by stick lifting a Columbus forward. 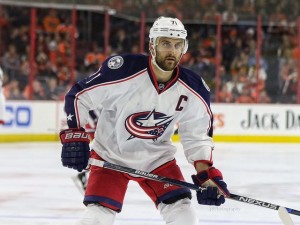 The Blue Jackets struck quickly after on a powerplay. Seth Jones knocked a clearing attempt out of the air before Alexander Wennberg took the puck. Wennberg passed it directly onto Nick Foligno’s blade who simply redirected the puck into an open net.

Four-on-four play after opened play up early. The teams went back and forth with pace, and they both got a partial break each during the two minutes.

Smith got his second goal of the game while battling with a defenceman in front. He redirected Cody Ceci’s shot towards the net to put the Senators up 2-1. Curtis Lazar earned his first point of the season through a secondary assist when he delivered the puck to Ceci from the corner.

Wennberg made another great pass to set up a goal, as he sent the puck from the right of the Senators’ zone low in the corner to Scott Harrington to the left by the blueline. Harrington released a wrist shot and the puck made its way into the net for his first career NHL goal to tie the game 2-2. 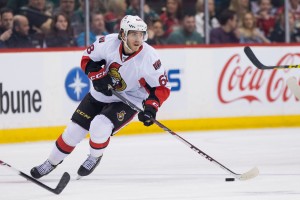 A quick powerplay for the Blue Jackets allowed them to gain their first lead of the game. A blocked shot deflected the puck right onto Zack Werenski’s stick and he delivered a quick shot to put it past Condon.

The Senators pushed the pace in the second, getting the bulk of the shots and scoring chances. Their pressure in the offensive zone reaped a reward, as Mike Hoffman scored with a one-time shot from the slot to tie the game.

They regained the lead, this time off the rush. Smith delivered the puck to Derick Brassard in the neutral zone. Brassard shot the puck on Korpisalo, who was far out of the net. The Blue Jackets goaltender kicked the puck right to Mark Stone, who banked it into the empty net.

The Senators’ dominance in the second resulted in another goal. Hoffman found some space in the middle of four Blue Jackets players. At the faceoff circle, he quickly released the puck past Korpisalo for his second of the game. With less than 20 seconds left in the period, the Senators extended their lead 5-3.

The game’s high-scoring continued its pace early in the period. Less than two minutes in the third, Lukas Sedlak received a pass from behind the Columbus blue line. He found himself on the partial breakaway and slid the puck past Condon’s legs to reduce Ottawa’s lead 5-4. The Blue Jackets did not let up, as soon after, Seth Jones’ point slapshot tipped off Matt Calvert’s stick to tie the game up.

Columbus suffered a huge loss, as Zack Werenski received a shot to the inside of his right foot. He was unable to put weight on it, he required help to get off the ice.

The Blue Jackets did not let that deter them, as they took the lead 6-5. Atkinson shot the puck that deflected off the skate and went high in the air. Condon went for the catch but missed his mark as the puck floated past his catching glove.

Kyle Turris tied the game up once again on the powerplay. His one-time slap shot, set up by Dion Phaneuf, made it through under Korpisalo’s arm. At 6-6, the two teams went to overtime to settle things.

A missed chance at one end converts into a goal at another. Karlsson’s shot missed the net and rang around the boards. Atkinson picked it up and went on the breakaway and made a move to score while tumbling into the net to win the game for the Blue Jackets 7-6.