At 12-3-0, the Dallas Stars are off to the best season start in franchise history. They’ve scored more goals than 28 of the 29 other teams in the National Hockey League. Jamie Benn and Tyler Seguin are two of the league’s three top scorers, while John Klingberg is the points leader among defensemen. Need a goal? Not a problem for these Stars. 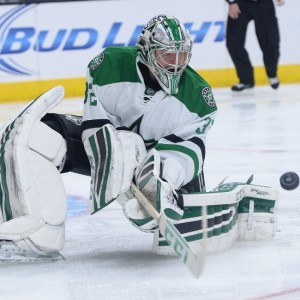 On the other side of the puck, Dallas still allows scoring chances, especially the high danger variety, at a rate which would be alarming for most other teams. So far, those scoring chances have been mitigated by the combination of high-powered offense and good (and occasionally great) goaltending. Fifteen games in, General Manager Jim Nill’s Two-Headed Goalie Experiment is working just fine. In twin 4-1 wins over Carolina and Detroit over the weekend, both of which were much closer than the final score indicates, Kari Lehtonen stopped 51 of 53 shots faced. As The Hockey Writers‘ own Derek Neumeier wrote, the Stars are firing on all cylinders. It’s a good thing, too, because the team returned home Sunday night from a successful four-game road trip, only to awaken Monday morning with the stark realization that this week will be their toughest yet.

If a week featuring three home games and no back-to-backs is your “toughest week yet,” you’ve had an easy schedule to this point. In the first fifteen games, Dallas feasted on the Eastern Conference, going 8-2-0 against them. They rolled through the struggling Pacific Division, adding another four wins. Their only loss to a Western Conference opponent was a 6-3 embarrassment at division rival Colorado in the second game of the season. There’s the rub: So far this season, the Stars have only played one game against a Central Division opponent, and they lost. Their struggles within the Central are well-documented. This week, they play two division rivals. Before those games, however, Dallas has to deal with a thorn in their (collective) side.

Tuesday, November 10: The Leafs Must Fall

The Stars kick off their three-game homestand Tuesday night against the Toronto Maple Leafs. Last week, they lost to Toronto, 4-1, despite out-shooting them 44-26. The Stars have dropped three in a row to the otherwise-woeful Leafs, and haven’t won a game at the Air Canada Centre since the 2008-09 season. Their last win over Toronto came in Dallas almost two years ago, in January 2014. Making matters worse, the rematch with the Maple Leafs will be the Stars’ first home game after a lengthy road trip. Dating back to last season, the Stars are 4-6-4 in the first game back in Big D after a road trip of two or more games. Recent history points to this game being much tougher than it should be for Dallas.

Thursday, November 12: Bennie vs. the Jets

Whether the Stars pass or fail Tuesday night’s Toronto test, they must immediately shake it off and prep for Thursday night, when the Winnipeg Jets come to town. Dallas struggled against Winnipeg last season, winning just one of four contests. As mentioned in a previous post, had the Stars gone 3-1-0 against the Jets, instead of 1-3-0, Dallas would’ve leapfrogged Winnipeg for the final playoff seed in the west. For the Jets, this will be the second game of a four-game road trip through the Central Division, so expect them to be ready for a battle. They’re a talented team, featuring the likes of Dustin Byfuglien, Blake Wheeler and a rookie named Nikolaj Ehlers, who can do this with the puck:

The Stars cap off the week Saturday night against the Minnesota Wild, who currently occupy third place in the Central. Just six points behind Dallas, Minnesota also has two games in hand, so a Wild win would close the standings gap considerably. If that’s not motivation enough for the Stars, they can draw on Minnesota’s snub of Dallas as an opponent for their outdoor Stadium Series game in February. Hey, whatever works, right?

Since the start of the 2014-15 season, the Stars are 4-6-4 in the first game back after a road trip of two or more games. They’ve dropped three straight to Toronto, dating back to the fall of 2014. They went 1-3-0 against Winnipeg and 1-3-1 against Minnesota in 2014-15. The Dallas Stars are off to the best start in franchise history, but how much have they really changed since last season? We’re about to find out.