Among his travels during the 2016-17 campaign, defenseman Reilly Walsh dressed for 24 regular-season matches for the eventual Clark Cup-champion Chicago Steel. He also appeared in 30 games for Proctor Academy of the USHS, a destination he dominated with 30 goals among 69 points. 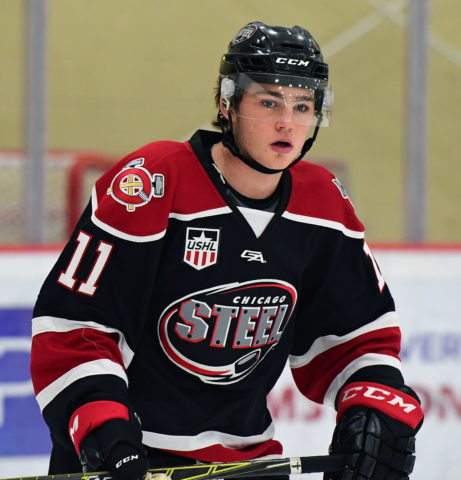 Known for his flashy skating, Walsh is undersized and will need to hit the weight room to add muscle to his frame to remain competitive in the upper levels. An offensive-defenseman, Walsh has been concentrating on improving his defensive game in settings such as the 2016 U17 Five Nations Tournament. In the finale, he scored two goals and finished the tourney as one only two Team USA defenders to earn a plus rating.

The son of former NHLer Mike Walsh, the younger Walsh possesses a skating stride that allows him to recover swiftly. Under his father’s tutelage at Proctor, Walsh learned to play a solid positional game. He is able to change a game’s pace to disrupt opponents’ rhythm. Generating speed over his first few glides, he shifts speeds effectively to make up ground laterally.

Walsh began his USHL career with the Tri-City Storm and was traded to the Steel in May 2016. He is committed to play at Harvard and is expected to make the jump to the college level next season.

If an organization intends to use the 2017 NHL Draft to inject additional offense from the blueline, Walsh could provide it with an early- to mid-round selection. Walsh’s size is a concern but it likely will be trumped by his skating ability and offensive touch. He could be picked as high as the second round.

“The more you work and the harder you work in the summer increases your chances of success in the season.” – Reilly Walsh on his off-season workouts

“Possibly the best Eastern Prep school prospect in the class, he is a bit undersized, but no one can deny his superb skating and offensive talent.” – Bill Placzek, www.draftsite.com

Coached by his father at the prep level, Reilly Walsh learned the game’s idiosyncrasies from a veteran AHL skater. The younger Walsh is a fundamentally-sound player who could develop into a top-6 NHL defenseman after he gains additional experience and bulk.

Walsh was named to the 2016-17 USHS All-USA Hockey Second Team. He competed at the 2016 Ivan Hlinka Memorial Tournament. He also participated in the 2016 USA Hockey/CCM All-American Prospects Game.