Welcome aboard, Ryan Johansen. You’re the newest member of the Ryan Kesler fan club — a growing list of NHL players that spend three hours opposing him only to come away agitated. It’s a script we’ve seen before.

The two players spent much of the Anaheim Ducks‘ Game 2 victory on Sunday night in a back-and-forth jousting match. It started before the puck even hit the ice, as Kesler jabbed Johansen with his stick directly preceding the opening face-off. That set the tone. As the game wore on, Johansen high-sticked Kesler in the face. Kesler landed an elbow to Johansen’s head. The two continued to tussle. After the contest concluded, Johansen was none too pleased.

“I play the game hard, and obviously he doesn’t like that” – postgame Sportsnet interview.

Love him or hate him, you probably have an opinion. He agitates, frustrates and plays with an edge. At times, he’s over the edge. If it’s against your team, you likely can’t stand it. If your team isn’t on the receiving end, it’s entertaining. And Kesler is not just an agitator. He’s a terrific two-way hockey player, winning the Selke Trophy in 2011 and receiving five total nominations for the award, including being a finalist in 2016-17.

As we anticipate Game 3 between the Anaheim Ducks and Nashville Predators on Tuesday night, we may realize we’re being treated to a playoff series of vintage Kesler. For one of the NHL’s most polarizing players, his reputation, as evidenced by some of his most memorable combatants, is earned.

Perhaps no individual can relate to Johansen’s complaint more than Jonathan Toews. Kesler and Toews went head-to-head in three straight playoff series from 2009 to 2011, with each series lasting six games. The two reunited in an outstanding seven-game Western Conference Final in 2015.

Toews, as one of the league’s top two-way centers, and the Chicago Blackhawks generally emerged from those showdowns with the upper hand, winning two out of three against Kesler’s Vancouver Canucks as well as the 2015 series against Anaheim. 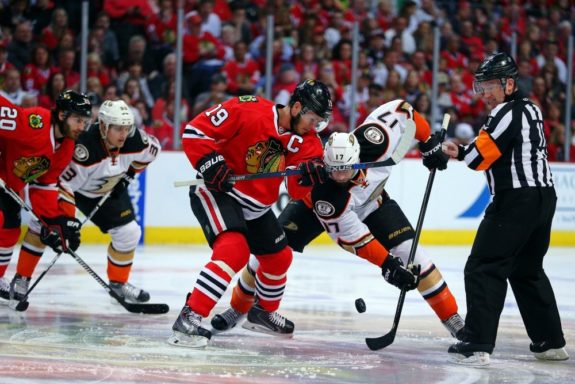 But, Kesler and his team had their moments. After the Canucks exercised their demons against the Blackhawks in the 2011 Western Conference Quarterfinals, in which the Canucks had to hold off the Blackhawks in Game 7 after they rallied from a 3-0 series deficit, the victory had more meaning:

“At the end of the day, after all is said and done, it’s extra special with the history we have with these guys to get a little payback,” said a smiling Kesler, who was dynamic in Tuesday night’s 2-1 overtime thriller. “It definitely feels really good.” – Pierre LeBrun’s April 27, 2011 column for ESPN

The two competitors, with what seemed equal parts dislike and respect, renewed their rivalry in 2015. The Ducks physically punished the Blackhawks throughout much of that series, who took their lumps but found success at the critical moments. The often-antagonistic Kesler was a bit perplexed by the Ducks’ inability to wear Chicago down, which was clearly Anaheim’s plan. Kesler’s quotes encapsulate that sentiment:

“When you get guys playing a ton of minutes, it’s gonna wear them down,” Kesler said. “We’ve got to invest in them physically.” – Kesler via NBC Sports on May 17, 2015

While the strategy proved unsuccessful, Ryan Kesler did bring Toews to do something you rarely see from Captain Serious — drop the gloves.

Perhaps there is still another chapter to be written in this individual rivalry. But if that book is closed, it’s already left its mark in hockey history. Just walk down Madison Street in Chicago and ask Blackhawks fans what they think of Ryan Kesler. The praises will surely be few and far between.

If you were wondering whether the opposition’s size was a deterrent to Kesler, let his 2008 incident with Chris Pronger be the answer.

In Kesler fashion, he fell down at Pronger’s feet after finishing a check on the then-Anaheim defenseman and trapped his leg, not allowing him to break free and pursue the play. Irritated, Pronger had none of it, stomping on Kesler’s calf with his skate blade, an action that would earn Pronger an eight-game suspension.

Evidence that Kesler has been up to his agitating tricks for more than a decade, Boulerice was handed a 25-game suspension for the incident. That was tied for the longest suspension in NHL history at the time, matching a suspension given to the New York Islanders’ Chris Simon during the previous season for swinging his stick at the face of Ryan Hollweg of the New York Rangers.

This one’s for you, Preds fans. If you’re sitting at home stewing over Kesler’s antics, remember that what goes around comes around. Max Domi, whose bloodline includes notorious tough guy Tie Domi, delivered a knock-down punch to Kesler during a game earlier this year after he took a run at Arizona Coyotes defenseman Jakob Chychrun.