In order to prevent a game or series from derailing, teams need to be able to overcome the occasional soft goal, defensive lapse or ineffective power play. Although there are outlier cases such as Ron Hextall in 1987, Patrick Roy in 1993 and Jean-Sebastien Giguere in 2003, rarely will a goalie carry a team in the playoffs. Note that all three examples won the Conn Smythe Trophy, but only one — Roy in 1993 — actually won the Cup. The reason is the rest of the team was over-matched and could not counter what the competition brought when it mattered most. 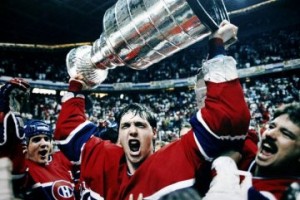 Patrick Roy is one of the rare goalies that managed to lead teams to titles despite their deficiencies.

The Blues experimented with bringing in Ryan Miller at the 2014 trade deadline. Although it seemed on the surface like a shrewd and aggressive move at the time, many fans recalled that Miller hadn’t won a playoff series since 2008, and failed to lead a President’s Trophy team past the second round in 2006. Once injuries to the Blues began to mount at the end of the 2014 regular season, it became increasingly clear that even a top-flight keeper couldn’t mend all of the team’s wounds. After leaping out to an undefeated start, the losses began to mount and the troubles continues into the playoffs. Although the Blues jumped out to a 2-0 lead against the hated Blackhawks, Miller still surrendered three goals in each game. The issue isn’t Miller’s struggles; rather, it’s the idea that some franchises — and the Blues are notorious for this — assume that by bringing in the stud goalie, all other issues are painted over and all will end well.

It rarely works that way.

The saga began in the current era when Jaroslav Halak, the hero of the Canadien’s unlikey dispatching of the Washington Capitals and Pittsburgh Penguins in the 2010 playoffs, was brought in. Although the team did in fact have a legitimate need to replace departing goalie Chris Mason after a contract impasse, the expectations were clear — he was the guy to solve the team’s problems and lead the team to glory. Never mind that two years prior was the first time in five years the team even made the playoffs, coming off of a post-lockout rebuild. Halak’s injury struggles and apparent confidence issues meant that even a guy compared to All-Star Carey Price at the time wasn’t good enough for various reasons. This was proven when a healthy and motivated Halak was shipped to Buffalo as part of the Ryan Miller trade.

Jaroslav Halak never had a chance to shine for the Blues in the postseason. (Cheryl Adams – HockeyBroad/Flickr)

Armstrong had this epiphany quoted by Miller’s agent, former Blue Mike Liut when he said, “The Blues were unwilling to wait until July to sign Ryan. St. Louis initially made overtures to sign Ryan, but were not confident that they could get this done prior to July and in the meantime need to address other concerns.” To many, those “other concerns” are defined as the glaring offensive holes that routinely fail to pot the timely goals, and a defense that has troubles keeping up with hard forechecking such as that displayed by the Blackhawks in round one. Shortly thereafter, veteran team player Brian Elliott was re-signed to a three-year deal in the $7 million range, a figure Miller is rumored to be asking per annum. In studying Elliott’s playoff numbers with the Blues (5-8, 2.13 GAA, .911 Sa%), the problem clearly is not necessarily in goal. It is well-documented the number of missed opportunities in the two playoff series manned by Elliott, but what is remembered is the late second period goal in Game 6 by Dustin Penner in the 2013 playoffs. If the Blues had buried only two of the numerous open nets offered up by Johnathan Quick, the series would have taken a dramatic turn in the Blues’ favor. As it happened — and in typical Blues fashion — the lack of timely offensive output led to the assumption than our goaltending couldn’t get it done. Acquiring Miller was discussed long before it actually happened, and where there’s smoke there’s fire. Although Blues fans hate to give credit to that team up north, the Blackhawks showed immense patience with Corey Crawford, despite an early exit in 2011 after winning the Cup the year before. This was rewarded in 2013 with another championship and  another Western Conference Final appearance thus far in 2014.

Letting a young goalie mature while improving the rest of the team rewarded the Blackhawks. (Greg M. Cooper-USA TODAY Sports)

As the Blues march into the 2014-2015 campaign, they will be led by Elliott and rookie Jake Allen, a promising prospect that played a large role in salvaging the 4th seed for the Blues in 2013. Armstrong has already stated that each goalie will be “earning starts,” a statement a GM makes when he’s hesitant to name a number one goalie. Hopefully both Elliott and Allen can block out the pressure instilled by fans and management that fail to understand that the goaltending position, while arguably the most important, is rarely the sole thing that leads teams to the chalice. In the meantime, Ryan Miller in the meantime will earn a huge payday, probably from another franchise that thinks by adding him early playoff exits will be a thing of the past.