With the San Jose Sharks days away from their Oct. 3 season opener, we continue our season preview. We’ve covered the team’s pre-Erik Karlsson trade roster, our expectations for divisional opponents, the Sharks’ greatest vulnerability and the team’s X-factors. I’ve taken a look at important side effects of the Karlsson trade and my colleague, Mac Bass, offered his take on the deal as well. We’re onto the third article on key statistics for Sharks head coach Peter DeBoer to consider. The first covered important goalie results and how they relate to Stanley Cup winners. The second focused on a plan for Joe Thornton, given his play and health.

Last season, the Sharks finished with the league’s best special teams, a combined plus-24. This, despite an abysmal power play for a major chunk of the season. The primary reason for their success was the penalty kill, which allowed 26 goals net, five better than second place and eight better than third. As we look at optimizing the Sharks’ incredibly talented defensive group, it makes sense to start with the area where the Sharks led the league last season.

Our final statistics article, as with the prior ones, will combine a number of stats around a specific theme, then use them to create a plan. I’ll look at each starting defenseman, beginning with their penalty killing, and determine some unexpected results. For DeBoer, the penalty kill was among the team’s most underappreciated assets last season.

It is typical for players to be about minus-1 for every 10 minutes of penalty killing time (abbreviated as -1.00/10mPKTOI; in this article I use only 4-on-5 situations). The league’s top 10 penalty killers, by ice time, were a composite minus-0.94/10mPKTOI (eight of the 10 were from playoff teams, i.e. quality players). Now that we know what is typical, we can see how the Sharks defense measures up.

The numbers indicate that Brent Burns is excellent on the penalty kill, though few seem to notice. He is minus-0.68/10mPKTOI over the past three seasons while playing extensive minutes. This is a ‘top-10 in the league’ type of number.

While many criticize Burns’ defensive play, playing shorthanded emphasizes his strengths here. There are fewer transition plays, and fewer picks and switches. Instead, he gets to use his reach and strength. His reach can keep play out on the perimeter and close off inside passing lanes. His strength comes into play when he is outnumbered battling for the puck along the boards. Burns’ ability to get to a loose or bobbled puck and flick it down the ice does little good at even strength but it’s a darn nice ability for a penalty killer.

He is expected to partner with Joakim Ryan, so we’ll look at Ryan’s penalty killing prowess next. There are few plus-players on the penalty kill. Only 13 players finished with a plus rating (six defensemen) last season, and 10 of the 13 were plus-1, two were plus-2. The league leader was plus-3, Ryan.

A plus-3 rating on the power play has ‘fluky’ written all over it. But what if it isn’t a fluke? What if Ryan is genuinely good on the penalty kill? The sample size is minuscule but encouraging. Ryan and Burns might be a better penalty killing duo than the pairing the Sharks rely on most heavily, Marc-Edouard Vlasic and Justin Braun.

I’d like to see the Burns-Ryan duo become the Sharks’ top penalty killers. At least give them a nice long test drive during the season. If it works, there’s a great opportunity to further improve an area of strength. If it fails, I don’t expect it will be by much and the team can always revert to the Vlasic-Braun pairing.

So if Burns and Ryan are the top penalty killers, who comes next? In this case, I’m going with the pairing of Braun and Brenden Dillon. As terrific as Burns’ numbers are, Dillon’s are better. His -0.44/10mPKTOI over the last three seasons is exceptional (I’ve posted the numbers for each Sharks defenseman in Zeke’s Notes at the end of the article).

When I culled the data, Burns and Dillon constantly showed up among the best penalty killers. Of 116 defensemen (those with over 100 minutes of penalty killing ice time) last season, Dillon had the top Corsi% and Burns was seventh. Dillon was fifth in Fenwick%, Burns 15th. Burns was first in ‘goals for percentage’. Stat after stat validates their penalty killing excellence and it’s not just last year. In 2015-16, Dillon finished second in GA/60 among the 186 players who played at least 50 minutes of penalty kill time that season. These guys are good. 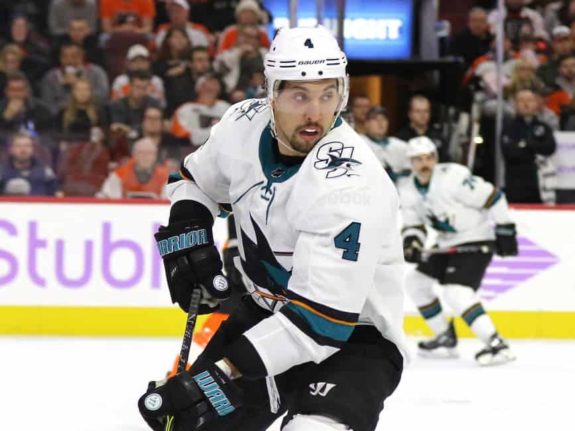 Braun, who (it appears) will partner with Dillon to start the season, has put up respectable penalty killing numbers, essentially the same as Vlasic and the top ten ice time group mentioned earlier. Keeping the Braun-Dillon pairing together on the penalty kill is a natural place to start. I’d only use the Erik Karlsson-Vlasic pairing towards the end of the penalty kill, so the team can transition effectively to 5-on-5 play with their best even strength pairing on the ice.

This penalty killing approach plays to the player’s strengths. Now, I’ll do the same for the power play, and this one is much easier.

In team practices, Burns and Karlsson participated together on the top power-play unit. I like this pairning and I’d even double down by double-shifting them. How much power play time do I want for Burns and Karlsson together? All of it. DeBoer double-shifted Burns late last season. I liked it then, I like it even more now, and so does former Sharks broadcaster Drew Remenda (at the 26 minute mark).

‘All of it’ might be too much, but 90+ seconds of a two-minute minor isn’t. Towards the end of a power play, perhaps the final 15 seconds or so, I’d insert Vlasic and Braun, allowing the team to transition to 5-on-5 responsibly while not giving up on the waning moments of the power play. This gives Karlsson and Burns a breather and enables the pairings to reset.

Now we’ll look at even strength minutes. The better plus-minus players get relatively more ice time. I say relatively because Dylan DeMelo and his 14 minutes of ice time per game have departed while Erik Karlsson and his 27 minutes has arrived. Obviously, not everyone gets the ice time they had before.

Here, Vlasic, the team’s best even-strength defenseman, has his even-strength ice time increase a shade and it’s tops among the group. He also drops most of his penalty-killing time. Burns, with his team-worst minus-16 rating from last season, has his even-strength ice time drop by four minutes but he adds an additional minute of special teams play. Ryan, the reigning NHL champ in penalty kill plus-minus, has a major bump in his penalty killing ice time. Karlsson also sees a bump in power play time, but like Burns, has a four-minute drop in even strength ice time. Dillon and Braun have their ice time drop, a function of the remarkable talent ahead of them not because of their ability.

I have it like this, assuming five minutes each of PK and PP per game. 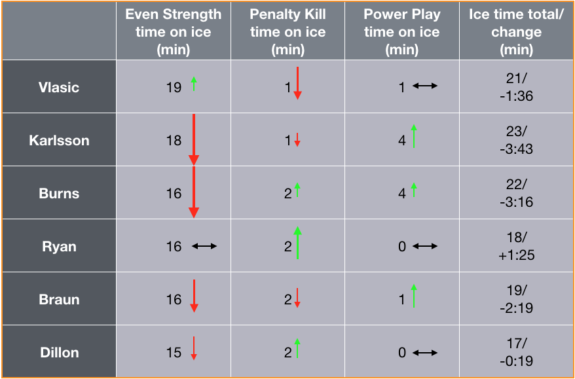 A few other considerations went into this. As I noted, the blue line has too much talent for the minutes allotted to it. Ryan has proven himself at both 5-on-5 (he led the Sharks in plus-minus) and on the penalty kill. There is no reason for Ryan, now 25, to play modest minutes. DeBoer can stop benching him in the third period as he did often last season. Ryan’s got a big job ahead of him and he looks ready for a bigger role, but there are only 18 minutes available to him in this analysis, largely because of the reduced even-strength ice time for his partner.

It’s worth noting, Burns has fallen off late in each of the past two seasons, something DeBoer hopefully noticed as well. In 2016-17, his play nose-dived beginning in March. In 2017-18, he was hurting, something DeBoer gave a vague description of after the season ended. Cutting back on Burns’ ice time could help him finish the season stronger.

Dillon and Braun are each capable of 20+ minutes on what would be the second pairing for most teams. I allocated them the same even strength time as Burns and Ryan, and it’s still too little given their abilities. 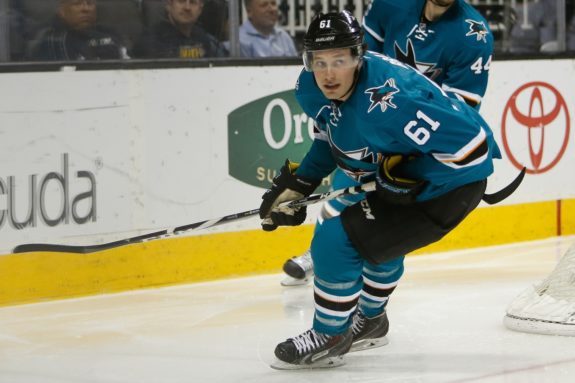 The Sharks have an amazing group of blueliners but it isn’t obvious how best to deploy them. DeBoer must craft a plan around their talents and the statistics used here provides a guide. On just about any other NHL team, the players would have more ice time than they’ll get in San Jose. All in all, this plan fits the team nicely. In every way and for each player, it accentuates the areas in which these players have demonstrated their strengths and cuts back on areas of weakness.

• Ideally, I favor Karlsson partnering with Brenden Dillon at even strength and keeping the long-standing Vlasic-Braun duo together, but the plan has one (not so minor) flaw. The Sharks want Karlsson signed to a long-term deal and giving him an elite partner help with that. If I’m Karlsson and my long-term playing partner matters, to borrow from Jerry McGuire, “You had me at Vlasic.”

• I mentioned the penalty kill plus-minus in the article and the figure of merit of minus-1.00/10mPKTOI.

So how do all the Sharks penalty killers match up against this figure? I’ve taken the composite numbers for the last three seasons (except Ryan, who only has one NHL season under his belt). Each defender has over 250 minutes of penalty killing time (again, except for Ryan). And it’s worth noting, these numbers were reasonably stable, year-to-year.

The recently departed Dylan DeMelo spent little time on the penalty kill, so his departure has little influence on the penalty killing defensemen. His numbers, which I didn’t include here, indicate that it was a good idea to keep him off the unit. The one departure that will hurt the Sharks’ penalty kill is Chris Tierney, who was very good and very prominent; he led the team in short-handed ice time among the forwards.