We’re up to Part 3 of our season review of the San Jose Sharks. The prior articles are below for those needing to catch up.

As strange as this sounds to Sharks fans, the strength of this team happens to be the defense. The Sharks, at their best, were an excellent defensive team, among the best in hockey in goals against per game (fifth-best) and shots allowed per game (third-best). The blue line starters consisted of veteran players; all have played at least 360 regular seasons games and at least 26 playoff games. Brenden Dillon, age 26, is the only one who won’t be at least 30 by the start of next season.

Defense is a team game, so it would be wrong to attribute the Shark defensive effectiveness solely to the defensemen, but they played a major role. Excluding a miserable five-game stretch in late March when they allowed 25 goals, the Sharks allowed only 175 goals in 77 games, a very stingy 2.27 per game.

In terms of talent, the Sharks’ defensive group is among the very best in hockey. It has a top scorer, a shut-down defender, solid veterans and not much in the way of easily exploited weaknesses. The Sharks led the NHL in goals by defensemen with 49; 39 came at even strength, also a league best. Only one defenseman finished the season as a minus player, and just barely, at minus-2.

In the article covering the forwards, I discussed coach Peter DeBoer’s frequent use of the line blender. On the defensive side, the opposite approach prevailed, as the defensive pairs were very stable.

Ever since Brent Burns turned his defensive game around, he’s been the best defenseman in hockey. He’s paired with Paul Martin, an ideal complimentary player.

For three-quarters of the season, the pair was dominant. More specifically, Burns was dominant, arguably the best player in hockey. He was pouring in even-strength points and scoring goals at a pace not seen (by defensemen) in decades. And while many (myself included) had been critical of Burns’ defense, he was quite good in the second half of last season. This major improvement carried over deep into this season.

The collapse came in March. Whether it was injury or fatigue, Burns’ effectiveness came to a screeching stop. His last strong game came on his birthday on March 9, when he toyed with the Washington Capitals. Perhaps he had a birthday cake made from kryptonite (or whatever the equivalent is for a Wookiee).

What happened next wasn’t good. The numbers tell the story. Burns played all 88 games this season (including six playoff games). Breaking it down into four quarters of 22 games, his sequential quarterly point total was 20, 25, 27 and…nine. 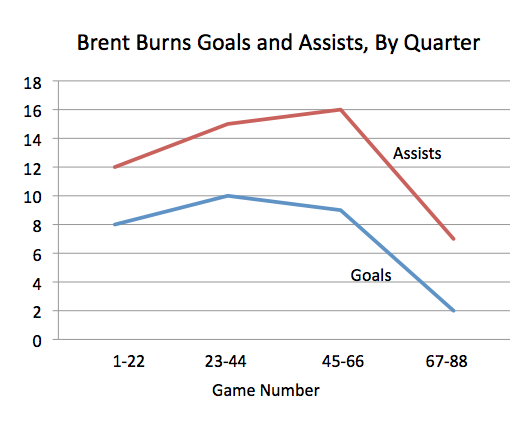 Plus-minus showed a similar downward trend, going from solidly plus for three-quarters of the season to significantly minus in the season’s final quarter. 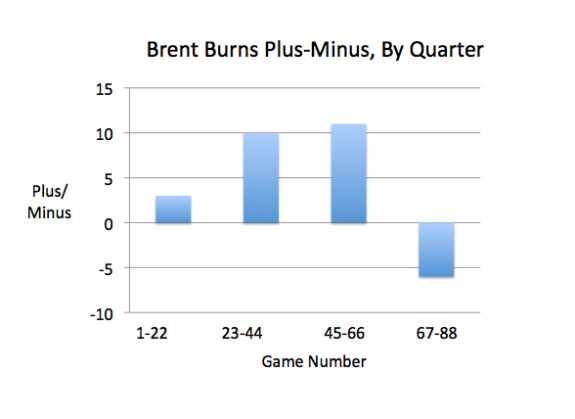 Burns led all NHL defensemen in ice time, counting all regular season and playoff games, since the start of the 2015-16 season. If it was fatigue, it was understandable. An undisclosed injury may have played a role, but I’m more skeptical of this explanation. Mental fatigue was an issue. The sorts of mistakes Burns had largely eliminated from his game beginning in January 2016 reappeared in March 2017.

Burns was announced as a finalist for the Norris Trophy, the award for the league’s best defenseman, for the second straight season. He deserves to win it, even with his sputtering finish. Burns is also a finalist for the Ted Lindsay Award as the most outstanding player. He won’t win this, but it’s still heady company.

At even strength, the Sharks were more than a goal better than their opponents with Burns on the ice (per 60 minutes of ice time). Burns and Couture were the only Sharks to have a differential above plus-1.00 (calculated as GF/60 minus GA/60).

During the season, Burns signed an eight-year, $64 million deal, the largest in Sharks history.

Thirty-six-year-old Paul Martin, playing alongside Burns, had an adequate season. He didn’t slow Burns down when the big guy was on fire, but when Burns did slow, Martin couldn’t pick up the slack. Through 66 games, Martin was plus-15. He was minus-5 after that, mimicking Burns’ rise and fall. Martin finished third among Sharks defensemen with 26 points, good for eighth on the team. Martin also played a lot over the past two seasons. He played 190 of the Sharks’ 194 games, the most he’s played in a two-season stretch in his career. Whether it was wise for a player his age to play this much is another question. There were times when Martin struggled to keep up.

The Sharks’ second defensive pair consisted of long-time partners Marc-Edouard Vlasic and Justin Braun. Both had seasons below their historic norms, though the bar is very high when it comes to this pairing. They were down, but still effective.

Vlasic took a puck to the face in the closing seconds of the game against Philadelphia on Dec. 30. While he was back in the lineup on Jan. 10, he wasn’t the same player for about the next six weeks. He wore an extended-length face shield through the end of the season, suggesting the injury included at least one facial fracture.

Vlasic finished the season with 28 points and was plus-4, a major drop from his 39-point, plus-15 the season before. This was his lowest plus-minus in the past nine seasons (he’d averaged plus-19 in the past three seasons). However, Vlasic did play effectively in the playoffs against phenom Connor McDavid, considerably slowing down the top candidate for the league’s most valuable player award. Due to his rare ability to slow down elite offensive players, Vlasic remains an extremely valuable player.

Braun, like Vlasic, saw a tumble in his output. He finished with just 13 points (the lowest points-per-game of his career), a 10-point drop from the prior season. He was plus-1 this season after posting a plus-11 rating last season (and an average of plus-13 over the last three seasons).

While the numbers and the eyes showed a drop-off, the pair often played against other teams’ best, and still tipped the ice for San Jose.

For most of the season, the third pair consisted of Brenden Dillon and David Schlemko. Dillon, statistically, had a down season, notably his plus-minus going from plus-8 last season to minus-2 this season. The eyeball test was more favorable, as Dillon skated more effectively. Last season, Dillon had several partners, finishing the season with fellow slow-mover Roman Polak. While the big defensive pair worked in most playoff series last season, their inability to exit their own zone was costly against Pittsburgh in the Stanley Cup Final. Exit Polak and enter Schlemko, a free-agent signing in the offseason.

Schlemko, a puck mover with an offensive game, was a solid complement to Dillon. Schlemko delivered 18 points and was plus-2. He missed 20 games over the season, most due to injury, but a few appeared to be a coach’s decision.

Dillon and Schlemko were the two best Sharks defensemen an even strength GA/60 (1.84). They may not have created much offense, but they didn’t give up much defensively. The pair had a good series against Edmonton, save for one terrible turnover by Schlemko which turned into the lone goal in Game 3’s 1-0 loss.

Dylan DeMelo was the Sharks’ seventh defenseman for the second consecutive season. He only played in 25 games, down from 45 last season. He was also was effective, with eight points (all at even strength) and a plus-2 rating, both improvements over last season when he had two goals and two assists, all on the power play. DeMelo scored his first career even-strength goal against Anaheim. As was the case last season, DeMelo did not appear in the playoffs.

Two other defensemen played for the Sharks, Tim Heed and Mirco Mueller. Mueller, the Sharks’ top draft pick in 2013, still doesn’t look the NHL part (he just turned 22, so there is time for him). He had two points and was plus-2 in four games. Heed managed a single game for the Sharks. As pending free agents, both Heed (UFA) and Mueller (RFA) could leave San Jose after the season. Heed, in particular, had a strong season for the AHL San Jose Barracuda. At age 26, expect him to look for an NHL job next season, and there are easier rosters to find a spot than with San Jose.

The Sharks’ defensive group was very good. Over the season, it was the strength of the team. Only a few teams have comparable quality at the position (Nashville comes to mind). The group was elite offensively and defensively. Much of it was Brent Burns. When he was great, the defense was great. When Burns struggled, the defense was still pretty good.

Stability was a major element with the defensive group. At times, typically when trailing in the third period, DeBoer would pair Vlasic with Burns to get his best defensemen on the ice together. This was the lone change DeBoer made with any regularity. The six starters only missed a combined 30 games (20 by Schlemko), all in the regular season.

The upcoming expansion draft, where Vegas selects a player from each NHL team, is likely to impact the Sharks’ defensive group. During the season, I suggested the Sharks consider trading Braun. One of the more difficult calls for general manager Doug Wilson this offseason is whether to protect Braun in the upcoming expansion draft. Trading him would have returned a meaningful asset. Now they risk losing him without compensation.