The games between the San Jose Sharks and Winnipeg Jets are sometimes referred to as the NHL’s version of West Side Story. The movie musical featured rival gangs named the Sharks and Jets. And like the movie, the latest contest between the Sharks and Jets provided drama, plot twists, disagreements, villains, victims, pain and anxiety. And for good measure, even something resembling a dance move.

The Sharks’ 5-4 overtime loss to the Jets featured plenty of storylines. The Jets took a 3-0 lead in the opening period, but the Sharks battled back to tie the game at 3-3 in the second period. In the third, Winnipeg took the lead to make it 4-3, San Jose tied it at 4-4 to force overtime. The highlight-filled game had one storyline, however, which dominates the others.

Joe Thornton, affectionately known as Jumbo to a generation of Sharks fans, went down with a leg injury in the closing minute of regulation with the game tied at 4-4.

More will be learned over time, but here is what we know now, according to this tweet from the Sharks. Thornton “is likely out for several weeks with an MCL related injury on his right knee.” It was his left knee which suffered torn ligaments last season. Additional diagnostic testing is still to come.

Thornton was able to leave under his own power, even putting a bit of weight on the leg. The play happened near the Sharks bench and he immediately went to the locker room. The anxiety was palpable inside the Shark Tank.

Even with this update from the team, it is still unclear what Thornton’s future holds. Last season, he was out for just two weeks with partial ligament tears to both his MCL and ACL. Thornton is one tough hombre ­– “several weeks” means we aren’t talking about the best-case scenario people hoped for on Tuesday evening.

Much of the Sharks fate this season still rests on Thornton. Though he has taken a step back, he’s still an emotional leader and remains a productive player. He’s been lethal on the Sharks resurgent power play. Both elements came into play earlier in the evening.

With San Jose trailing 3-2, but on the power play, the feisty Thornton verbally sparred with Jets forward Bryan Little for a full minute. There was nothing subtle about it. The taunts, mostly from Thornton to Little, lasted up until the puck was ready to drop in the face-off circle to the right of Jets goalie Connor Hellebuyck. Following the puck drop, the Sharks were able to press the action and when the puck found its way to Thornton (not far from where he was yelling at Little moments earlier), he whipped a brilliant cross-ice pass to the tape of Chris Tierney, who blasted home the goal which tied the game at 3-3. In the understated and admiring words of Winnipeg announcer Dennis Beyak, “well, he can still pass the puck.”

The assist on Tierney’s goal is Thornton’s last assist for a while. He sits 12th on the all-time list, just two behind Mario Lemieux. A healthy Thornton likely gets to ninth all-time this season, passing Marcel Dionne (eight behind) and Gordie Howe (18 behind) in the process.

The Jets got off to a quick start, scoring on their first two shots. Both goals were aided by unfortunate (from San Jose’s perspective) bounces off skates. The opening goal deflected off the skate of Mathieu Perreault and into the net. On the second goal, the puck hit the skate of Sharks defenseman Marc-Edouard Vlasic and onto Joel Armia’s stick, who quickly put the puck past Aaron Dell.

Trailing 2-0, Sharks forward Tomas Hertl boarded Jets defenseman Dmitry Kulikov. Kulikov was slow to get up, left blood in the ice and missed the rest of the game. Hertl was given a five-minute major and was tossed from the game. Though San Jose got two minutes back from Jacob Trouba’s roughing penalty after the hit, it still left Winnipeg with three minutes of power play time. With the man advantage, a diving Little brilliantly tipped a Tyler Myers blast for the third Jets goal to make it a 3-0, just 12 minutes into the game.

The Sharks Battle Back

The Sharks struck back late in the opening period on a scrambling play. Nikolaj Ehlers, down on the ice in the low slot area, attempted to clear the puck up the middle. It went straight to the stick of Joe Pavelski, who wired a shot past Hellebuyck to close the gap to 3-1.

Logan Couture’s score made it 3-2. It was a thing of beauty, sort of. Couture took on two Jets’ defenders as he pushed towards the net. Not surprisingly, his intended effort didn’t go as planned. The puck, however, wound up near Couture’s feet as he was turning. He completed the turn, a full 360-degree spin, and somehow slipped the puck past Hellybuck to make it 3-2. 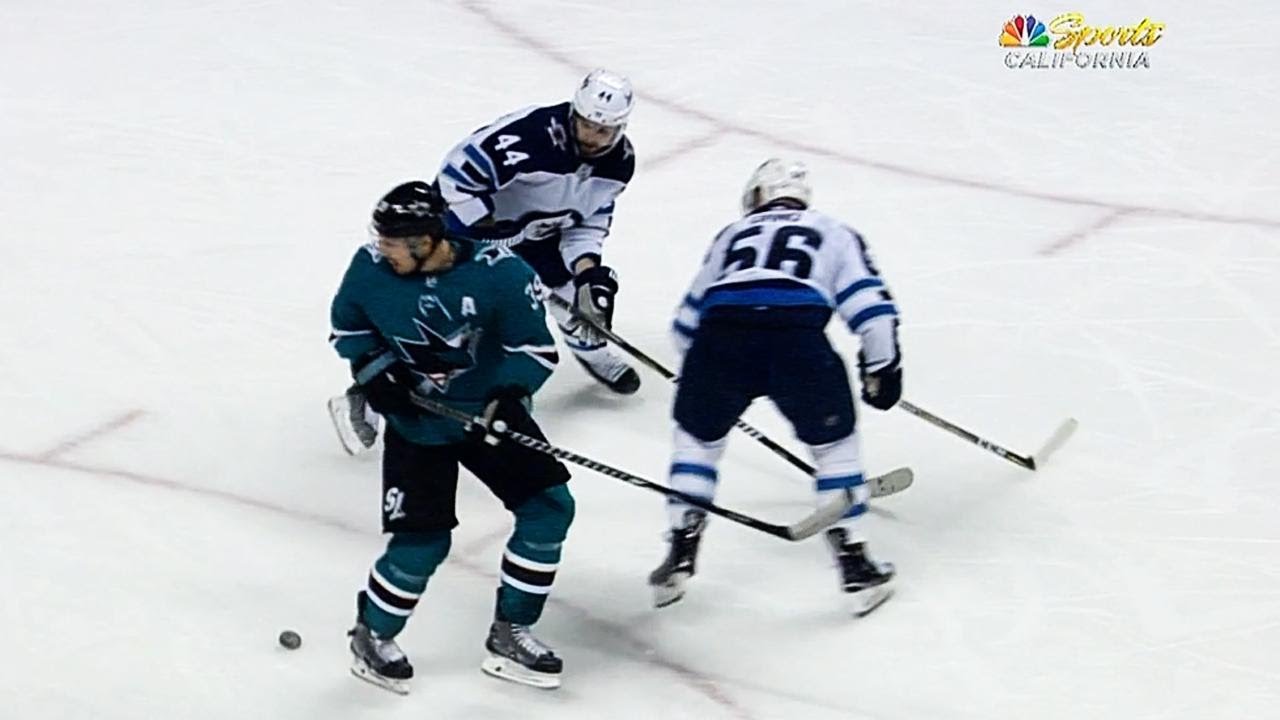 Some likened it to a figure skating move, making the call by Sharks television announcer Randy Hahn even better. Moments after the score, he used the term “spin-o-rama beauty” just at the camera panned on a Sharks fan cheering at the corner glass. This fan happens to be a master of beautiful spin moves, Olympic figure skating champion Kristi Yamaguchi. Hard to imagine Hahn’s call was anything other than spontaneous. Whether intentional or not, the net result was brilliant.

Four minutes later, the Sharks completed the comeback and tied the game. With Blake Wheeler off for high-sticking, Tierney’s power-play goal made it 3-3.

The Third Period and Overtime

Just past the midpoint of the period, Armia fired a shot which somehow went between the nearly closed legs of Sharks defenseman Joakim Ryan and beat a surprised Aaron Dell. But the Sharks showed resilience again. At the end of lengthy and dominating shift by San Jose, Timo Meier (the subject of our most recent article) won a puck battle in the low slot against big Dustin Byfuglien. Meier pushed his backhand shot past Hellebuyck to even the score with just over four minutes left. On the night, Meier drew three penalties against Winnipeg.

The game’s final minute wasn’t good to San Jose. It began with the injury to Thornton and ended just 18 seconds into overtime on Little’s second goal of the night. Byfuglien went behind the Sharks net, attempted a wraparound which went through the crease and onto Little’s stick. He tapped the puck home for the 5-4 Winnipeg win.

Though highly entertaining, it was often a ragged game, interspersed with moments of brilliance, including Little’s diving redirect on the Jets power play goal and Thornton’s seam pass on the Sharks power play. The Sharks were the better skating team and had far more high quality chances, including a half dozen breakaways and one-on-one chances with the goalie. Hellebuyck stopped them all.

For San Jose, the game was a great comeback, tempered somewhat by the disappointment of a garnering a single point instead of two. Then add to it the queasy feeling of being sucker-punched in the gut. There will be plenty more known and written about Thornton in the days ahead. The Sharks legend was playing his best hockey of the season; now his season is in jeopardy. And at age 38, perhaps his Sharks career is too. That queasy feeling isn’t going to go away anytime soon.

• Among the goings on at the game, several of the timeouts featured tributes to radio announcer Dan Rusanowsky for calling his 2,000th Sharks game earlier this month. Rusanowsky received a rousing ovation from the crowd.

• Speaking of streaks, one will end in the Sharks next game. The last time the Sharks played a game without either Thornton or Patrick Marleau in the line-up was sometime during the Truman administration. Just kidding, it happened twice in January 2004, with Jan. 21, 2004 being the most recent game. Since then, there’s been an uninterrupted span of 1,045 games with either Marleau or Thornton in the Sharks line-up. Add in 144 playoff games and the figure reaches an absurd 1,189 games. Those two games missed were the only times this occurred since Nov. 15, 2001, a span of 1,350 regular season and playoff games.

• The Sharks’ schedule has kept them moving. When they play the New York Rangers on Thursday, their last game before the All-Star break, it’ll be the Sharks first time playing consecutive games in the same venue since Dec. 28, four weeks ago.