The Stanley Cup is the NHL’s ultimate prize.   It’s too bad that, every spring, it gets welcomed by an overwhelming chorus of boos.

It’s not the Cup’s fault.  Everyone revels in its beauty, watching the light glisten off the carefully etched names of champions past. Lauded as the greatest trophy in all of professional sports, in person, the thirty-five pound chalice even exceeds expectations.

No, the Cup is fine.  The problem is the man who stands beside it: NHL Commissioner Gary Bettman. 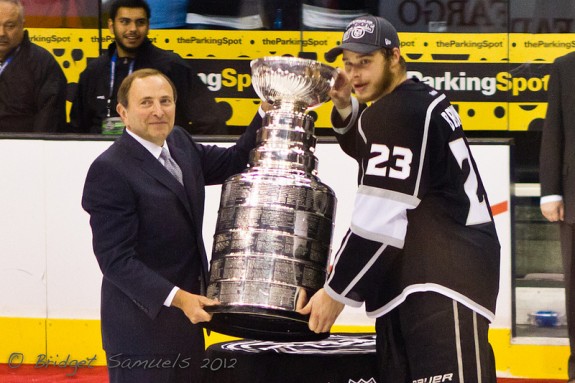 Upon his arrival into the league in 1993, Gary Bettman has handed off the Stanley Cup to its rightful victors each year.   Since then, the booing has only grown louder.

If Not Bettman, Then Who?

Why not let the previous champion hand the trophy over to the current winner?  It would be a metaphorical — almost literal — passing of the torch from one team to another.   But it won’t work.

This kind of hand off only makes sense when the current holder is no longer eligible to compete, like the Miss America Pageant. The current champion can’t win again, so it’s not awkward when they’re on stage to help present the latest winner.

Hockey is not a beauty pageant.

Just picture Dustin Brown handing the Stanley Cup to Jonathan Toews in 2013.  Awkward.  Plus, the booing could potentially be even louder than it would be for Bettman.  (Probably not. But it could be.)  Also, what happens when a Stanley Cup Champion repeats?  How exactly does one hand oneself a trophy?

The Most Recent Hall of Fame Class

If the league wants to honor its history as part of the Stanley Cup presentation, why not take a look at those recently inducted into the Hockey Hall of Fame?  The Class of 2013 is impressive, with inductees Chris Chelios, Scott Niedermayer, Brendan Shanahan, Geraldine Heaney and Fred Shero.

If the Rangers win the Cup in 2014, Shanahan would be a solid choice to present.  That is, assuming his current employers – the Toronto Maple Leafs – wouldn’t have an issue.  On the other hand, none of these inductees would work well with the Kings.  Chelios lives in California but works for the Red Wings. He also spent most of his career playing against the Kings in the Western Conference. Niedermayer won the Cup with the rival Ducks. Geraldine Heaney may have had to be the one to get the presentation nod with a Los Angeles victory.

Going back to the Chicago Blackhawks’ 2013 win, we’d be looking at a Hall of Fame class of Joe Sakic, Mats Sundin, Adam Oates, and Pavel Bure.  None of them would really fire up the crowd, at least not in a good way.

The league could have all four Hall of Famers present together, but you’d still have to expect fans to single out the rival players and boo them unceremoniously.    No, this doesn’t quite work.

That’s right, nobody.  Look at how former NHL President John Ziegler presented the trophy back in 1990.  He’s barely noticeable.  Why not have the Keepers of the Cup, Mike Bolt and Phil Pritchard, bring out the Stanley Cup and leave it on the table.  Let the Public Address guy have a moment of glory.  Last year, it would’ve been simple: “Ladies and gentlemen, the Stanley Cup!”  Cue the roaring applause. “Captain Jonathan Toews of the Chicago Blackhawks, come get the Stanley Cup!”

It’s nothing fancy, but it doesn’t need to be.  The trophy – and the moment – can hold their own out there.

The only thing that’s missing – and it’s one thing that the NHL loves to embrace – is a historical connection.

Retired Players from the Winning or Host Team

The Cup-winning Blackhawks of 2013 could have received the trophy from any of a long-standing list of great players, like Stan Mikita, Chris Chelios, or Bobby Hull.   With the presentation happening in Boston, they could have even used a legend who played for both teams, like Bobby Orr or Phil Esposito.

The 2014 Rangers and Kings could receive the hand-off from one of the many Hall of Famers who suited up for both clubs, including Wayne Gretzky, Marcel Dionne, Harry Howell, or Luc Robitaille.  Why not all four?

Yes, it might be another political game where the selection process is debated on who should present the Stanley Cup, but isn’t that an improvement over knowing that the Cup will be presented in front of a booing crowd?    Plus, these guys are Hall of Famers.  They’re legends.  Why not tie them into one of the greatest moments in their former team’s history by including them in the Stanley Cup presentation?

It’s time for Mr. Bettman to step aside. It’s best to let hockey fans’ hatred of their Commissioner no longer take away from the annual presentation of hockey’s grandest prize.  Instead of just handing out the Stanley Cup, Bettman should hand over the entire process.

Gary Bettman, please step away from the cup.