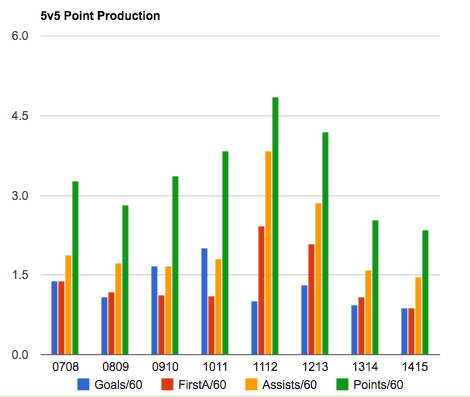 In the above graph, generated from stats.hockeyanalysis.com, we can see Sidney Crosby’s 5v5 Point Production throughout most of his career.  It seems to follow a fairly natural aging curve but what becomes a bit disconcerting, if you are a fan of Sidney Crosby or the Pittsburgh Penguins, is that in the current and last season his points per 60 minutes played have almost halved.

To the hockey analyst Sidney Crosby is just following the natural aging progression of forwards, most likely earlier than the casual fan would expect.  Let’s dig deeper into what this means.

One of the more well known studies on aging and scoring in forwards was conducted by ex-MIT Scientists and current Carolina Hurricanes Analyst Eric Tulsky.  In this study, using points-per-60 as a more reliable metric than points/game, Tulsky found that the average forward tends to peak around the age of 24 and they start to decline from there.

As coaches tend to trust older players, and experts in the NHL typically make correct decisions, we need to account for defensive play in forwards.  Tulsky analyzed this as well by reviewing the aging curves of shot attempt differentials for forwards.  While the shot attempt percentages seem to peak a bit later than scoring, the curve still follows the same trend.

A recent example of this decline in forwards comes from Rhys Jessop (@Thats_Offside) who demonstrated the decline in the once-elite Sedin twins.

So what does this mean in terms of Sidney Crosby and the original point production chart we showed at the beginning?  Here is Crosby’s scoring data in all seasons, since 2007-08, at at 5v5.

We can see the rise and fall of Crosby’s point production through the prime of his career.  Given he is a top end talent it is expected he is going to sustain a higher than average PDO.  We see his points/60 increase until he is 24-25 and from there it appears to be declining.  His On-Ice PDO is normal while his individual shooting percentage is the lowest in his career.

What is most interesting is that his points per 60 have dropped nearly in half.   To put that decline into context, if you take the average scoring rate of a first line forward (2.16 points/60) and that player were to see their production drop in half (1.08 points/60) they would be producing at a rate compared to a replacement level forward.

Because Crosby is such an elite talent, even when his production has dropped in half he still is one of the leading scorers in the league.  While his PDO is playing a role in the drop of production, there doesn’t seem to be any other obvious reasons what else could be affecting him other than age. 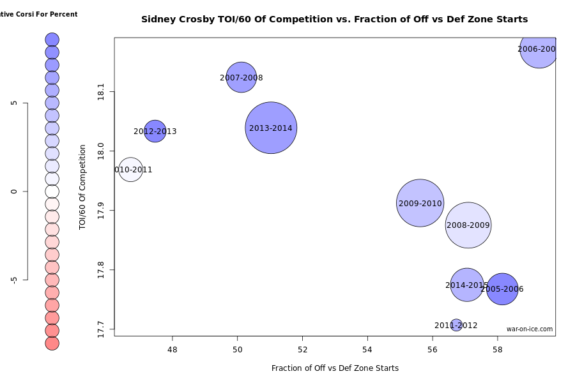 Looking at his usage across the years, thanks to War-On-Ice, Crosby has been shifted back into a usage that should be increasing his scoring.  He’s starting more often in the offensive zone while playing against weaker competition.  Through the prime of his career he was being used more as a shut-down two-way forward and was still able to out-produce the current iteration of Crosby.

Despite the easier usage, and accounting for PDO, Crosby’s production has clearly dropped with the most likely reason being his age.  Health could be a factor as Crosby missed significant time due to a concussion.  It’s too bad he missed the prime years of his life having to sit out of the game.  Because Crosby has been such a top end talent it is going to take people a lot longer to notice and acknowledge his decline.  He is still better than most players, and will continue that way for a short while, but expect Crosby to decline as the effects of age are now starting to show.