With the season coming to a rapid close, it’s a good time to take a look at each team and examine where each stands heading into the home stretch:

Philadelphia: The Flyers are in a bit of a rut right now, but have been the best team in the East (and consistently near the top of the NHL) all season. If the season ended today, they would still be the favorites.

Boston: As well as the Bruins are playing, I just don’t get the sense they are ready to win in the playoffs. Not sure why I feel this way, but I do. Maybe it’s the scars of following the Bruins since I was a kid. I must admit I used to feel this way about the Boston Red Sox pre-2004 as well.

Washington: The Capitals certainly have the team to win it all, but will they find the heart? They always seem to find a way to lose come April. Maybe this is the year for the Caps.

If Things Fall the Right Way …

Pittsburgh: The Penguins have been on survival mode without Crosby, Malkin, and others, but as we already have seen with Detroit this year, you can only survive for so long and it takes a lot out of the guys even when the stars come back.

Tampa Bay: The Lightning may be a year (and a true, No. 1 goalie) away from being legit contenders, but if Dwayne Roloson gets hot, they have a shot this year.

New Jersey: Provided New Jersey pulls off the miracle and makes up another eight points over the final 17 games, the Devils have a shot as they would be the hottest team heading into the postseason. That being said, will they have anything left come playoff time?

Montreal: Carey Price has carried the injury-plagued Canadiens on his back for most of the season, so why can’t he do it fin the postseason? Montreal has a depleted defensive corps, has scored the least amount of goals of any current playoff team, and isn’t a physically tough team, so a long playoff run would require a monster performance by Price.

Maybe will survive a round …

Carolina: The Hurricanes have a minus-10 goal differential and have been inconsistent all season.

Toronto: The Maple Leafs are making a late run at the playoffs, and Phil Kessel is finally looking like the guy they thought they were getting when they traded two No. 1 picks to Boston.

Buffalo: The Sabres have the goalie (Ryan Miller) to steal a round, but not sure they have the depth to get past that (if they can even get in the playoffs).

Atlanta: The Thrashers took some steps forward, but have hit the skids lately.

New York Islanders: After a horrendous start, the Islanders have played much better lately. A lot of solid, young players in place, but moves will have to be made to start contending.

Florida: The Panthers always seem to find their way to the bottom.

Ottawa: Nothing seemed to go right for the Senators this year.

Vancouver: The Canucks have been the best team since November, and seem to have the pieces in place to make a serious run. Roberto Luongo has gotten some rest thanks to the pay of Cory Schneider, and the Sedins, Ryan Kesler and company are playing as well as ever.

Detroit: The Red Wings have survived injury after injury and are still near the top of the league standings. Jimmy Howard needs to step up and prove he’s a big-time goalie this year. 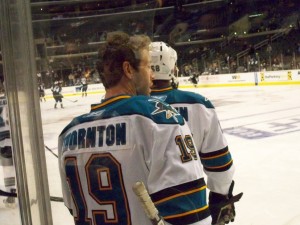 San Jose: Two months ago, it looked like the Sharks may not even make the playoffs. Instead, they seem to be peaking at the right time for once.

Chicago: A team that struggled to find its identity may have finally done so. The Hawks have won eight straight and have not lost since February 18.

If Things Fall the Right Way

Dallas: The Stars were ice cold but have played better recently. Maybe all the trade talk around Brad Richards was a distraction …

Calgary: The Flames have had quite a turnaround, going 15-6 since a 6-0 blasting at the hands of Minnesota on Jan. 19.

Los Angeles: The Kings have a great goal differential (plus-20) and one of the league’s best goalies in Jonathan Quick, but can’t seem to find consistency.

Maybe will survive a round

Phoenix: Too inconsistent and no real home ice advantage. I just don’t see the Coyotes challenging any of the top teams.

Minnesota: If they qualify, the Wild could be a tough out with their defensive system and strong goaltending.

Anaheim: Another team that can’t seem to find any consistencybut could be dangerous if they make the postseason.

Nashville: Of the three playoff contenders currently on the outside, the Predators have the best shot of getting past round one, as they have allowed the third-fewest goals in the NHL behind Boston and Vancouver.

Columbus: The Blue Jackets hung in there a long time, but the West just has too many good teams. If they were in the East, they might have had a shot for a round.

Edmonton: Plenty of young talent, with more on the way in this year’s draft. The Oilers need to find some veteran help to push them up the standings.

Colorado: The Avs looked like a playoff team in January, but have fallen apart since. Maybe Erik Johnson turns into a star in Denver.

(Steve Kendall is a freelance writer who has covered hockey at all levels for 20 years for such publications as The Boston Herald, The Worcester Telegram & Gazette, and New England Hockey Journal.)

1 thought on “Sizing up the postseason”