Poor possession teams like the Canucks are probably not happy to hear what the statisticians have to say.

At 46.5 percent, the Canucks have the second worst five-on-five Corsi percentage in the NHL. Those numbers have taken a beating during the Canucks’ most recent road trip, where they have allowed more than 40 shots on goal in four straight games. Don’t know if research is conclusive, but letting your goalie absorb an inordinate amount of pucks every game is not a good strategy for winning.

No Canuck offers a shining light of hope in the Corsi department. Only Jake Virtanen has a Corsi rating above 50 percent, and for some unearthly reason he cannot even crack the lineup ahead of Brandon Prust.

Jake Virtanen is the only Canucks player to have a Corsi rating above 50% this season. (Bob Frid-USA TODAY Sports)

There are reasons why Horvat is not a poster boy for the Corsi crew, nor is he going to help revive the extinct NHL plus/minus award. It is no secret that head coach Willie Desjardins has entrusted Horvat with almost every important defensive  assignment in Brandon Sutter’s absence. Effectively, Horvat’s possession metrics have faltered since he starts out in his own end so often.

Disclaimer here: I’m by no means an expert on advanced stats. I’ve just begun to scrape the surface, and I’m blown away by the research on stats that exists in the hockey community. This is especially true on websites such as Hockey Graphs, where the research always goes beyond what’s expected.

In terms of Horvat’s situation, I started wondering, is there an effective way to measure Corsi, adjusted by zone starts?

There has been some research on zone-adjusted possession before by Hockey Prospectus, Driving Play, and Vic Ferrari. However, there remains no widely used statistic for the matter.

It makes sense to have some sort of statistic to try and measure Corsi based off zone starts, so I took a crack at it.

Since this stat needs a name, let’s call it Zone-Adjusted Corsi % (ZAC%). Down below is the Corsi% and ZAC% for each Canucks player.

Horvat’s ZSO%Rel is easily the lowest among all regular Canuck forwards at minus-11.41. The next closest Canuck has recently become Linden Vey at minus-5.28, with him and linemate Emerson Etem starting in the defensive zone for most of their shifts.

Even though Desjardins’ has not sheltered Vey, Horvat continues to be the Canucks’ defensive presence at center. Here is his adjusted Corsi% when taking Relative Offensive Zone Starts into account

Although his Zone-Adjusted Corsi% (ZAC%) is still below the 50 percent threshold, it dramatically improves when taking into account how many shifts he begins in his own end. His Corsi% was third worst on the Canucks, but when looking at Zone-Adjusted Corsi%, he jumps to fourth best on the team.

While it was fun trying to come up with a statistic for Corsi with an emphasis on zone starts, there was a glaring flaw with this model.

The Sedins, for instance, saw their Corsi totals take a large dip since they begin many of their shifts in the offensive zone. The Sedins’ possession totals aren’t making eyes pop out of sockets, but the twins (and Hansen) have the lowest ZAC% totals among all Canucks forwards.

Here’s a look at the totals among Canucks players, ranked from best to worst in each category.

Some Canuck forwards have high ZAC% despite not playing well this season (see: Chris Higgins). Higgins ranks high in this category due to having the second lowest ZSO%Rel among Canucks forwards. What the stats do not show is that he was invisible on the ice, and his speed out there had decreased after battling an injury early on in the season. His Corsi% and ZAC% are comparable to Horvat’s, however Higgins’ production was a hindrance. His 0.63 points/60 was lowest among the Canucks’ regular forwards.

When looking at this statistic among other forwards in the league, players who have unusually high offensive zone starts see their Corsi% plummet. Mike Ribeiro, for example, leads the league with a 39.56 ZSO%Rel. He starts more than 82 percent of his shifts in the offensive zone, with a 55.58 Corsi%. However when adjusting his Corsi based on zone starts, it drops to 33.68 percent.

Needless to say, some of the kinks need to be worked out. When applying this stat to players with large differences in zone starts, it needs to be taken with a few grains of salt. Perhaps even with a side of french fries.

I want to look at other NHL examples in a separate post, but for now I will stick with some interesting tidbits from the Canucks examples.

Chris Tanev and Alex Edler are really holding the Canucks’ blue line together. Unless Desjardins cannot avoid it, Tanev and Edler are out there for every defensive zone faceoff. They are fourth and fifth respectively among Canucks defenders in Corsi%, but they are first and second on the team in ZAC%. This is largely because they start so many shifts in their own end, but (in Tanev’s case especially) they are the best puck movers the Canucks have on defence.

Desjardins is sheltering the rest of his defence by placing them in optimal situations. Other than Tanev and Edler, no Canucks defenceman has a negative ZSO%Rel.

Luca Sbisa, Alex Biega and Matt Bartkowski are all bottom three on the Canucks in ZAC%, with Ben Hutton and Yannick Weber not trailing far behind. Of those defencemen, Sbisa is the only one who is not being sheltered by Desjardins, even though his possession metrics are pretty horrible. 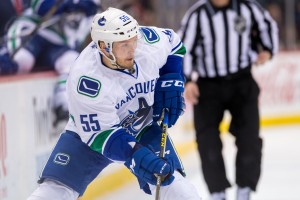 Alex Biega has been applauded for stepping up on the Canucks blue line, however the advanced stats aren’t kind to him. (Brad Rempel-USA TODAY Sports)

Still, it is concerning to see the rest of the Canucks’ defencemen post such bad Corsi% and ZAC% despite starting many of their shifts outside of their own end.  Bartkowski surprisingly has a long leash with Desjardins despite bad possession and high turnover numbers. Biega has been a feel good story for the Canucks after slugging it out in the minors for years, but his possession numbers are poor considering that he has been the benefactor of so many offensive zone starts.

Of course, other factors come into play. The Canucks are the worst faceoff team in the league, so regardless of where their shifts begin, they are not usually coming away with the puck. In addition, this defence is weak compared to the rest of the league. Hutton has shown strong puck-moving ability as a rookie, but you could make the case that none of Sbisa, Biega, Bartkowski or Weber belong on the top six of any vaunted NHL defence.

One stat does not tell an entire story, but if one thing is clear, it is that the Canucks are not good at defending as a team, relying too much on too few players.

Having your goalie bail you out night after night can only last so long.