A lot of things have changed for the St. Louis Blues since David Perron played his last game on Jan. 17. They seem to have a new starting goaltender; they’ve climbed back into a playoff spot; and they’ve even added a new face into the clubhouse in Michael Del Zotto, a trade deadline acquisition from the Anaheim Ducks.

In all that time, the team has missed their veteran winger, who returned this summer for his third stint in St. Louis on a four-year, $16 million contract. Even after missing two months, he is fourth on the team in points, and the Blues were desperate to get his scoring touch back in the lineup.

Now, Perron is back, and after one game, it looks like he hasn’t missed a step.

Before he succumbed to injury, Perron had the league’s longest active point streak at 13 games. In every game from Dec. 22 to Jan. 17, the day of his injury, he collected at least one point, totaling 15 in that time. He left with 35 points in 45 games, proving that he was exactly what the Blues were hoping to get by signing him. 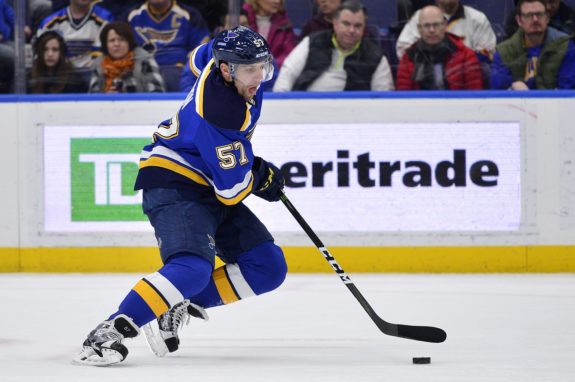 No doubt some of Perron’s success was a result of the chemistry he found with Ryan O’Reilly, whom the Blues acquired in the offseason from the Buffalo Sabres. He is having a career year in his own right, scoring close to a point-per-game and eclipsing his previous career high of 64. The two in tandem have been electric, and helped buoy the team through the winter, including when Vladimir Tarasenko had his worst career month in December.

It seemed like nothing could slow the French Canadian, until he suffered an injury in that Jan. 17 game against the Boston Bruins. His prognosis was a serious one, and it left fans wondering whether he could return in the same form.

Though it was never confirmed by the team, as it was hidden under the label “upper-body injury,” it was widely reported that Perron’s injury was a concussion. This was troubling, as he has a history of serious concussions in his career.

The most notable of these was the concussion he received in Nov. 2010, after a brutal and illegal hit by NHL legend, Joe Thornton. Perron crumpled to the ice after taking Thornton’s elbow to the temple and did not return to the game. In fact, he did not return that season, and he missed 97 games in total before finally being cleared to return to the ice.

Joe Thornton, an NHL legend, was suspended two games for the hit that cost David Perron almost 100 in 2010 (Amy Irvin / The Hockey Writers)

Perron opened up about his injury and recovery to the Puck Daddy blog in 2011, explaining the unique difficulty of concussions. Unfortunately, it would not be his last, and his most recent battle had fans worrying about his future.

Those worries were ultimately unfounded, as Perron returned to the lineup Saturday against one of his former teams, the Pittsburgh Penguins. His return came at the right time for the Blues, who were stymied by the Ottawa Senators a few days before, falling 2-0, and in desperate need of offensive relief.

It was an emotional day for Perron as he returned to the @StLouisBlues: "It's so hard mentally and physically to be out of the lineup with this type of injury. Honestly the first couple laps in warmups, I think I cried a little bit… I was just really excited." pic.twitter.com/3Rh0KnATG0

Unsurprisingly, the return was a stirring one for the winger, who admitted that his emotions overwhelmed him in pre-game warm-ups. No one can fault him for that reaction, as a return from yet another concussion is understandably poignant.

But the emotions didn’t affect his play on the ice. In the middle of the first period, Perron dumped the puck in behind the net, fought it away from a Penguins player and dished it to O’Reilly. He connected with Vince Dunn on a pass, who unleashed a shot and scored his 10th goal of the season. The secondary assist not only proved that Perron was back in form, but it extended his point streak to 14 games, a personal best and a top seven streak in franchise history.

He was understandably all smiles after the game, and it was clear what the return and assist meant to him. Now that the Blues have Perron back, they are closing in on playoff form. Here’s hoping he avoids any further injury in the future.