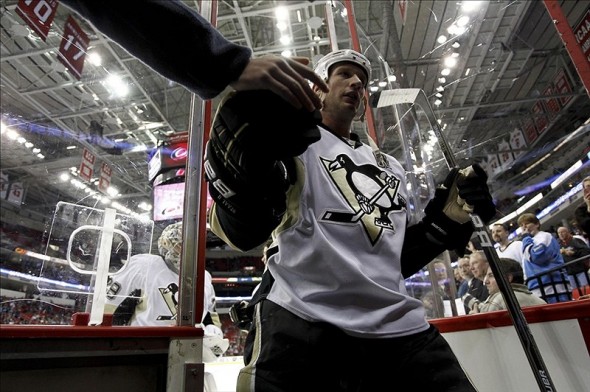 Jordan Staal woke up on Friday as both a bachelor and a member of the Pittsburgh Penguins.

By night’s end, he would be neither.

Staal took the ultimate plunge that evening, getting married to his longtime girlfriend in his hometown of Thunder Bay, Ontario. Around the same time vows were exchanged, Ray Shero traded the 23-year-old to the Carolina Hurricanes, where he’ll join his older brother, Eric.

I wrote a column last month suggesting that the ‘Canes would be a good fit for Staal, and that Brandon Sutter, the No. 8 selection and an additional pick/prospect would be a fair return. That’s exactly what went down at the CONSOL Energy Center on Day 1 of the 2012 draft, the “pick/prospect” being Brian Dumoulin, a two-time NCAA National Champion with the Boston College Eagles.

Simply put, this trade makes sense for both sides. In an occurrance rarer than a Venus Transit, the Hurricanes decided to make a push for an elite forward this summer, and they got their man in Staal. The Penguins, who found out on Thursday that Jordan probably had no interest in signing an extension, got about as much value out of the deal as they could have hoped. 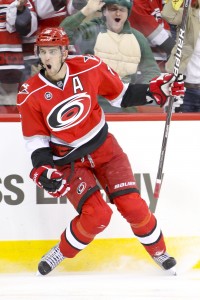 Staal will jump right into Carolina’s top six and improve the team at both ends of the ice. He’ll likely contribute to the power-play and penalty kill, which ranked 20th and 22nd in the league last year, respectively. Whether or not he plays on the same line as Eric remains to be seen, though it’s likely we’ll see a few different combinations in the early portion of the 2012-13 season. As I’ve said in the past, putting the brothers together would be beneficial on two major levels. First, you have to think they’ll have excellent chemistry and raise each other’s game. And second, sliding Eric over to the wing will relieve him of many of his defensive responsibilities, which he struggled with last year quite a bit.

For Pittsburgh, Sutter will immediately fill in Staal’s former role as a third line center and top penalty killer. Having scored 21 goals in 2009-10 at the young age of 21, the 6’3” forward has a lot of potential and will fit in nicely behind Sidney Crosby and Evegni Malkin on the depth chart. While he isn’t as talented as Jordan Staal, Sutter could certainly become one of the best No. 3 pivots in the NHL in the coming years as he prepares to enter his prime.

Dumoulin was one of Carolina’s top prospects, and he’ll likely crack the Penguins’ roster in the next two years, perhaps even sometime in 2012-13. Pittsburgh doesn’t exactly have a shortage of promising young blueliners, but Dumoulin has a very high ceiling and is a proven winner. While it would be unwise to say that he was expendable for the Hurricanes, the amount of up-and-coming rearguards in their system made this concession easier to cope with.

Shero went on to use the No. 8 pick on another D-man, Derrick Pouliot, who’s spent the last three seasons with the Portland Winterhawks of the Western Hockey League. Very few people had this kid pegged as a top 10 prospect, but to be fair, there were a lot of selections on Friday that weren’t expected. Formerly the No. 1 overall choice in the WHL Bantam Draft, Pouliot is said to be the best passer of this year’s class of defensemen, and that’s saying something considering how many strong blueliners there were for the taking.

Once the dust had settled, the two general managers involved gave their thoughts on this monumental transaction, each admitting that they conceded a lot in what should go down as a fair trade.

“When you’re acquiring an elite player you have to give a lot for it,” Carolina’s Jim Rutherford told the News & Observer. “And we did. We paid Pittsburgh a good price.

“We love Brandon Sutter. It was really hard to let him go. He’s been a very good player for us and has a very good future ahead of him. … But when you get into a deal like this you usually give up something you don’t want to give.”

“It’s a funny thing to say, but it just felt right to do,” Shero said to ESPN.com. “It’s the right place for (Jordan) hopefully and it’s the right deal for us most importantly. Hopefully both parties are going to be real happy.”

The next step for the Canes is to get Staal a new contract, as his current deal expires July 1, 2013. It’s hard to imagine this will be much of an issue, given that they have lots of room in the budget and that his sibling is the team captain.

In getting rid of Staal and sending Zbynek Michalek to Phoenix, the Penguins unloaded a significant amount of salary on Friday, perhaps signaling a busy summer ahead. With the amount of room they now have under the cap, speculation will begin to run wild in the coming weeks, as high profile players like Zach Parise and Ryan Suter become available.

Carolina now has three of the four Staal brothers in the organization, the third being Jared, who saw time with the Charlotte Checkers last year. Marc, the lone defenseman in the family, is the odd man out—at least for now. He could hit the free agent market when his contract with the New York Rangers comes to an end in 2015, and it would be one hell of a story if the Hurricanes made an attempt to sign him.

Having allowed the 25th most goals against last year, Carolina could definitely use another strong blueliner, after all.

Andrew Hirsh is a credentialed NHL writer based in North Carolina
Follow him on Twitter: @andrewhirsh | Email: ahirsh3@gmail.com