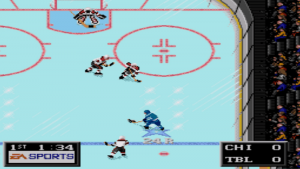 At long last the Stanley Cup Final is here.

The Tampa Bay Lightning and Chicago Blackhawks have had to scratch and claw their ways to the final round for the chance to lift the greatest trophy in all of professional sport — The Stanley Cup. It’s a battle of teams that feature two of the league’s top players in Tampa Bay’s Steven Stamkos and Chicago’s Patrick Kane.

Of course, no one wants to wait to find out who will win it all. That’s where your friends at The Hockey Writers come in!

Each game day, we will provide a simulation of the matchup via a version of the classic hockey video game NHL 94 that includes updated logos, jerseys and rosters. That’s right, you get to see Stamkos, Kane, Jonathan Toews and Tyler Johnson as players in a game from 22 years ago. It’s amazing what technology can do.

Will Ben Bishop stand on his head in a way that led the Lightning to a 2-0 Game 7 victory over the New York Rangers in the Eastern Conference Finals, or will it be Corey Crawford standing tall for the Blackhawks? Will the “triplets” line of Tyler Johnson, Nikita Kucherov and Ondrej Palat continue to shine in for Tampa Bay, or will Duncan Keith, Brent Seabrook and the rest of the Chicago defense keeping the rising stars in check?

Game 1 features some big saves, a major injury and a thrilling finish that can only be described as Stanley Cup worthy, but which team came out on top to take a 1-0 lead in the best-of-seven series? The answer is within the game!

So, without further delay, here is The Hockey Writers’ simulation of Game 1 of the 2015 Stanley Cup Final in NHL 94. Enjoy.


on’t forget to check back on Saturday for Game 2 of the Stanley Cup NHL 94 sim, exclusively on The Hockey Writers.