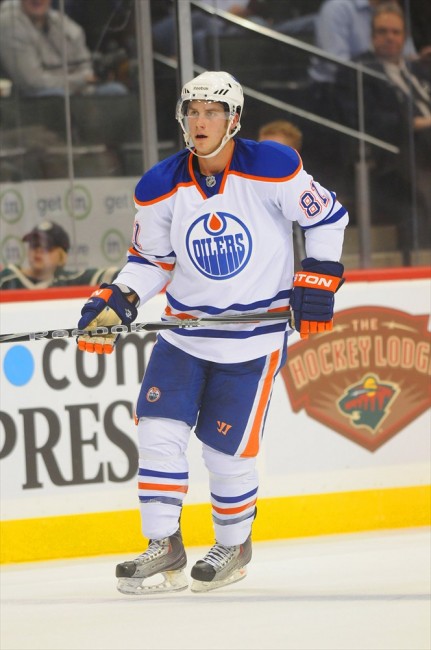 The Edmonton Oilers 2011-12 season is one where there has been plenty to talk about, and most of it not on the positive side.  They remain near the bottom of the NHL’s standings, which I guess depending on your view of their current state could be a good or a bad thing.  The fact is they have been on the losing end more than the other way around.  Inconsistent play from all positions, especially goaltending and defence have been a source of frustration for Oiler fans, as has a multitude of injuries that has affected most of the roster at one time or another.  Taylor Hall being out for the remainder of the year appears to just be the icing on the cake.

There have been bright spots on the year, front and centre being the emergence young stars Jordan Eberle, Ryan Nugent-Hopkins and Hall, among a few others, providing optimism and hope for the future of the franchise.

There is one other bright spot, and that is the fact that Oiler prospect Taylor Fedun is back practicing and was skating for the first time this week, six months after his gruesome injury.

Fedun was injured in training camp on September 30 in a game against the Minnesota Wild where he was going back after a puck on an icing call and got tangled up with Wild forward Eric Nystrom and was slammed into the boards.  The result was a broken right femur.

It is an injury very similar to the one former Edmonton defenceman Kurtis Foster suffered when he was a member of the Wild.

“To be honest, I was hoping and wishing I would never have to see anyone go through what I had to recover from,” said Foster. “I really hope this will lead to the changes of the icing rule that need to be made!” – Foster

A product of Princeton University, Fedun was expected to be out at the very least for this season, with his career possibly in jeopardy.  The injury was so severe he had a titanium rod from his hip all the way down his leg held in with screws. While he will still not play this season, the fact he is back skating and practicing with his teammates is a very positive sign.  He still has a long road to recovery, but has come along way so far and has done so with a great attitude all the way along.  He has gone from wheelchair to crutches now to skates in the span of six months.  Oilers correspondent Gene Principe writes in his blog:

“To think of that night and a young man whose heart was almost as badly broken as his leg laying there wondering if he would ever walk normally again, let alone play hockey. To see him end up where he was and what he was doing Monday is nothing short of a miracle. Maybe medically it was always forecast to be a possibility but it’s hard to believe it’s realistic when morphine or painkillers help you get through the long days and nights of pain. Those feelings have subsided and now gloom and doom has given way to optimism and hope that this kid can make it all the way back to the cusp of where he was a few short months ago.”

Fedun, a hometown boy from Edmonton, signed a two year entry level deal with the Oilers in March 2011 after he finished a four year career at Princeton University, the final where he was team captain and was named to the NCAA East All-American Second Team and First Team All ECAC.

He was also the biggest surprise in Oiler training camp this past fall and was challenging for a spot on the Oilers blueline for opening night.  Unfortunately the events on September 30 put an end to that dream, at least for now, but he definitely left an impression on Oiler’s management.

The 23 year old defenceman turned heads in camp for his ability to play a sound positional game and impressed with his high hockey IQ.  Fedun is a mobile, puck moving defenceman who the Oilers are hoping will be able to compete for a spot on their roster next year, or at the very least gain a spot and some valuable experience in the AHL with Oklahoma City.

Fedun has become an inspiration to many, not only for his perseverance and hard work in trying to get back to playing, but for his character.  He was able to forgive Nystrom soon after for the incident, which one can imagine was a difficult thing to do with all of the pain and frustration that followed.  He has shown maturity and just what kind of person he is through the whole process, focusing on his rehabilitation and the support from his teammates and family through his difficult path to recovery.  Such intangibles are qualities the Oiler’s are no doubt thrilled to have in their organization.

Next year is still a long way away, and I’m sure Taylor Fedun is not looking past his current rehab, but regardless, it’s a welcome sight for Oiler fans to see him back on skates and optimistic about his recovery and future with the team.