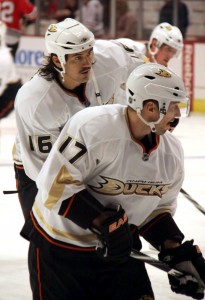 The 2011-2012 Ducks defense may not have the same big names as future hockey hall of famers Scott Neidermayer, or Chris Pronger, but this years version of the Ducks defense will be a huge part in determining the success of the team. From the first goal of the season by defensive prospect Nate Guenin, to the 1-0 shutout of the San Jose Sharks in the 3rd game of the season to Francois Beauchemin’s Heroics returning from getting a puck to his visor leaving a lot of blood over his left eye to come back in the game and play a key role in holding a 3-2 lead over the Sharks. It is apparent that this Ducks defense will determine the fate of how far up or down the standings of the western conference the Ducks will go. Especially with the statistically slow starts the ducks big line of Corey Perry, Ryan Getzlaf, and Bobby Ryan and the ducks are still 4-1 it has been even more important. Of Course those three will likely come around to take some pressure off, but in the games they don’t Defense and Goaltending in Anaheim will be key.

In the off-season Bob Murray did little to change the Ducks blue-line with the only move was trading the under-achieving Andy Sutton for Kurtis Foster another player who could use a change of scenery after not playing as well as Edmonton had hoped after coming off a career year in Tampa Bay the year before.

With a top pairing of Lubimor Visnovsky, and Toni Lydman Ducks coach Randy Carlyle has two defensemen who really compliment each others playing styles and also eat up a lot of minutes during each game. Visnovsky is a great offensive-defenseman who led the entire NHL last year with 68 points. Small for a defenseman Visnovsky’s strength is his great speed and his ability to lead a rush and set up the power play. With only 1 assist in the first 5 games look for Visnovsky to start putting up points soon. His partner Lydman is a perfect partner for him because he has a more stay at home defense style that lets Visnovsky get creative offensively without having to worry about what happens if he turns the puck over. Lydman was so good defensively last year that he was second in the NHL in +/- to only Zdeno Chara with a +32. Since he doesn’t put up the points of Visnovsky or deliver the big hits as Beauchemin, or Luca Sbisa it may take a few games of watching him to realise just how important he really is to the team. He is without a doubt the best shutdown defenseman the ducks have and one of the better ones in the league. Lydman missed the first two games of the season recovering from shoulder surgery he had in the off-season but he seems to have recovered fine, because he is already playing at a high level.

The Ducks second pairing is also a strong one Beauchamin, and Cam Fowler. When Beauchamin was a Duck the first time around he was most often paired with Scott Neidermayer. Beauchamin is one of those players that always seems to be most effective when he is playing physical. He is one of those players that is really hard to play against because not only is he physical he is also a very smart player. If the Ducks are holding on to a one goal lead late in a game Carlyle will often pair up Lydman with Beauchemin near the end of the game to stop the opposing team with the extra man late in the game. When Fowler played for the Ducks last year he became the second youngest Duck to play in a regular season game (only Oleg Tverdovsky was younger). Fowler is a very fun player to watch. He is such a great skater, and can get very creative with the puck. Often times he gets compared to Scott Neidermayer as both seem to be a step ahead in the play. He had 40 points last year which is great for a rookie defenseman, but he was a team worst -25. Some of the bad +/-  can be explained by inexperience, but another reason could be that he had many different defense partners throughout the year so he was often getting used to new partners on a regular basis. This year looks to be different as he looks to be paired with Beachemin for most of the game, so that seems to have helped his defensive side of the game. There is a ton of potential here, and if he progresses could end up being an all-star type defenseman.

Before the pre-season it looked as though the 3rd pairing would be Sbisa and Foster, but Foster missed the pre-season with a knee injury, and Sheldon Brookbank took his spot as the 6th defenseman. Sbisa like Fowler is another young defenseman who had an impressive rookie season last year. He has a more physical style of play and can deliver a big hit if he can line an opposing player up. Every now and then Sbisa can be caught out of position, but its something he has improved on and in the early going of this season apears to be improved this year compared to last. Hopefully Sbisa continues to get better and can be a big impact player in years to come. Brookbank has been a pleasant surprise this year. After often being a healthy scratch last season and only playing 40 games. He has had a terrific start to this season with a team leading +4, and his 1 assist already beats his point totals from last year when he had none. Brookbank is a tough customer, and will drop the gloves when needed. He seems a little quicker this year as well. If he keeps up this good play it may be a while before Carlyle will insert Foster into the line-up.

I have been a ducks fan from the beginning. The first hockey game I ever attended was a pre-season ducks game before they have ever played a regular season game. Since then I have been hooked! I will talk anything ducks and would be happy to answer your questions. feel free to email me at jeffshibley@aol.com