The Blue Jackets should trade Jack Johnson. It sounds really easy doesn’t it? The problem with Johnson is that he is a bit of an enigma.

He is the worst, best player that I have ever seen and the best, worst player. I know that it doesn’t really make any sense, but that is the best way that I can describe him. Columbus could get a decent return for him, and in many ways it would be addition by subtraction. Here is my case for why this needs to happen. 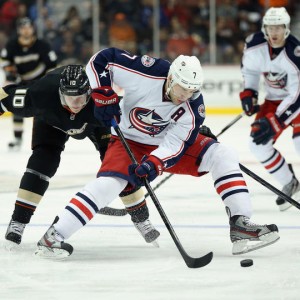 There are quite a few reasons that Columbus should trade Johnson, not least among them is his cap-hit of $4.4 million (per General Fanager). Right now with the Blue Jackets salary cap situation, they cannot afford to sign any free agent help. They are $3.7 million under the cap, and most of that is reserved for possible incentive bonuses kicking in for certain players contracts. $4.4 million would go a long way towards signing a free agent defenseman or two.

Jackets GM Jarmo Kekalainen on Jack Johnson’s brutal Corsi numbers: ‘Give me a break with that’ http://t.co/HYHseeC2X0 #lmao

“Jack Johnson is the bane of the advanced stats community, and for good reason. Johnson’s Corsi For (The number of on-ice shot attempts on goal, missed, or blocked taken by the players team as defined by War On Ice) % has never been over 50%. His lowest number being 40.8 in 2007-08, and his highest 49.1 in 2009-10. In addition, his Relative Corsi numbers are bad as well. Relative Corsi is an indicator of how well his team controls the puck when he is on the ice versus when he is off of it. Johnson has only had one season with a positive Corsi Rel, ironically that being last season with a 0.2. his worst was in 2007-08 with a -8.6. Johnson is skilled and has the ability to be a game changer in a positive, and negative way. If he can get his game together, he could be a star, but now you have to take the good with the bad.”

He did improve towards the end of last season, but he is 28, so how likely is it that his career arc changes? Here is a good article from Sports Illustrated to help me make my point.

Johnson is highly overvalued in some NHL circles, so if Columbus General Manager Jarmo Kekalainen could find a good, or gullible, trade partner a solid return could be had. I would look for a young, mid-level defender and a pick.

Obviously, there are a lot of variables, but look at what the Pittsburgh Penguins got in return for Brandon Sutter. Sutter was an overpaid, underperforming player that got a lot in return. A better third line center replacement, a defensive prospect, and an upgraded draft pick. Vancouver overvalued him, and as a result, Pittsburgh got a veritable king’s ransom in return. Why couldn’t Kekalainen get even a fraction for Johnson?

Johnson is popular among his teammates and fans, so moving him would be difficult at first, but when the results start to show, I think people would easily move on. Columbus needs help on the blueline, and moving Johnson in the right deal would help in many ways.