I started this series by giving a little bit of background information regarding why the Bruins are so broke, so I won’t rehash it for you all over again. If you haven’t read it, you can catch up here; if you have, let’s move on to looking at the kind of solutions we have.

For most NHL fans, CapGeek.com is a really, really good place to look up all things money. On particularly slow days, I find myself trolling the ‘Armchair GM’ section, building teams for myself when I should be doing laundry or writing articles.

One part of the site that many people don’t take as much advantage of as they could, though, is the depth chart. This is the handiest feature ever invented for any website, ever. Literally- ever. It not only shows us how broke we are, but how uneven our line depth is at the moment- not just from a player volume standpoint, but from a financial (and, therefore, we can assume skill-wise) standpoint. I’ve created a pie chart, showing where exactly our money is going position-wise, assuming we take all of our current restricted free agents back at a market-value qualifying offer- 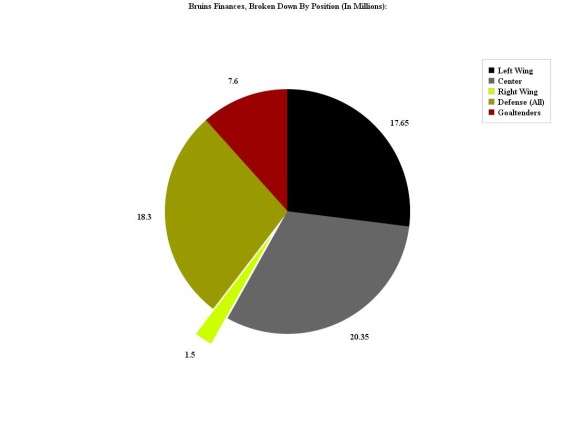 It’s a little grainy, but you get the picture. The merlot pie piece represents goaltenders- we currently have seven point six million reserved for Tuukka Rask and Niklas Svedberg. Then, we have eighteen point three million tied up in defense. Look at our forwards, though- the black pie piece represents money put towards left wingers, and grey towards centers- yet that little, teeny sliver of gold? That’s how much of the salary cap is currently promised to right wingers.

I think you see why I like CapGeek so much. Bruins fans have been underwhelmed by the lack of trades made so far- yet, they haven’t taken the time to look at the numbers, and realize where the problems truly lie.

Of course, some of these numbers are a little misleading. Marc Savard contributes almost four million to the total amount of cap space tied up in centers, and after the first game, he’ll be placed on long-term injured reserve- which, from here on out, I’ll simply refer to as LTIR. The league dictates that those four million can’t be touched until Savard is placed on LTIR, which a team is unable to do until the first regular season game has been played.

In addition, I chose to group all the defensemen together, as is shown on CapGeek; in reality, the team has much more money tied up in right defense than it does in left.

Next, let’s look at the depth in Providence:

The numbers I used in the chart above probably aren’t going to be accurate. Not only has Matt Bartkowski filed for salary arbitration, but fellow blue liner Torey Krug is also due for a pay raise. Krug was the only undrafted player to be named to this year’s All-Rookie Team, and scored more goals- both of even strength and on the power play- than any other rookie defenseman in the league. Based on this, it’s safe to say that CapGeek’s suggested qualifying offer for Krug of $874,000 is probably going to be a gross underestimation.

Let’s not get ahead of ourselves, though. Assuming that both every salary I plugged into my pie chart is accurate and every player I accounted for will be with the team next year, the Bruins are currently hovering at around $65.4 million dollars in salary cap space already taken. That leaves, give or take, about four million in wiggle room until October. 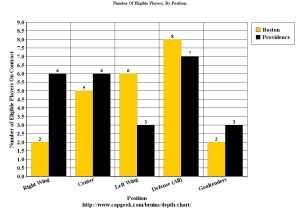 This means that it’s almost certain that Chiarelli is going to have to fill in the majority of the holes in the roster with players from Providence. This is convenient- because it seems the less money we have already tied up in a particular position, the more eligible players we have waiting in Providence to fill the void. Looking at the chart on the right, where yellow represents the number of players per position in Boston, and black represents the number of players per position in Providence, Chiarelli has balanced things far better than most fans realize.

Providence has an ample number of forwards, such as Ryan Spooner, Matt Lindblad, and Anthony Camara, who have enough experience in the system to potentially get moved up to fill the voids in Boston’s system. In addition, newly signed defenseman Linus Arnesson has been the breakout star of development camp, and both Joe Morrow and Dave Warsofsky look to be shaping up quite nicely.

How this fits in to the Salary Cap:

Boston has one saving grace in this whole salary cap fiasco. Marc Savard, who has been on the LTIR list since 2011 due to post-concussion syndrome, will provide the team with four million dollars once the first game has been played. Four million dollars may not seem like a lot for a team that’s still upset over the loss of Jarome Iginla, but it can create a whole lot of breathing room for two-way contracts given to Providence players who get moved up to the NHL this year.

Of course, this doesn’t solve all of the team’s problems. Iginla was one of the team’s thirty-point scorers last season- and as I suggested in my reactionary piece on Free Agent Frenzy, the team will be hurt if they can’t bring on at least one more twenty-point forward, who will undoubtedly cost significantly more than the young players ready to move up.

Certain players cannot be disposed of. No one is going to sacrifice a veteran of high-caliber play such as Milan Lucic, Patrice Bergeron, David Krejci, or Zdeno Chara- it would be like taking two steps back in order to take one halfhearted step forward. In contrast,though, it would take far too many of the younger players like Dougie Hamilton and Kevan Miller to clear up enough cap space for an experienced, solid scoring forward.

This leaves Boston management with a few players to work with. Brad Marchand had been consistently inconsistent over the past few seasons, making as many incredible plays as he does bone-headed moves; he has a modified no-trade clause, meaning he’s harder to move, but his $4.5 million dollar cap hit is only worth it about eighty percent of the time. Fans would hate to see him go- and Chiarelli has insisted he won’t be shopping the winger- but it might be necessary.

Another player who would be painful but prudent to part with is veteran defenseman Johnny Boychuk. It’s likely that anyone moved out of Boston is going to be a defenseman, since- with eight roster players and at least three in the minors who are shaping up to be NHL-ready sooner rather than later- this is the only area where Chiarelli has a true surplus. Boychuk’s no-trade clause, which had been modified to allow a fifteen-team trade list should Boychuk need to be moved, officially ended May 31st of this year. Boychuk is another player with a high cap hit, coming in not far below Marchand with $3.6 million taken up by him alone, and he’s still young enough that he could prove to be very movable.

Of course, should the Bruins need to, it’s always possible for them to make a package deal out of some of the younger players, although that might not be something Chiarelli is willing to do. Packaging Matt Bartkowski, who was all over the place last year, with someone young but valuable like Adam McQuaid and someone less savory but still developing- for example, the ever-controversial Jordan Caron- could not only bring the B’s some cap relief, but could even fetch them a nice trade, in the mix. I go into more detail on that here.

Of course, even if we free up the space- who do we take? That’s an important question; feel free to comment below and tell me who you think Boston’s management should bring in for the right side offense, should they make the proposed moves mentioned above.